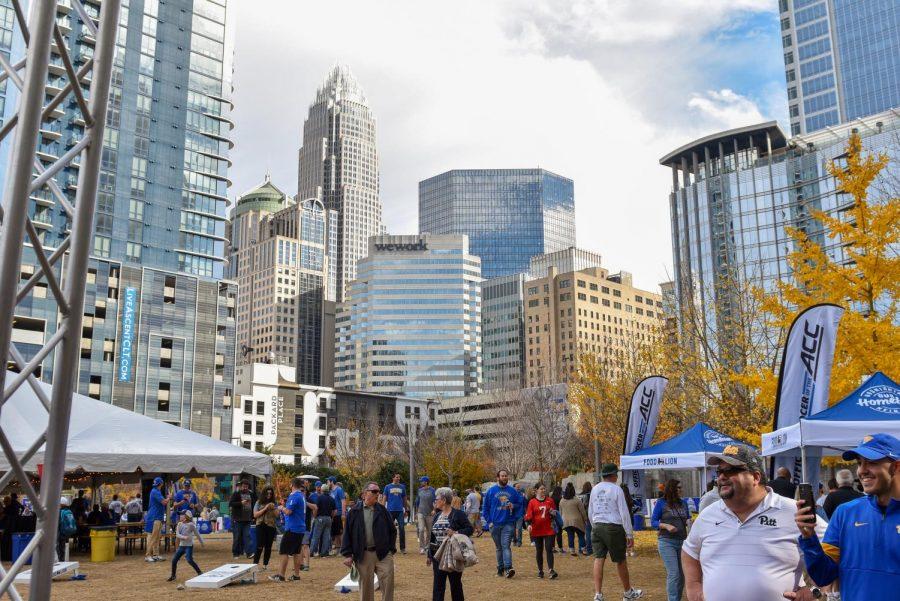 The skyline of Charlotte, North Carolina, looks over the ACC Fan Fest on Saturday afternoon.

CHARLOTTE, N.C. — Troy Washington, a former Pitt free safety from 1984-88 and captain in his senior year, hasn’t been to a Pitt football game in about two decades. He was ready to end that streak on Saturday.

“I had a lot of good years at the University of Pittsburgh,” Washington said. “This is probably the first game I’ve been back to in 20 years … the way everybody is falling off of the world, couldn’t be a better time.”

Pitt football is experiencing its most successful season in recent history, reaching the 10-win threshold for the first time in four decades. There’s buzz and an expectation for greatness surrounding the team that many liken to the legendary teams of Pitt’s heyday in the ‘80s.

Washington said a win Saturday evening at the ACC Championship Game against Wake Forest would be a step in the right direction to getting back to vintage Pitt football — a style of play he knows firsthand.

“This is a good stepping stone for us starting a new year,” Washington said. “Now we can get back to real Pitt football.”

Charlotte, North Carolina, is nearly a seven-hour car ride from Pitt. But that didn’t stop current Pitt students and alumni from making the trip to see their Panthers compete for a conference championship. From camping outside the William Pitt Union in the snow to taking a long and grueling bus ride, fans were determined to make the trip.

As the sun shone down on Charlotte’s Romare Bearden Park, the site of ACC Fan Fest, a sea of blue and gold danced to the tune of “Sweet Caroline” while enjoying live music and a beer garden. Despite the game not kicking off until 8 p.m, this didn’t stop Pitt fans from getting out of bed bright and early to kick off their day.

While there were a number of Wake Forest fans in attendance, Pitt fans dominated the event and neighborhood streets, with nearly every shirt emblazoned with the Pitt script. Fans were sure to point out that the Panther faithful outnumbered the Wake Forest crowd by a sizable amount.

Michael Harris, a senior business major, said he’s impressed with the number of Pitt fans who made the trip.

“I’ve seen a total of six Wake Forest fans in my hour and a half in Charlotte,” Harris said. “They seem like good people, but I haven’t seen many of them.”

Pitt has been to the championship game once before in 2018, and came home empty handed after falling to the Clemson Tigers 41-10. Redshirt linebacker Phil Campbell III described the feeling as much different this time around — last time the team was just happy to be there. This time around, it was championship or bust.

“This is my second time there,” Campbell said. “Last time, I feel like we were very happy just to be there. This year, we’re not fulfilled at all. We’re not just happy to be there — we’re trying to win. We know we can and we know we should.”

Fans felt similarly to Campbell — they wanted to see a victory.

Lowe is enjoying the camaraderie this time around in Charlotte, as he said the Wake Forest fans he has interacted with have been nothing but nice — unlike the last time he made the trip.

“The Clemson fans were not very nice,” Lowe said. “Wake Forest fans really have a lot of class. It’s nice to be playing against somebody where everybody smiles and says ‘good luck.’”

For many fans, this is the first time in their lifetime that Pitt has won 10 games in the regular season. Being able to see the team have such a successful season was a special feeling to some. On the other hand, for those who witnessed Pitt’s national title runs in the ‘70s, a return to the national stage of college football is a breath of fresh air.

Nelson Berardinelli, a 1980 alumnus, said he’s been a die-hard Pitt fan since 1976 — when the Panthers claimed the national title.

“My first year at Pitt, we won the national championship,” Berardinelli said. “It was the first college game I ever went to. Obviously, I became a Pitt fan in 1976. A guy by the name of ‘[Tony] Dorsett,’ I watched him run around and I got hooked.”

Despite living nearly 500 miles from the Queen City in Western Pennsylvania, Berardinelli said he refused to miss an opportunity to watch his beloved Panthers hoist another trophy nearly four decades later.

“We came because we might not know if Pitt will be back here for the next 10 years,” Berardinelli said. “I’m not missing this opportunity to maybe win a championship.”

Berardinelli is not alone in feeling uncertain about when Pitt will be back in Charlotte to play in an ACC Championship game. A common sentiment from Pitt fans is that with redshirt senior quarterback Kenny Pickett at the helm for one last ACC game, this is Pitt’s best chance to raise the conference championship trophy.

Pitt fan Mark Shemanski said he hopes to see Pickett in New York for the Heisman ceremony for all he’s done for the program this year.

“I’ll tell you what, Kenny Pickett is just amazing,” Shemanski said. “I hope he wins the Heisman. I hope they give him a chance.”

Pickett has maintained all season long that the national recognition is a tribute to his teammates just as much as it is to him. Shemanski was sure to credit Pitt’s other nationally acclaimed player — sophomore receiver Jordan Addison.

“And you’ve got Addison who’s possibly going to win the Biletnikoff,” Shemanski said.

Washington said while he’s confident Pickett will keep up his dominant performance on Saturday evening, he also predicted that the defense will step up and play the way he and his teammates did in the ‘80s.

“We’re gonna win,” Washington said. “The defense is going to step up and play for us because Pickett’s going to do something — we know that. Pickett is going to hold his end, now we need the defense to hold up.”

The game against the Wake Forest Demon Deacons will kick off at 8 p.m. and air nationally on ABC. Pickett is looking forward to putting on a show for the fans who made the trip and finishing off what he and his teammates started — winning an ACC Championship.

“Everything we’ve worked for is right in front of us,” Pickett said. “I’m really excited to have one more chance in a championship game. I know we’ve all been working hard for it and we’re all looking forward to it … we’ll be ready to go.”