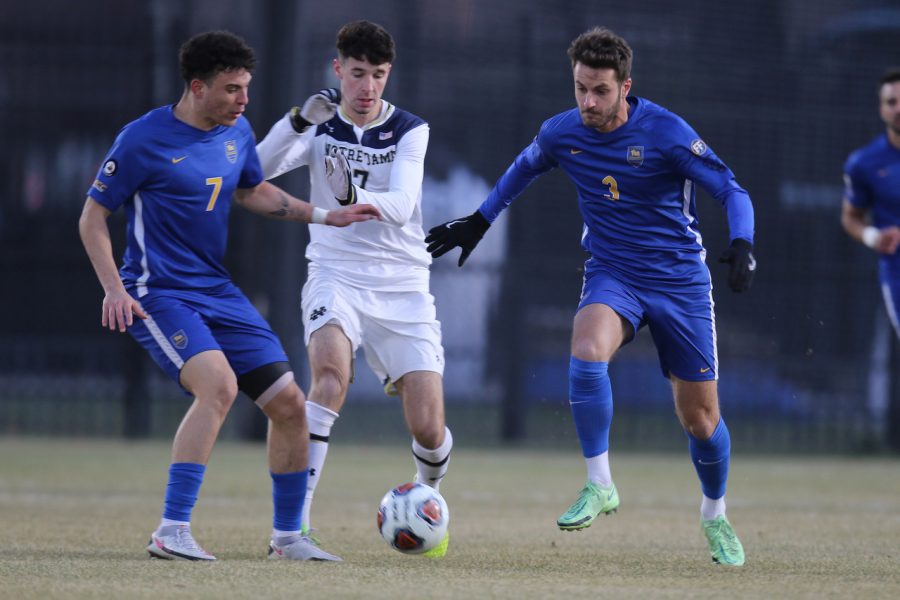 After a strong start to the NCAA tournament, No. 5-seeded Pitt men’s soccer fell yet again to the Notre Dame Fighting Irish in the quarterfinals of the NCAA Tournament in penalty kicks.

The Fighting Irish hosted the Panthers on a chilly Saturday evening, under the lights at Alumni Stadium.  After scoring in the first half, the Panthers gave up a goal in the second, sending the match to penalty kicks, where they lost 4-2.

A strong regular season propelled Pitt to the No. 5 seed in the NCAA tournament and it began the tournament well, defeating both Northern Illinois and Hofstra to reach the quarterfinals. The Panthers faced their first significant challenge of the tournament in the form of No. 4-seeded Notre Dame, a team which the Panthers have lost to in their last two encounters.

It was a back-and-forth battle from the opening whistle. Both defenses played clearance soccer, emphasizing the importance of conservative play. Each also created a handful of chances for some strong shots at the start of the game, but none found the back of the net. As the game approached the end of the first half, both sides slowed their attacks, settling for possession play. Pitt graduate keeper Nico Campuzano showed off his skills with solid saves.

The Panthers began applying pressure with just over five minutes left in the half and it paid off, as Pitt drew first blood against the Fighting Irish. It was the first goal conceded by the home team in more than 600 minutes of play, since the ACC tournament’s start at the beginning of November.

A Notre Dame defender deflected a shot by graduate defender Jasper Löeffelsend and the ball fell inside the box, giving first-year attacker Guilherme Feitosa the opportunity to send a diving shot past the Notre Dame goalkeeper Bryan Dowd.

To begin the second half, Notre Dame came out fighting. It began to employ intense pressure, putting the Panthers on their heels. Pitt graduate midfielder Matt Bailey received a yellow card in the 50th minute after a strong tackle in the midfield and Notre Dame’s pressure continued, causing Pitt to commit more fouls. Finally, one of these fouls gave Notre Dame the equalizer they were searching for.

A strong Löeffelsend tackle in the 66th minute gave Notre Dame a free kick about 10 yards past the halfway line. Sophomore defender Paddy Burns headed the cross from junior midfielder Ethan O’Brien, sending it past Campuzano.

The goal caused the stadium to erupt and seemingly provide the Fighting Irish with a second wind. Notre Dame continued adding pressure, but Pitt would continue to fight and find opportunities on goal.

The rest of the second half saw an intense back-and-forth between the two squads. However, neither team was able to find a chance to go up in the game. Neither team built up enough pressure to score a go-ahead goal. Regulation time ended with the Panthers and Fighting Irish tied 1-1.

As the first overtime began, the intensity didn’t falter. Close chances came on both ends, as the teams battled for dominance. But after two overtime halves, there was still no winner and the game went to penalty kicks.
Notre Dame took the first kick in the shootout. Senior forward Jack Lynn scored first for the Fighting Irish. Pitt junior Valentin Noel equalized with a goal for Pitt. Notre Dame’s Burns and Pitt’s Feitosa scored the next two, respectively. Notre Dame scored its next, and the Irish goalkeeper made two consecutive, decisive saves against Pitt sophomore Filip Mirkovic and graduate student Alexander Dexter on their ensuing penalty kicks, solidifying their spot in the College Cup semifinals.

Pitt’s season has come to a sour end, with a third straight loss to Notre Dame. It end its season with a final record of 13-6-1.