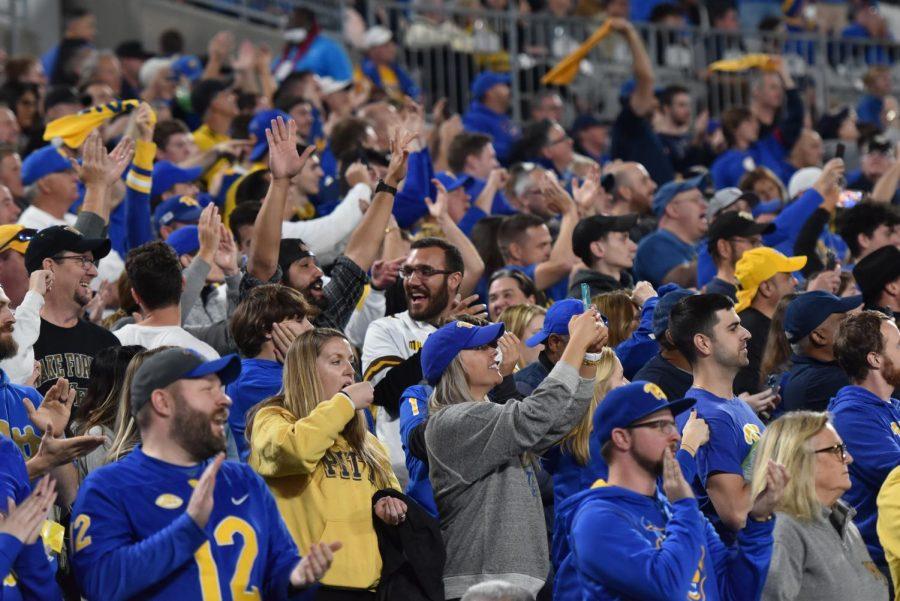 Pitt fans swarmed the Queen City as their No. 17 Panthers took on No. 18 Wake Forest Saturday evening at Bank of America Stadium, all angling to lay their eyes on a team experiencing its most successful season in recent history. Pitt won its first-ever ACC championship, and reached the 10-win threshold for the first time in four decades after a Thanksgiving weekend win versus Syracuse.

Pitt football was crowned the ACC football champion for the first time in its history on Saturday evening. The Panthers took down the Wake Forest Demon Deacons 45-21, behind standout performances from redshirt senior quarterback Kenny Pickett and a no-holds-barred defense.

Stadium officials said 57,856 fans attended Saturday night’s matchup, down from an average of about 70,000 fans who flocked to Charlotte for the previous three championship games.

Stacy Schmitt, an alumnus who graduated in 1975, said it was special to attend the game alongside so many other Panther fans.

“They played their hearts out, the defense came through today,” Schmitt, now a resident of nearby Somerset County who attended the game with his wife, said.

Schmitt added that his favorite play of the game was the last pick-six by redshirt junior safety Erick Hallett Jr.

“Without a doubt,” Schmit said. “That sealed the game right there.”

Don Urbanic, a Pittsburgh native who now lives in Philadelphia, said the win was “fantastic.”

“It was a great victory. Nobody would have predicted a defensive player of the game,” Urbanic, who graduated from Pitt in 1987 and attended the game with his son, said.

Dr. Rich Debski said it was “awesome” to see the Panthers win the championship.

“It’s been awesome because there’s been so many Pitt people down here,” Debski, a Pitt alumnus turned bioengineering professor at the University, said. “We went to Fan Fest Friday and today.”

Debski, who attended the game with his family, added that it was wonderful to see the blue and gold in Charlotte as the Panthers hoisted the trophy on Saturday evening.