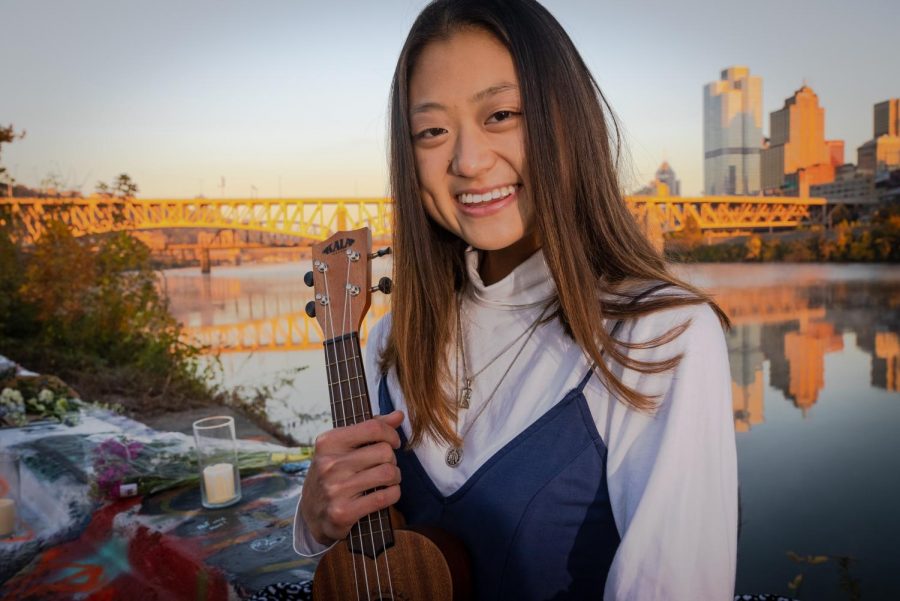 Yunge Xiao, a sophomore statistics and sociology major, sits at Color Park with her ukelele on Nov. 6.

Yunge Xiao, a sophomore statistics and sociology major, began writing songs for fun in third grade and has used songwriting as a creative outlet ever since. An author of more than 55 original songs, she entered 91.3 WYEP’s 2021 Singer-Songwriter Competition last summer and won in September.

Although she had never performed her songs publicly before, Xiao said she found out about the competition during her summer internship with Pittsburghers for Public Transit, a grassroots organization that defends public transportation. One of her fellow interns, Clara Weibel, who regularly listened to WYEP, encouraged her to enter the competition after listening to some of her original songs.

“I’ve always loved songwriting because I love poetry and I love the way that words sound and the dualism within them,” Xiao said. “I figured I would enter the competition because if I didn’t win, nothing bad would happen, which is exactly what I expected.”

The competition was entirely virtual this year for the second year in a row. The radio station streamed each round on YouTube, beginning with 60 competitors and narrowing down to 16 finalists. Xiao submitted her first video in June, in which she sang her song, “Mi Amore.” After she was voted into the finals, she submitted her song, “California Girl,” which ultimately won the competition.

Kyle Smith, WYEP’s music director and judge of the first round of the competition, said Xiao’s song “Mi Amore” stood out to him because of its authenticity.

“There was just something of quality about somebody who had never really performed before 一especially in front of a camera. There was a simplicity to it,” Smith said. “She wasn’t forcing or emulating anybody. It just seemed like she’d written a beautiful song and put some music to it.”

Xiao said while writing a song, she mainly focuses on lyrics and most of her songs are stripped down on the piano.

“I’ve always appreciated when I feel like the person that’s writing a song is singing to me. I love lyrics and I love seeing how people were feeling when they were writing that,” Xiao said. “Both of the songs I submitted actually have a bit of a jazzy infiltration on my normal songwriting, so I thought they’d offer a pretty accurate depiction of where I’m at with songwriting right now.”

Xiao said because of the virtual nature of the competition, the experience felt unreal until she discovered from the radio’s Instagram story that the competition’s audience 一 mostly Pittsburgh locals 一 voted her into the finals in August.

“Because the competition was virtual with COVID and everything, it felt like a scam 一 I really had no expectations for it. And I feel like that’s pretty fitting since that’s how I always approach songwriting,” Xiao said. “I just want to share my songs with people that care about me and that I love, and whatever comes out of it, comes out of it.”

Xiao said because she had so little expectations for the competition, she didn’t tell anyone that she had entered it apart from her girlfriend and Weibel. But as first place winner, Xiao earned $500, the opportunity to record a song at Red Medicine Recording Studio in Downtown, a professional photoshoot, a consultation session with Jeff Betten, the general manager of Misra Records in Pittsburgh, an on-air feature on 91.3 FM and public performance opportunities, according to WYEP’s website.

Weibel, a Squirrel Hill resident and Pitt alumna, said when she initially encouraged Xiao to enter the competition, she wasn’t expecting her to actually do it. She followed Xiao’s journey throughout the rounds, and she was thrilled when she found out she won.

“When she won, that was really validating for me because I knew she was good,” Weibel said. “I think Yunge truly views making music as this sort of de-stressor, she doesn’t see it as having to meet certain standards.”

According to Xiao, since winning the competition, she has learned a lot about Pittsburgh’s vibrant music scene, although she has yet to meet the people working at WYEP in person. She said she looks forward to participating in local open mics as well as possibly putting some of her music on Spotify.

“The community is the reason I love music 一 for the people that like truly appreciate it. I do want to put my music on Spotify and I hope that working with someone that’s more in this industry will allow me to revisit some of my old songs,” Xiao said.

According to Smith, the first winner of WYEP’s Singer-Songwriter competition in 2014, Clinton Clegg, went on to become the lead singer of The Commonheart, a Pittsburgh-based rock band. Smith said one of his favorite parts of working in the competition was seeing what the winners accomplish after the competition.

“I always end up seeing some of these people doing performances in the future, and that’s what it’s all about 一 getting people to participate in and go after their passions,” Smith said.

Xiao said one of the most valuable things she learned from winning the competition is to have self confidence, as she always assumed she was only average at songwriting.

“I feel like I’ve always been a jack of all trades 一 I never really had a basis of where I stood doing these things in comparison to other people,” Xiao said. “I don’t believe in comparing yourself to other people, but if I’ve learned anything, it’s that you need to be confident in yourself, because no one else is going to owe you any confidence.”

Xiao said she believes her success in the competition wouldn’t have happened if she put a lot of pressure on herself to perform well.

“The best part about this was I had no expectations going in and when I have expectations, I tend to talk down on myself a lot and honestly, that probably would have just hindered me,” Xiao said. “This competition made me realize I can do things independently of other people and it can have some good outcomes.”