Food For Thought is a biweekly blog where Kendall Swift reviews restaurants around Pittsburgh. 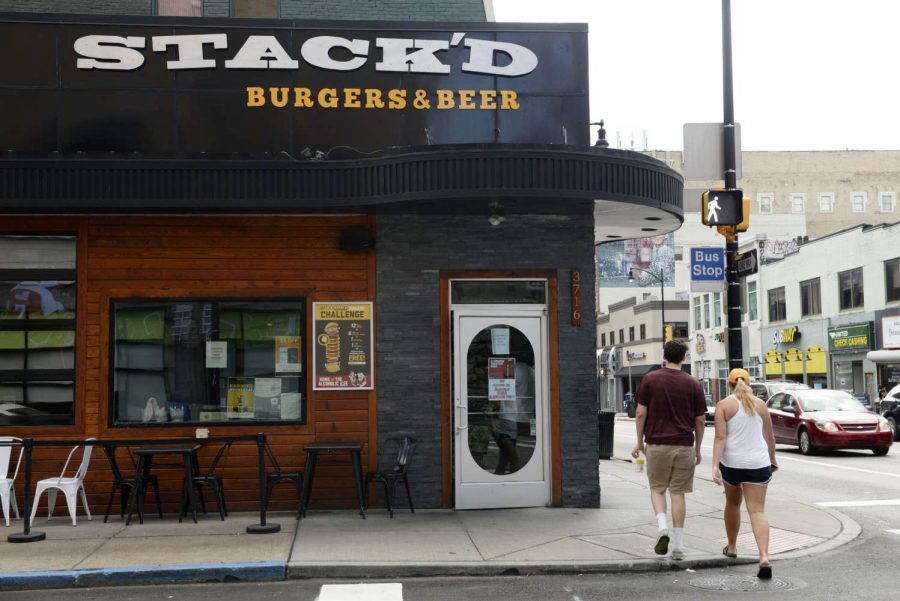 Stack’d on the corner of Forbes and Oakland avenues in Oakland.

You’ve tried Stack’d for their burgers, but what else do they have? I know that most Pitt students have dined at Stack’d, but what about the people who don’t like burgers? So I’ve taken it upon myself to find out for all you burger-haters. Stack’d is a great option for late-night diners because they are open until midnight on weekdays and 1 a.m. on weekends.

To my surprise, Stack’d offers a lot of other options. There is a wide variety of appetizers, quesadillas, chicken wings and more. However, if you are vegan or vegetarian, there are not many possibilities for vegetarian food outside of some meatless options for burgers.

I tried the chicken bacon ranch quesadilla, which is fried chicken, bacon bits, ranch and cheese on a garlic herb tortilla. It comes with salsa and sour cream for dipping — but no sides — and costs a slightly high $10.

The wait was moderate, although that is to be expected considering that it is a busy business in the heart of Oakland. However, the quesadilla came out warm and toasty. The tortilla was nicely toasted and I could see the flecks of herbs on it. Plus, it smelled wonderful. Needless to say, I was very excited to try it.

As I write this, I’m conflicted on how to review it. On one hand, it was certainly good. However, the more I ate, the harder it got to continue. First, the ranch was very rich and creamy. It’s better than most other restaurant ranches, but the creaminess makes the quesadilla as a whole overwhelming. Not to mention, the quesadilla was a little heavy on the ranch.

Next, the quesadilla features fried chicken pieces over grilled chicken, so there was breading on the chicken as well as the tortilla. The bread-on-bread was also a little much.  However, the meal itself seemed very simplistic. It was tasty, but I was left wondering if it would’ve been easier to just make this at home.

The cheese was hard to taste with all of the other flavors working together. But, once in a while when I got a taste of it, it was very good. The bacon bits were crisp to a point that they were hard, although I appreciate that there were plenty of them. The garlic on the tortilla was also overpowering the more I ate. I noticed that all of the strong flavors were constantly fighting to get to the forefront, to the point where the taste was a little overwhelming. At the end, I felt somewhat sick to my stomach, despite not even finishing the quesadilla.

Although I’ve spent a while explaining the quesadilla’s downfalls, it definitely has strengths. The creamy ranch sauce, which I’ve previously mentioned as a flaw, is actually one of its greatest qualities. It was zesty, rich and delicious. The chicken was also very good and about what you’d expect from chicken tenders. The tortilla was something I’d never tried before, but the garlic herb flavor made it stand out compared to other quesadillas I’ve eaten. After all, it’s chicken, cheese and bacon grilled on a tortilla, so it obviously tastes good.

As I’ve said before, the dish came with salsa and sour cream. To have the full experience, I dipped into both. The sour cream was not particularly special, so I don’t have anything to add about its flavor. When I dipped into it, I wasn’t a fan of the sour cream mixed with the ranch. It wasn’t bad, per se, but the cream-on-cream has the same problems I’ve mentioned earlier. It was simply too dense.

The salsa, though, I loved. It was your classic restaurant-style salsa, similar to what you’d expect from a restaurant such as Chili’s. The freshness of the tomato added to the quesadilla and cut through the denseness that was the dish by itself. The salsa was served in a tiny cup, though. I wish there was more of it.

My afterthoughts of the meal are mainly the price. The quesadilla cost $10, but came with no sides. For that price, I wish something else came with it, especially considering that their burgers start at $8.30 — although most are noticeably more than that. For some reason, I can’t envision a quesadilla costing more than a burger. This made me think of one of their competitors, Burgatory, where burgers start at $10.50 and come with chips.

Personally, I’ll always be a Burgatory girl, but I must admit that the Stack’d quesadilla is great for both taste and proximity to campus. I think it is a great option if you decide you’re not in the mood for a burger, even though it is not perfect.

Kendall writes about food and restaurants. You can reach her at [email protected]