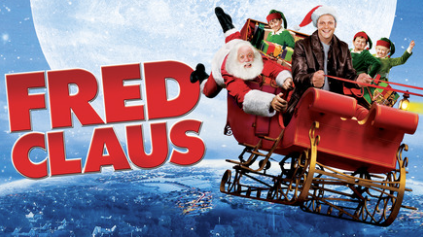 “Fred Claus” is one of The Pitt News staff picks for holiday movies.

I keep repeating to myself “two more weeks, two more weeks and we can all get on our respective bus, plane or friend’s car headed for home.”

There’s no doubt that we’re all struggling waiting for the semester to end, but when you have a break, why not watch a holiday movie? They’re fun, they’re romantic and sometimes they’re even scarier than the extended family you’ll have to see over break. Either way, here’s to hoping one of these movies will provide a stress-free few hours for you.

I, for one, will not turn down a Vince Vaughn movie. There’s not a comedic movie of his that won’t have you laughing and grinning wide for two hours or so. Lucky for us, Vaughn’s comedic chops extend to the holiday season. “Fred Claus” is an early 2000s Christmas classic for me. I can remember seeing the giant cardboard cutout movie advertisements in my local theater, and while I enjoyed the movie when I was young, I appreciate it even more now as an adult.

Vaughn plays the titular Fred Claus, the jaded older brother of Santa Claus, or “Nick,” played by Paul Giamatti. Fred is the black sheep of the family, who has long been jealous, growing up in the shadow of his younger brother’s fame. When he’s in need of some money, Fred goes to the North Pole to work for his brother. While he’s there he manages to instigate a raunchy concert for Nick’s uptight elves, derail the present-making process and almost ruin Christmas. But Fred isn’t doing all of these things intentionally — the North Pole has become overworked and Nick is overrun with his job. And though the movie is a comedy, and there are plenty of laughs to be had, it’s really about finding family again during Christmas when you thought they were long lost to you.

If the unending compilation of families and friends in Heathrow Airport hugging each other while Hugh Grant’s voice reflects on how, “love actually is all around,” doesn’t melt the coldest of hearts, perhaps nothing will. An essential must-see to celebrate Christmas and the holiday feels, “Love Actually” follows five different budding romances, their highs and lows, and the unknown connections between each of them.

From the sight of the UK’s Prime Minister (Hugh Grant), dancing alone to the Pointer Sisters in his lavish mansion, to Jamie (Colin Firth) proposing to his Polish crush Aruelia in her native language (I mean come on, doesn’t everyone deserve a lover who will literally learn a whole language to propose?), and even the somewhat soul-crushing but incredibly empowering scene when Karen (Emma Thompson) confronts her cheating husband Harry (Alan Rickman), there’s something to love about every minute of this film. In the end, all the romance, humor, love, loss and peace serves as a great reminder to make sure everyone in your life knows you love them dearly — colorful Christmas lights in the background optional. Just don’t ever forget that love actually is all around, this time of year and always.

At the core of the holiday season are all of those magical and unforgettable memories we experienced during childhood, which somehow never cease to resurface every December. For me, “A Christmas Story” perfectly encompasses that idea, making it the quintessential Christmas film. Despite being released in 1983, it feels like a tried and true timeless classic, with a main ensemble that has such a natural dynamic they almost seem like an authentic family.

The plot of the film unfolds through the narration of the protagonist, now an adult, as he fondly looks back on Christmas when he was nine years old. The young Ralphie Parker (Peter Billingsley) fantasizes about getting a Red Ryder Carbine Action 200-shot Range Model air rifle — yes, I typed out the entire name — which, to him, is the key to becoming the hero he sees in his wild imagination.

The Parkers may appear to be the “perfect” representation of 1930s/40s Americana, but it’s their dysfunctional interactions and characteristic quirks that make them so lovable — and add to the film’s sharp wit. With a chuckle, I think of Ralphie’s overprotective mother (Melinda Dillon) feverishly bundling up his little brother (Ian Petrella) in layers upon layers of puffy coats. This moment, like so many others in the film, represents the humorous tales of holiday seasons past that we exchange with our families every Christmas, like cherished gems.

A not-so-traditional take on the holiday season, “Krampus” follows one unhappy family as they attempt to navigate the holidays, albeit dysfunctionally.

When young Max (Emjay Anthony) rips up his Christmas list and throws it into the cold winter night, he triggers the ancient evil counterpart of Saint Nick, Krampus, to subsequently terrorize and kidnap his family over the course of the holiday. As the family attempts to escape Krampus and his evil minions, they learn an important lesson — that no matter how dysfunctional and difficult your family can be, in the end, family is what matters the most.

The film does not exactly make you feel warm and cozy, as it’s filled with startling jumpscares, and terrifying creatures that won’t exactly leave you in a jolly holiday spirit. But the movie is also filled with plenty of comedic relief and several hilarious yet endearingly familiar characters.

All in all, “Krampus” is an unusual holiday flick that certainly stands out amongst the Hallmark movies and corny Christmas rom-coms usually queued up this time of year.

“Anna and the Apocalypse” is your classic coming-of-age holiday movie about Anna Shepherd (Ella Hunt) who wants to go abroad after finishing high school, much to her father’s distaste. Along the way, she and her friends learn the importance of community, family, teamwork and self-sacrifice as they all come together during the Christmas season. Also, there are zombies. And it’s a musical.

Ok so maybe it’s not exactly the type of film you’d watch with your family around the fireplace, but “Anna and the Apocalypse” is still a very fun watch. Alex Billington described it as “Shaun of the Dead” meets “La La Land” which is honestly a better description for the movie than I could ever give. Like every good zombie movie, it’s got a large cast of characters that you want to make it out, though not all of them do, and the songs themselves are pretty good. If you want some more non-traditional Christmas fare this year, then you should definitely give this film a watch.