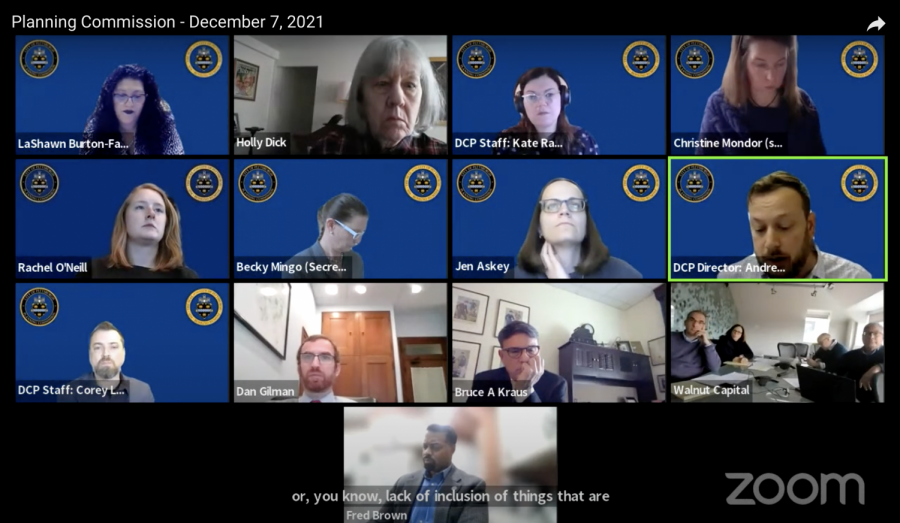 The commission held its bi-weekly meeting Tuesday, and discussed local developer Walnut Capital’s plan to rezone and redevelop parts of Oakland. The commission spent more than two hours discussing details of the plan with the developer — which includes plans to rezone parts of Central Oakland to make way for a grocery store, high density “walk to work” housing and a pedestrian bridge across the Boulevard of the Allies, among other changes.

Andrew Dash, director of the Department of City Planning, opened the meeting by sharing several concerns about the plan from his department and the Oakland community. Dash said some of the primary concerns include confusion about the definition of “walk to work” housing, lack of specific affordable housing mechanisms, lack of community input similar to the Oakland Plan — an ongoing City-led initiative to re-envision the neighborhood — and the lack of City Planning involvement in the plan.

Dash said while some aspects of Oakland Crossings coincide with the Oakland Plan, such as the proposed grocery store and more open spaces, Walnut Capital’s exclusion of City Planning in the drafting process raises administrative and policy concerns, such as how the department could adopt a plan it was never involved in.

Dan Gilman, chief of staff to Mayor Bill Peduto, said he, Peduto and community members have discussed changes to the Oakland neighborhood for more than a decade. Gilman said he and Peduto saw “an opportunity” to work with a private developer and institutions on the plan. He spoke in favor of Walnut Capital’s plan and zoning code changes, and said progress in Oakland “can’t wait.”

“We want to put a basis on the table that allows us to have this conversation before it’s too late and we lose out on an incredible opportunity,” Gilman said.

Several representatives from Walnut Capital, including President Todd Reidbord and lawyer Jonathan Kamin, presented the plan and the proposed zoning legislation changes to the commission. The presentation covered the existing condition of property and land use in Oakland, accelerating community goals, development timeline and phasing and a section on the proposed zoning legislation.

Kamin said the proposed changes to the City’s zoning code would permit mixed use and higher density development in the desired area in Oakland, such as McKee Place, Halket Street, Louisa Street and the Boulevard of the Allies.

Commissioner Sabina Deitrick said Walnut Capital’s proposal is “disappointing,” and she’s “befuddled” with how the mayor “sidestepped” his own planning department. Deitrick said the plan does not prioritize racial diversity in Oakland or community input.

“I know you don’t want to hear about process, but that’s a big chunk of what planning is,” Deitrick said. “Coming in with a zoning change from a developer who’s been working with a team internally sounds like it’s old-timey planning long before we had a citizens’ ladder, citizen participation.”

Kamin said Walnut Capital has committed itself to community involvement in the Oakland Crossings plan through 40 meetings, public outreach, meeting with the People’s Oakland neighborhood group and more.

“Part of the process discussion is, I think, is a little bit of a narrative that doesn’t actually respect the work that has been done and the time that has been put in on this,” Kamin said.

Commissioner Fred Brown questioned if the 40 meetings Walnut Capital has said it attended with community members are the same as forming meaningful partnerships with the community in the way that neighborhood plans are supposed to do. Brown also asked how Walnut Capital specifically considered equity and inclusion in the planning process.

“I just want to lay back and say, I need you to understand that you are one developer of many developers that we see every other week, and we have to represent the community’s interests every time,” Brown said. “And so I would just ask that we all consider that. And then lastly, I would just say that Pittsburgh is changing, and in some of the communities that I represent, see it getting whiter. So any new development that doesn’t take into account intentionally an equity and inclusion and diversity framework, is a suspect and concern.”

Kamin responded and said the “walk to work” concept values employees by allowing them better access to their workplaces. Reidbord said Walnut Capital hopes to attract a diverse population through the Oakland Crossings plan.

Despite criticism from the commission, Reidbord said the plan does include enough information since Pittsburgh City Council passed the amended legislation onto the Planning Committee in the first place.

City Council voted 8-0 at an Oct. 19 public hearing to send the legislation, with amendments, to the City Planning Commission for a hearing and recommendation. Amendments to the legislation included requiring new multi-family housing in the rezoned area to include at least 10% walk-to-work housing, where rent will not exceed 30% of the tenant’s gross income and limiting the heights of developed buildings to a maximum of 60 to 90 feet without bonuses for LEED certification and 108 to 160 feet with bonuses.

About 25 Oakland residents and Pittsburgh community members spoke out against the developer’s proposal at a City Council hearing on Oct. 5. Community members argued that Walnut Capital did not seek proper community input while formulating its plan — invalidating work that community members already put into creating the Oakland Plan.

The Oakland Planning and Development Corp., a registered community organization for Oakland, has strongly opposed the proposal since its introduction. According to a Sept. 14 statement, the Oakland Crossings project would remove several blocks of homes and apartments. OPDC leaders argue that the proposal also ignores the ongoing process to shape the Oakland Plan, which already sought community input about neighborhood priorities.

Christine Mondor, the commission’s chair, questioned why the council would want to set the “precedent” that zoning changes do not have to include the involvement of key City departments.

“I think that the council should think about that as a process, so while it might benefit Councilman [Bruce] Kraus and his district and he might want it, the fact that this can in fact circumvent the way neighborhood plans are created and the way zoning is approved, sets a precedent,” Mondor said. “So, if council wants to set that precedent, so be it, but this is highly unusual.”

Kraus, who represents part of Oakland, said the council utilized a March 2021 letter to potential Oakland developers from the Oakland Plan’s steering committee as a template for the amendments to the legislation. The letter included 10 requirements for meaningful development in Oakland.

Kraus said amendments made regarding housing and displacement, open quarters, efficient buildings and bonuses and buildings constructed in context with the neighborhood coincide with goals outlined by the steering committee.

“As we combed through the legislation, and focused on the amendments we wished to see, we made sure that each amendment that we made referred back to one of the goals that was stated in the Oakland Plan Steering Committee letter,” Kraus said.

Deitrick, who also works as an assistant professor in Pitt’s Graduate School of Public and International Affairs, also asked Walnut Capital to be more transparent about its involvement with Pitt in the redevelopment of parts of Oakland. Reidbord said Pitt has released statements on its partnership with Walnut Capital to redevelop the former Quality Inn Suites on the Boulevard of the Allies.

Pitt is currently involved with Walnut Capital with a few projects in Oakland, including the redevelopment of University property at 3401 Boulevard of the Allies. The University proposed bringing a grocery store and residential housing units to the property, which currently houses a Panera Bread and a former Quality Inn and Suites. Walnut Capital is also partnering with the University for the redevelopment of a series of now-demolished rowhouses, bounded by Bates Street, Boulevard of the Allies and Zulema Street. It is currently unknown what will take the place of the Bates row house site.

“Because that kind of sorting out that you’re describing, that is exactly what the neighborhood [Oakland] plan is supposed to do — give us zoning recommendations that would in fact support the case you’re making,” Mondor said. “Why is this coming ahead of the neighborhood plan?”

Mondor said while other development doesn’t stop even with the Oakland Plan in progress, it is “unusual” for the commission to consider zoning legislation created by a private developer. Mondor also outlined the criteria the zoning proposal must meet to be approved, which states that the proposal must be consistent with the plans and policies of the City, take into consideration the convenience and welfare of the public, not be detrimental to neighboring properties, be compatible with the zoning uses and character of the neighborhood and more.

Commissioner Becky Mingo echoed Mondor’s sentiment about the “unusual” way the zoning proposal came to the commission through City Council. Mingo said later in the meeting that what she described as a lack of specific information within the plan is frustrating.

“It’s like I’m trying to help out this whole process with blindfolds, and not enough information,” Mingo said. “It’s unbelievably frustrating.”

Mingo also highlighted that the City zoning code applies to all of Pittsburgh, and changes should not be made specifically for one development project in one neighborhood.

“But we’re writing this text for the City, not for your particular development,” Mingo said. “So it makes me nervous to say, ‘Oh, we can have 10 parking garages and rent them to whomever we want to on the street,’ there’s no limit to that.”

Kamin said Walnut Capital’s plans will ultimately be beneficial for Oakland residents and have many aspects in line with the Oakland Plan.

“Nobody is getting left behind, nobody’s getting put in a position that isn’t beneficial to them,” Kamin said. “In fact, we think, on the contrary, this is actually going to help all of central Oakland and ultimately will help inform the Oakland Plan to make sure there’s consistency with those uses.”

Mondor also said it is “extremely difficult” for the Commission to consider Walnut Capital’s proposal without specific details as to how the plan connects to existing progress from the Oakland Plan.

“This is the commission flying blind without ever having seen the neighborhood plan,” Mondor said.

The commission will meet on Jan. 11 for a formal hearing to vote to approve or disapprove of changes to the City’s zoning legislation.

Frank worked as a sustainability and resilience intern for the Department of City Planning, which included work related to the Oakland Plan.