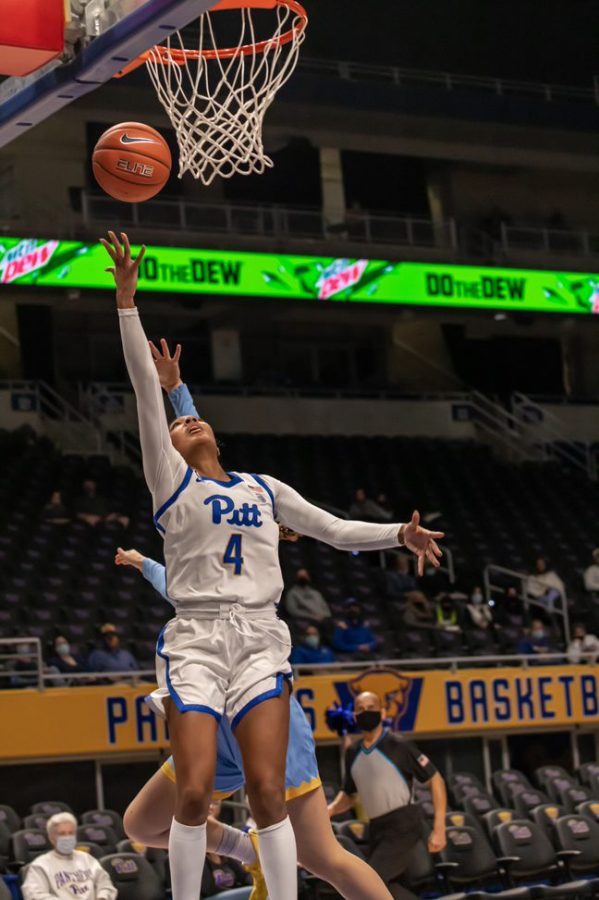 Emy Hayford (4) scores during the Pitt women’s basketball game against LIU on Nov. 17.

Pitt women’s basketball continued its hot start to the 2021-22 campaign with a commanding, 67-51 victory over Coppin State at the Petersen Events Center on Tuesday night. With this victory, the Panthers improved to 8-2, the best start to a season since 2009-10.

Both teams started slow, scoring nine points each in the first quarter. The Eagles rattled off 26 shots in the first period, but made just 18.8% of their attempts from the field.

The Panthers did not fare much better on offense either. They turned the ball more than six times in the first quarter alone, limiting their offensive opportunities.

Each team failed to get a true upperhand in the first half. Coppin State redshirt junior guard Aliyah Lawson drilled a trio of 3-pointers to keep the Eagles within striking distance early. But the Panthers eventually battled to earn a narrow 26-24 first half lead.

Pitt head coach Lance White was frustrated with the Panthers’ poor execution in the first half.

“I thought the first half was about as bad as we played all year,” White said. “We couldn’t find that rhythm to play fast. We play fast and whenever you don’t it stalls everything.”

The Eagles continued to hang with Pitt at the beginning of the second half, but the Panthers caught fire midway through the third quarter. They created some separation by scoring 23 points, while holding Coppin State to 19 in the period. White said postgame that limiting turnovers was key to turning things around in the second half.

“I thought in the second half, limiting our turnovers to three was a huge step,” White said. “We were getting to the free-throw line, [and] we were much more aggressive and attacking than we were in the first half.”

Junior forward Amber Brown led the Panthers strong third quarter performance with nine points in the period. Brown said she wanted to change up the tempo after the Panthers’ slow start and that faster play helped spark her team.

“We kinda had a down moment, and I like to play fast,” Brown said. “So I’m like something has to change, so I got to just change the tempo.”

Sophomore forward Liatu King said Brown’s scoring changed the outlook of the game for the Panthers.

“When [Brown] started running, she had endless baskets back-to-back,” King said. “When she wasn’t getting the ball, she was bringing the defender, [which] opened up the floor that gave us easier shots.”

King herself had a dominant second half controlling the glass. She racked up nine rebounds in the final two quarters and ended up pacing Pitt with a total of 15 rebounds.

Junior forward Rita Igbokwe capped off the Panthers’ dominant third quarter with two blocked shots late in the period. Igbokwe racked up five blocks in the game, accounting for half of the Panther’s total deflections.

Pitt finished the game with a strong defensive fourth quarter, allowing Coppin State to score just eight points. With the game on the line, the Eagles lackluster shooting from the field — 2-14 in the final quarter — doomed them. Coppin State couldn’t put enough points on the board to mount a comeback.

Pitt also relied heavily on points from the bench on Tuesday night. White used seven Panthers off of the bench and all four reserves who played more than 10 minutes scored. The Pitt bench scored 18 points compared to just six from the Coppin State bench. White said the Panthers’ offensive versatility was helpful on Tuesday night, but that moving forward he wants to have a more consistent idea of what each player brings game in and game out.

“I think our ability to play a lot of people has helped us,” White said. “But it also hurt us in a lot of ways, because we need to find that continuity and consistency of what each player brings.”

The win over Coppin State was Pitt’s last tune-up before a showdown with No. 2 NC State on Friday. White hopes this game prepared the Panthers for the highly ranked Wolfpack.

“Hopefully now we’ll be ready,” White said. “It’ll be a great test to go against an ACC opponent and see where we are at.”

The Panthers and Wolfpack will square off at the Petersen Events Center on Friday night. Tipoff is scheduled for 6 p.m. and the game will air on the ACC Network.