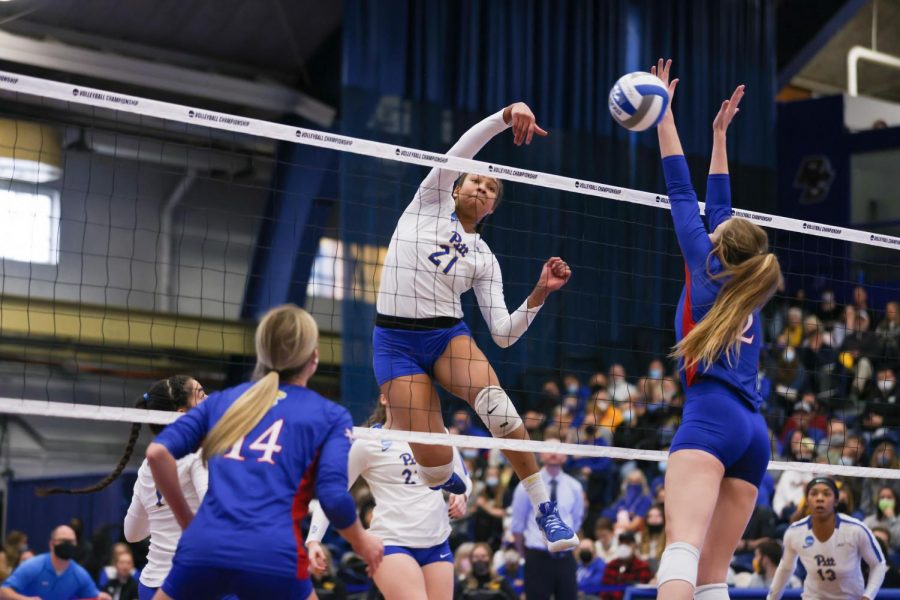 Both teams went into the tournament unranked but found their stride — rattling off upsets in the first two rounds to make surprise regional tournament appearances.

According to Pitt senior right-side hitter Chinaza Ndee, being a favorite instead of the underdog this year didn’t change the approach the Panthers bring to every tournament game.

“There’s always added confidence with getting a higher seed,” Ndee said. “I think we try to play with an underdog mentality and kind of play with a chip on our shoulder, and I think that helps us a little more than just being overconfident.”

While the Panthers run ended in the Elite Eight after a shock upset against No. 3 Minnesota in the third round last year, the Jayhawks finally met their match on Thursday afternoon in the Sweet 16 against none other than the Panthers, who this time bore the No. 3 national ranking. Pitt ended the Jayhawks upset bid in just three sets at the Fitzgerald Field House, completing the sweep and moving on to its second consecutive Elite Eight appearance.

The Jayhawks defense proved stellar early, holding the Panthers to a -.100 hitting percentage in the game’s first eight points and simultaneously jumping out to a commanding 6-2 lead. After calling a quick timeout, the Panthers finally started to find their big hitters, using a 3-0 run out of the break to get right back into the set.

Graduate student outside hitter Kayla Lund led the charge with a kill and back-to-back aces to knot the set up at 11. The Panthers then took complete control of the game, using a 10-0 run to take a commanding 17-11 lead.

Head coach Dan Fisher said his team came out with too much energy, and made some little mistakes that he attributed to overexcitement.

“We were a little too juiced, and we need to improve on that,” Fisher said. “We were just making a lot of attacking errors, and I think we had a service error too so we just gave them a lot of easy points.”

Behind solid performances from Ndee and senior outside hitter Leketor Member-Meneh, who ended the first set with seven and five kills respectively, the Panthers never relinquished their lead and took the first frame 25-19.

Kansas used the block to go up 6-3 early in the second frame, notching seven to that point in contrast to Pitt’s one. The Panthers used a pair of three-point runs to take a slight advantage over the Jayhawks. Up 14-12, the “Fab Four” of Lund, Ndee, Member-Meneh and senior middle blocker Serena Gray paced the Panther attack with two kills apiece.

Another three-point run put the Panthers up 22-16 late in the second set. After a much-needed timeout, the Jayhawks went on a remarkable four-point run to force the Panthers to call a timeout of their own and bring the game back to just two points. But it was Pitt who closed out the set with a win. A Member-Meneh kill and Gray block won the second set, 25-21, and clinched a commanding 2-0 lead in the match.

In the third set, Pitt got off to a fast start, jumping out to a 4-1 lead. But the run was short lived as the Jayhawks pulled back to within one, showing some fight early in the frame.

Both sides were even early in the frame, but it was all Pitt after the score was knotted at seven. The Panthers immediately broke the tie with a three-point run and held a lead of four or more points for the duration of the contest.

A late, four-point push gave Kansas some life, but by then it was too little too late.The Panthers ended the Jayhawks Cinderella tournament run in a sweep by taking the third and final set 25-18. An ace from sophomore outside hitter Valeria Vazquez Gomez that just barely squeaked over the net sealed the victory for the Panthers and pushed them into the fourth round for the second year in a row.

In just her first year at Pitt, Member-Meneh said Pitt’s tournament run has already exceeded her expectations and that the team is just enjoying the ride.

The Panthers looked like the stronger team in almost every aspect of Thursday’s matchup. They boasted a .356 hitting percentage for the game along with nine aces, while comfortably taking all three sets by four or more points.