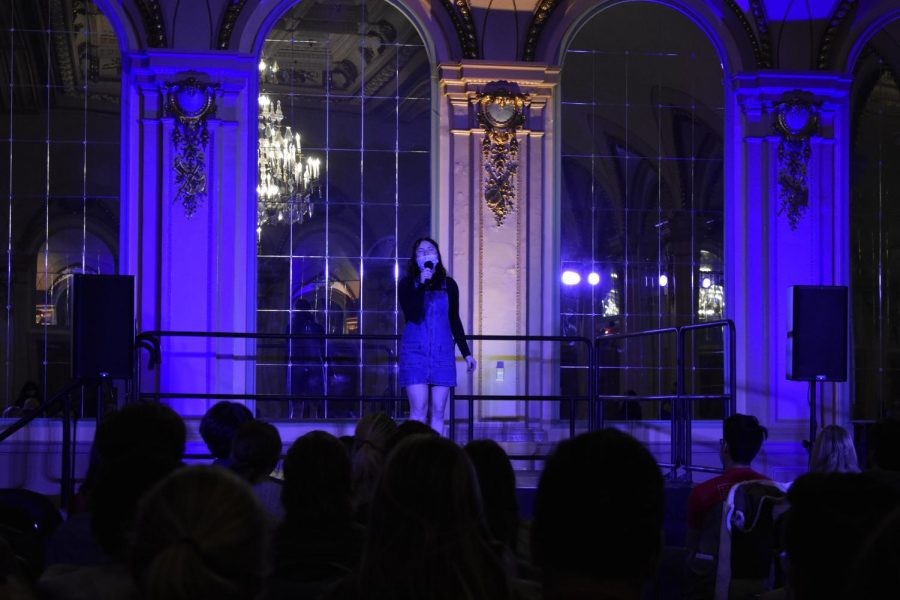 Katie Gibson sings “Dead Mom” from the musical “Beetlejuice” at the Broadway Coffeehouse hosted by the Pitt Musical Theater Club and Pitt Program Council in the William Pitt Union on Wednesday evening.

By Thomas Schmidt, For The Pitt News

A man takes the stage as he sings in baritone in a rendition of “If I Ever Were To Leave You,” the voice echoing off of the room’s walls and encompassing the audience members.

Josh Rosen and Valerie Davis hosted the event, and walked up after each performance to give some information about the performers and introduce the next song. They are both Pitt students who host their podcast “Broadway Vibes Only” where they talk about their favorite numbers.

The event was put together with the cooperation of Emaya Anand, PPC’s travel director, and Lauren Taylor, department liaison for the Musical Theater Club.

Anand said she and the other PPC members were very excited to host events like this for students after a year of being online.

“I think the whole student body really misses performances and I wanted to celebrate the culture of Broadway,” Anand said.

Nicolas Jones, PPC’s public relations director, said the most exciting part of the performances was being back in person, and he was excited to see the Pitt community finding a way to help the community relax.

“Just being back in person with the Pitt community, and having an event where the Pitt community can come together and really experience an event that highlights the amazing talent that students have,” Jones said. “While also being able to relax in an environment that is often stressful, especially with finals.”

According to Anand, the event was made to give a way for everyone to relax and offer a cozy atmosphere.

“The whole point is it shouldn’t feel like everything is forced, the audience can walk in and enjoy performances, the lighting is going to be dark, it’s going to be in the ballroom, so it’s a very enclosed space,” Anand said. “We’re trying to bring Broadway to Pittsburgh.”

Ryan Scholl, a junior student political science major, said he has been to a few of the Musical Theatre Club’s previous shows and that he thinks attending these events is a good way to remove himself from all the stress of finals.

“I learned about the event through my fraternity and I’ve been to a few shows before, I think it’s a nice escape from finals and a way to relieve stress, to just have a laugh and enjoy the performances,” Scholl said.

Patrick Francis, a first-year political science major who performed “If I Ever Were To Leave You” from the musical Camelot, said after the event that he was nervous before performing.

“I don’t know if it was visible for the audience, but I was shaking a little bit as I got on the stage,” Francis said. “I like to make a little joke before each performance to calm the nerves.”

Francis said the song and the musical meant a lot to him, because of its romantic undertones.

“I’m kind of a romantic, I just love the sweeter ballads, what I’m drawn to most is something that I can feel,” Francis said.

According to Francis, the numbers were a good way of expressing these feelings of love, passion and nostalgia to the audience. He said for most performers, the songs they pick have a lot of emotional connotations to them.

“When I was a kid, my mom would play the CD, and when I was like six I would put it in the CD player and pretend I was Lancelot running around with the little sword,” Francis said.

After the show, people walked by and congratulated Francis on his performance. They told him they thought he was an amazing performer. His friend group joked that he shouldn’t let himself get too much of an ego from all the compliments.

Francis, who was overwhelmed by the praise, also said performing in this cabaret-esque helped him de-stress while he was dealing with finals and the stress of his job.

“I generally want to and try to not work after 5:30 if I can help it, so kind of having a little bit of a night off to hear other people sing was kind of nice,” Francis said.

According to Francis, the feeling, the atmosphere, and the community was very friendly, as each performer put in all their effort to sing some of the most meaningful songs to them. The audience happily supported them throughout the entire event.

Jones said he felt that the event was a way for everyone to get together to relieve some stress from finals and support the art in our community.