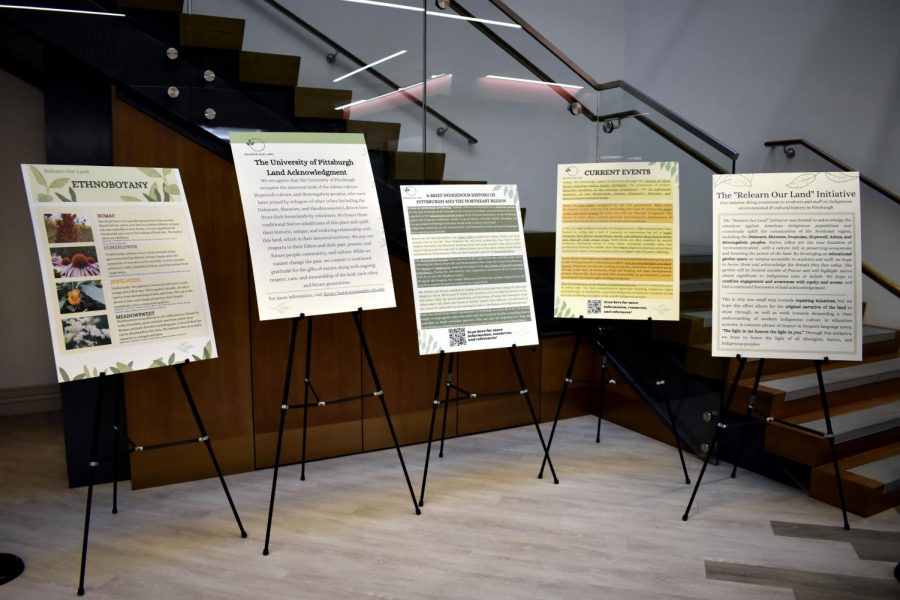 A community learning session on the “Relearn Our Land” Initiative in Posvar’s Global Hub last Monday.

The winter season may have just started, but for those who are already craving the spring blooms, there is a hint of light coming up. Pitt’s Green Fund and the Office of Equity, Diversity and Inclusion have partnered together to bring the “Relearn Our Land” initiative to campus.

Posvar’s Global Hub held a community learning session for students to stop by and hear more information about the initiative last Monday. The session focused on student’s research on the Indigenous history of the Pittsburgh area and how students can get involved in the upcoming garden project.

A group of students enrolled in a sustainability course at Pitt created the “Relearn our Land” project, which is funded by the Green Fund. The project is led by Pitt students who are all environmental studies majors — sophomores Juliana Hunt and Allyson Frantz, along with junior Meghan Hammer.

Frantz said their goal is to educate students and the broader Pitt community about Indigenous cultures and history, such as their religious and medicinal practices, with roots in the Pittsburgh area.

“We found out we all have a common interest in environmental justice and I had brought up the idea of creating some sort of garden area focused on Indigenous culture and history in this area, and the project spurred from there,” Frantz said.

The group stressed that while they hope the garden space can be a place for students to come and honor the land as well as find peace, the project is not an attempt to speak for people with Indigenous backgrounds or identities.

“We also think it’s important to make it clear that none of us have Native American heritage and we don’t claim to speak in the place of any of those with Indigenous backgrounds,” Hunt said. “We’re really just hoping to act as a link between Pitt’s campus and local Indigenous groups.”

According to Rachel Vertucci, a junior supply chain and global management major and Green Fund Allocation Board director, the Green Fund was able to meet with the Relearn Our Land group and provide funding for their project.

“Professor Ward Allebach encourages his student groups to apply to the Green Fund for funding once they have an idea for a sustainable initiative,” Vertucci said. “Relearn Our Land applied for funding late October, and we were able to meet with the group and vote to fund their poster boards made of recycled materials.”

The Green Fund is also encouraging the group to reapply for funding when they develop plans to have an Indigenous plant garden in the future as a separate project.

Vertucci said the initiative will feature both medicinal and decorative plants, which will hopefully also be included in a garden and have historical significance.

Pitt students are encouraged to get involved in the Green Fund, either by running for the board, applying for Green Fund led internships or applying for funding for their own sustainability project.

Ron Idoko, OEDI’s diversity and multicultural program manager, said students have the power to create and promote change on campus, like the garden, without the need for faculty or administrative support.

“Students are more than capable themselves,” Idoko said. “A project like this, which is student led and student run, is what the OEDI is always trying to create platforms for and uplifting these projects.

He noted the challenge this project is founded upon, which is creating something that represents an underrepresented culture while also being sustainable, all while preserving the original history.

“Some of the Indigenous eco-practices that have been lost over time are reflected in this initiative,” Idoko said. “One of the things that we’re still working on is to really understand the history of the Indigenous and Aboriginal communities from this area.”

According to Idoko, OEDI is always working to support student efforts to create a campus that fosters diversity. He said he hopes that Pitt students will become more aware of their powerful ability to be that change.

“We want students to know that they have the capacity to advance change in this area,” Idoko said. “Whether it’s through their academic studies, co-curricular programming or engagement, that there are so many opportunities to really foster a very diverse and multicultural campus environment.”

Hunt said she hopes the project has a lasting effect on the Pitt community, even after they leave Pitt.

“We hope this initiative continues even past the point when we are here,” Hunt said. “We want the conversation to last on campus and get people thinking more about bringing awareness to underrepresented cultures.”