Opinion | Texting is a language of its own 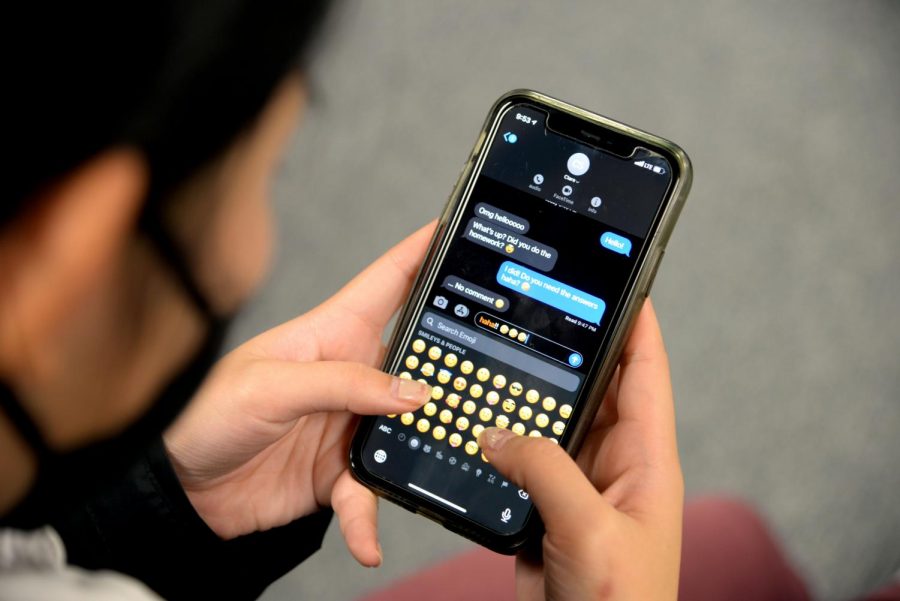 A Pitt student texts about homework at the William Pitt Union on Sunday evening.

By Anita Bengert, For The Pitt News

The rise of texting in the 21st century has come crashing down like a meteor on the “dinosaurs” who grew up on telegraphs not too long ago. While there are standard linguistic rules for writing and speaking, texting merges the two together, breaking off as a new branch of language. While “text dictionaries” exist and how-to guides can get you to partial fluency, certain rules of texting go unspoken.

Like a game of “telephone,” this network of virtual whispering has evolved into its own modernized form of communication. Newer generations are shredding the rules of prestigious elites and disproving the necessity of standard linguistics. In turn, this advocates for more liberty in writing and will go down as one of the most revolutionary impacts on language in human history.

In texting, punctuation and capitalization play a crucial role as virtual body language. This new trend has set a surge of teenagers deactivating the auto-capitalization function in their settings in an attempt to sound more lax in conversation. Texting too formally conveys a serious tone, while excessively using punctuation and letters lightens the mood. For example, “thank you!!!” or “heyyy” read differently than simply, “hey.” These subtle nuances of texting give more dimension to communicating the feelings behind our words.

Punctuation used alone also carries a whole new meaning. A question mark by itself is hinting at the person to explain more, an exclamation point alone indicates shock or excitement and carets are used to agree with previous messages. Punctuation is not the only way that text slang has progressed into its own dialect.

More often than not, no words say plenty. “Dry texting” is a new word used to describe a person sending boring or one-word responses. Ellipsis used alone in texting connotes the combination of both pausing and awkwardness — creating the perfect passive aggressive text or humorous response. Silence in texting almost communicates more than it would IRL — in real life.

Emojis and GIFs are used to better describe feelings or represent objects. iPhone’s digital touch and iMessage games are essentially virtual flirting without having to text a single word. Breaking these limitations in linguistics through texting is extending the boundaries of what can be written and said.

Texting affects speech as much as it does writing, introducing new vocabulary like saying “left me on read” to describe being ignored. Online abbreviations such as “IRL,” “BRB,” “OMG” and “LMAO” are spoken out loud — translating regular phrases quicker to the ear. The linguistic liberty that texting phrases provide are seeping into our everyday conversations — proof of the power and convenience of this new language.

Digital and in-person conversations are much more vibrant as a result of texting, as people can express a greater number of emotions in fewer words — captivating listeners who have shorter attention spans. Phone calls and emails are outdated and appear unnecessary since sending a quick text saves time and feels more casual.

Some may still remember how dawdling it used to be to press the #5 on your keyboard a hundred times just to spell out “LOL,” but in spite of new features improving efficiency, the speed of communication still manages to lag behind. Texting has an extra layer of social pressure to conversations, perhaps a cost of increased linguistic freedom.

With notifications on, batteries charged and screen time flying off the charts, savvy texters still play it cool taking their sweet time to respond. Those who reply too quickly are exposing the amount of time they spend on their phones or the clinginess it may portray. Read receipts offer the option to let the other party know they’ve seen the message, but most users mask their true availability by turning it off. Fear of looking desperate has defied the functionality of today’s phones, ironically causing the instant in instant messaging to be obsolete.

Generation Z may have stepped blindly into this world as the first generation immersed in modern communication, but has taken on that role to pioneer new terms and trends that have dominated most of today’s media. Informal literacy is emerging and allows a new era of writers to explore their creative style. As new generations constantly advance language and quickly adapt to this technological brave new world, they are establishing a free space to express themselves while being understood.

I can imagine the future of writing, or — w r i t i n g — as a platform where I can convey my thoughts and feelings eloquently in any format or style.

Anita Bengert writes primarily about her perspective of 21st century America, the influence of social media, and the humor behind societal flaws.