Pitt overpowered by No. 2 NC State in ACC opener 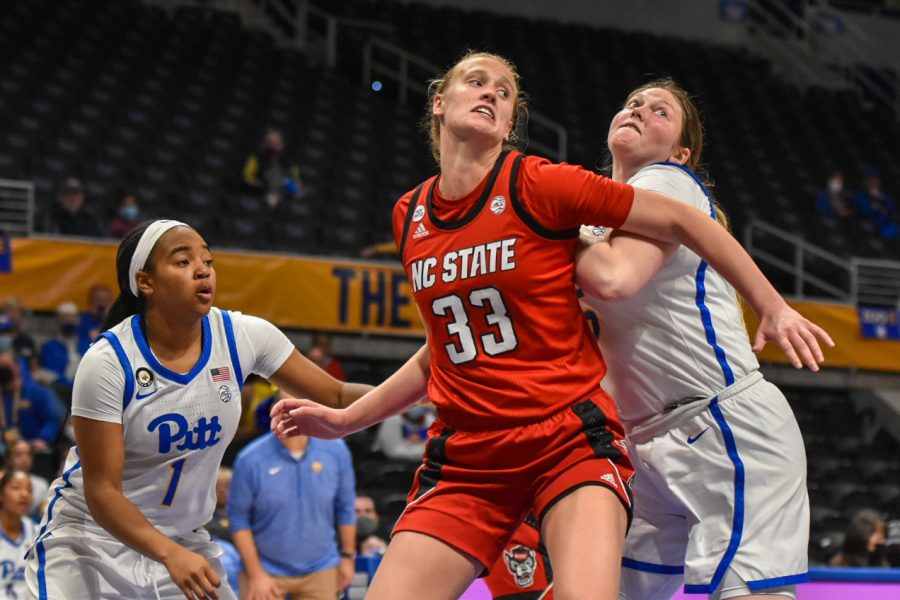 Pitt women’s basketball played its ACC opener against the powerhouse No. 2 North Carolina State at home on Friday night. The Panthers, who entered the game riding their best start since 2009, simply couldn’t keep up with the Wolfpack and suffered a tough 89-54 loss.

Head coach Lance White acknowledged that the Wolfpack outmatched his group and looked to use Friday as a learning experience.

“Obviously they are better than us,” White said. “Now we can look at some glimpses at when we did execute.”

The Wolfpack came out in a one-three-one zone press off of made baskets that gave the Panthers trouble. This led to a couple of early turnovers on cross-court passes. Pitt struggled to get its offense initiated and spent a lot of its possessions working the ball out of the backcourt.

Just before the end of the first quarter, senior guard Jayla Everett stole the ball and quickly ran up court. In a wild turn of events, Everett ended up losing the ball and NC State graduate student guard Raina Perez made a half-court shot at the buzzer, punctuating an already deflating quarter for the Panthers.

The Panthers found themselves in a 22-10 hole after the first quarter and had little success scoring the ball. They were able to work for some good looks, but couldn’t convert them.

Everett kept the Panthers alive with her energy early in that first quarter, hitting multiple threes and playing tight defense. Everett continued to bring this energy in the second and sparked stronger defense from the Panthers by forcing a turnover on the Wolfpack’s first possession in the period. Junior center Rita Ibogkwe followed this up with a block of her own.

The Panthers started to attack the basket more in the second quarter as well. Junior guard Emy Hayford scored on a lay-in, Amber Brown drove and got to the free-throw line, and Everett scored inside as well. The Panthers still saw limited success, and besides a flurry of scoring from Everett toward the end of the half, they didn’t have much to get excited about. Pitt trailed 42-23 at the half.

The start of the second half featured more struggles for Pitt. Everett couldn’t seem to hit a shot early on and the Wolfpack continued to widen the gap. The Wolfpack continued to move the ball around well and hit their open shots. The lead quickly widened to well over twenty points during a long scoring drought for the Panthers.

Late in the third, Everett, who is first on the team in scoring and second in minutes played, went to block a shot and came down hard on her right side. The crowd quickly went silent. Everett eventually walked off under her own power and, while a bit shaken up, didn’t suffer a major injury. Everett did check back into the game for a short time in the fourth quarter.

The Panthers began to run a press defense of their own during the third quarter, but the Wolfpack appeared unfazed by the change. They forced Pitt back into a half-court defense with smooth lateral passing and great ball control. The Panthers began to pick up the scoring later in the quarter, but not enough to make a dent in the NC State lead. They went into the fourth down 66-33.

The fourth quarter was more of a victory lap for NC State than anything else. The Wolfpack pulled out all their starters and coasted to the end of the game.

Pitt simply couldn’t stop the Wolfpack’s relentless offense. Perez and junior center Camille Hobby each scored 15 points for NC State. They were excellent from the three-point line all night, shooting 44.1% for the game.

“You have to pick your poison,” White said. “We took away their inside game and let them shoot threes. We were hoping they would miss some of those threes but obviously, they didn’t.”

White also said the Panthers needed to work on their closeouts and defensive rotations to make the Wolfpack take more difficult shots.

On offense, the Panthers couldn’t muster much besides Everett’s prolific shot-making. The group looked stagnant on the offensive end and frequently looked unsure of what to do when the ball wasn’t in Everett’s hands. In the first half, Everett scored nearly half the points and was the only Panther to make a three-pointer. Junior guard Destiny Strother was the only other Panther to hit a three-point shot. She made two, both of which came in garbage time.

Pitt was outrebounded, committed more turnovers and shot worse than NC State. This was not a competitive matchup from the tip, and despite their improvement from the last year, the Panthers were not yet equipped to handle the No. 2 team in the country.

The Panthers had seen lots of success on the glass in their past few matchups, but struggled to rebound against the Wolfpack. NC State racked up 17 offensive rebounds while Pitt managed only 12.

One of the few bright spots for the Panthers was the play of junior guard Destiny Strother. She put up 10 points and four rebounds, making her the second-leading scorer for the Panthers.

White and the players didn’t seem discouraged by the loss and are looking forward to wipe this one from their memory.

“I don’t think it’s a problem,” Amber Brown, a junior forward, said. “We knew what it was going into it. … Now we need to grow from it.”

The Panthers have nine days before they go on the road to play No. 22 Notre Dame. The game is on December 19 at 2 p.m. at the Joyce Center, and fans can stream it on the ACC Network Extra.