‘Not there yet’: Ahead of Heisman ceremony, Pickett looks to keep climbing after college 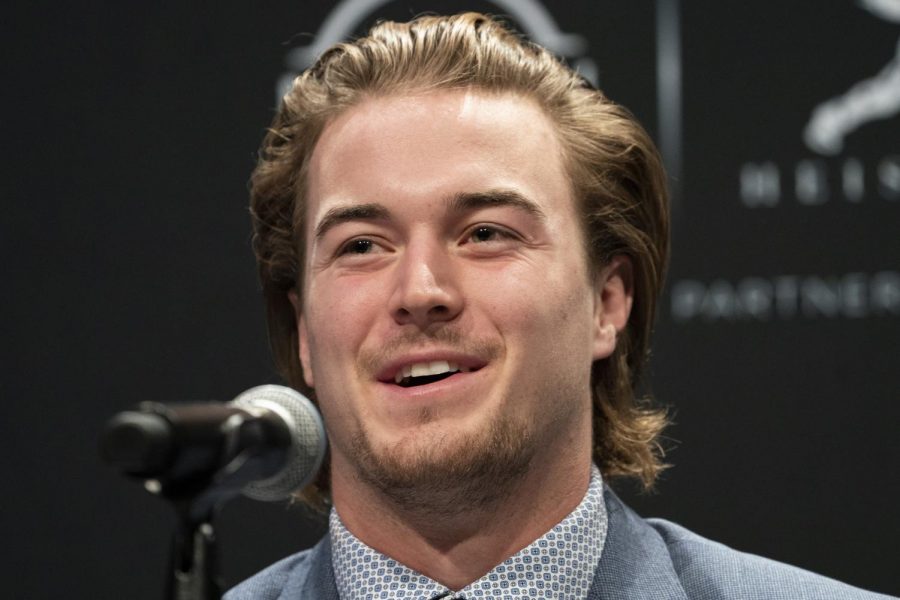 NEW YORK — Scrolling down to the bottom of Pitt redshirt senior quarterback Kenny Pickett’s Instagram, you’d find a post with a simple message — “One day, I want to honestly say, ‘I made it.’”

But Pickett said he still hasn’t “made it” to where he wants to be just yet.

“I’m close,” Pickett said. “I’m not there yet. This wasn’t the moment I was envisioning when I posted that in eighth grade. But I left it on there for a reason… that day is approaching here shortly but this is definitely a step to that journey.”

Pickett grew up in Oakhurst, New Jersey, just 45 minutes from New York. The fifth-year said he fell in love with college football as a kid while watching the USC Trojans dynasty with his father. Household names and future NFL standouts played on those teams,including Heisman winners running back Reggie Bush and quarterback Matt Leinart. Pickett said to follow in their footsteps is a really special moment for him.

“My first memories are the Reggie Bush, Matt Leinart and Brady Quinn era [of college football],” Pickett said. “That was kind of when I fell in love with college football… I would always watch the games with my dad. I just have flashback memories to that… going back to when I was eight or nine-years old watching those games and now I’m sitting here — it’s pretty surreal.”

While falling in love with the sport alongside his father, Pickett said his dad also doubled as a mentor and coach throughout his career. The fifth-year also said his dad is his inspiration to succeed on the gridiron.

“He still is like a coach,” Pickett said. “I call him after every game and I talk to him throughout the week. He asks a lot of great questions and keeps me on my toes… I just have a ton of great memories through football, I’m grateful for the sport. But my dad definitely had the biggest influence on me.”

Pickett set lofty goals for himself going into his final season with the Panthers. Most of his goals were team oriented — wanting to win both a Coastal Division title and ACC Championship, both of which he accomplished.

En route to winning Pitt’s first ACC Championship game, Pickett shattered legendary Panther records, including those set by former quarterbacks Alex Van Pelt and Tyler Palko. But one of the quarterbacks he usurped has a name with a lot of weight to it — NFL Hall of Famer Dan Marino. Pickett said he and Marino have developed a relationship over the years and it’s one he’s very thankful to have.

“[Marino] is the guy I’ve looked up to since I signed here at Pitt,” Pickett said. “All the great things he’s done, to have my name alongside his and sit on a stage with him down in Charlotte — I have no words for it.”

When watching his sophomore season, not many people would have expected Pickett to make the jump he made in his game — and knows that. But Pickett said his mentality has always been that he’s the best player on the field.

“I have high expectations for myself,” Pickett said. “I believe with every ounce of my being, every time I step on the field I feel like I’m the best player. I think it’s the only way and mindset you can have to be successful. It’s just the way I play the game. I’ve always believed in myself and I publicly bet on myself last year coming back and proving it to everyone.”

Pickett sat Saturday among members of annual college football powerhouses — Michigan, Alabama and Ohio State. Pickett’s dominance at Pitt this season was nearly unprecedented, as the school has not had a finalist since Larry Fitzgerald made the trip in 2003. The fifth-year said representing Pitt means a lot to him.

“It’s an incredible feeling to bring Pitt back to where it was,” Pickett said. “All those big name schools and Pitt’s right back there right where it should be — just a lot of pride.”

Pickett shattered records this year, leading Pitt to new heights and rejuvenating a Pitt program that many feared was in a never ending cycle of mediocrity. Ahead of the Heisman ceremony, Pickett said he’s proud of what he’s done to get to this point, regardless of whether he wins or loses.

“There’s nothing I can do,” Pickett said. “Everything I can do is done so I feel great. It’s not like I have a game I’m going to play or anything else. Whatever happens happens. It’s been an unbelievable journey.”

The ceremony will begin at 8 p.m and air on ESPN later Saturday.