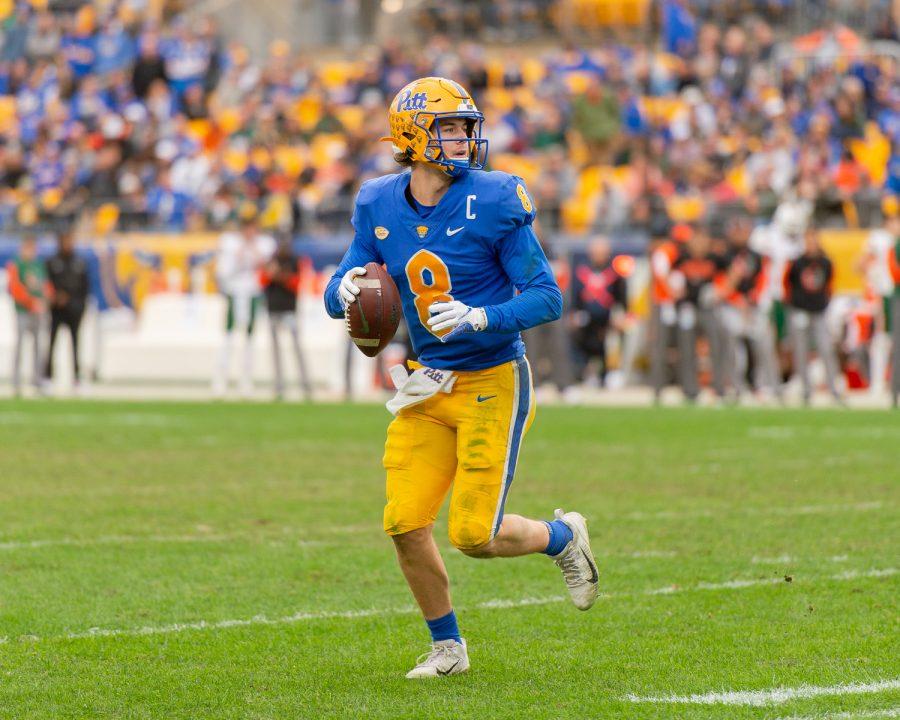 Redshirt senior quarterback Kenny Pickett (8) looks to throw the ball at the Pitt vs. Miami game.

Redshirt senior quarterback Kenny Pickett announced Thursday night that he would forgo Pitt’s Peach Bowl matchup and instead begin preparing for the NFL Draft, confirming his record-breaking career at Pitt was over.

Pickett announced last December that he was returning to Pitt for a final season in a tweet captioned “One more year. #H2P.” Pickett released another statement Thursday night on Twitter, nearly a year to the date from his last announcement. This time, the caption was not an indication of Pickett putting on the Pitt blue and gold for a final time — “Forever a Pitt Man #H2P.”

Pickett said after the ACC Championship Game that he planned on playing in the Dec. 30 bowl game. But after offensive coordinator Mark Whipple left the program to join Nebraska, Pickett walked back his initial commitment, saying he would talk it over with his family before making an official announcement.

This announcement officially put an end to Pickett’s historic season. Pickett ascended up the Pitt record books, leading one of the most prolific and explosive offenses in the entire country. The quarterback broke the program’s single-season passing yards, passing touchdowns and total touchdown records.

He came back for one more year and did this:

While earning individual accolades, Pickett led the team’s reemergence back onto the national stage. Pitt reached the 10-win threshold for the first time in 40 years, won its first ever ACC Championship and finished the season ranked as the No. 12 team in the nation.

Upon announcing his return, he maintained the goal was to win a championship. Pickett said accomplishing these goals is what he envisioned when he announced he was coming back for a final year.

“That was why I came back,” Pickett said. “I felt that strong about myself and what I can do. On top of that, the team and the talent we had coming back — this was absolutely everything I had envisioned. To say you’re going to do something and go out and do it, it’s a really special thing.”

Head coach Pat Narduzzi has not made a formal announcement, but the Panthers will likely turn to junior quarterback Nick Patti to step in for Pickett against Michigan State. The Peach Bowl will kickoff on Dec. 30 at 7 p.m. and air nationally on ESPN.