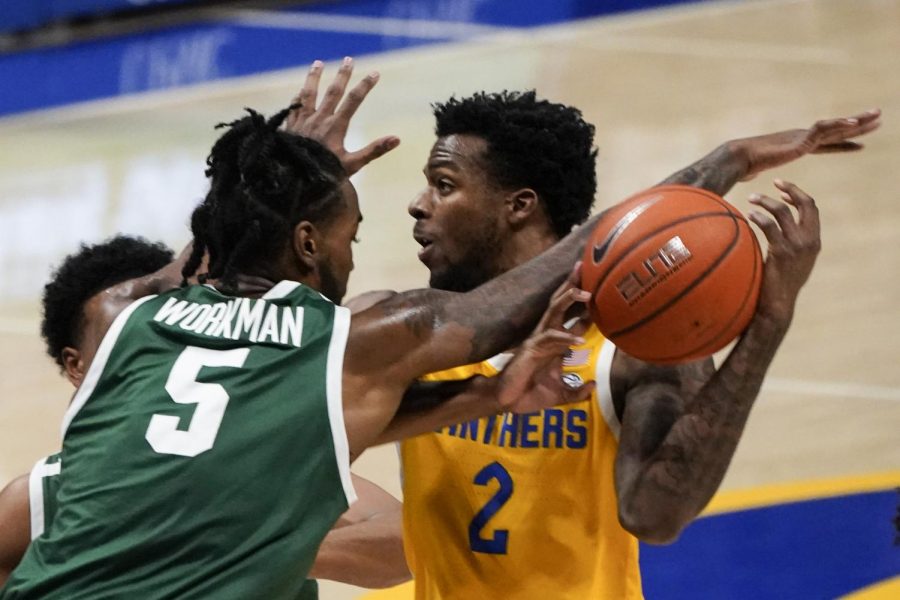 Jacksonville's Bryce Workman (5) fouls Pittsburgh's Femi Odukale (2) as he shoots during the second half of an NCAA college basketball game, Tuesday, Dec. 21, 2021, in Pittsburgh. Pittsburgh won 64-55.

Pitt men’s basketball faced off with Jacksonville at the Petersen Events Center on Tuesday and earned a much needed win in the midst of a rocky start to the season. The Panthers won 64-55 and controlled the game from tip to buzzer.

Pitt (5-7 overall, 0-1 ACC) came out hot from beyond the arc, scoring its first points off of a 3-pointer from senior guard Jamarius Burton, and proceeded to hit five more triples in the first half alone. The Panthers rode this momentum for the rest of the first half and never trailed during the first 20 minutes.

However, Jacksonville (7-4 overall, 0-0 Atlantic Sun) did keep things close throughout most of the game. After falling behind by as many as 10, the Dolphins closed the gap to two points by the end of the half.

Early on in the second half, the Dolphins came out firing. Redshirt junior guard Kevion Nolan hit a 3-pointer with his first attempt of the period to give the Dolphins their first lead of the game. Jacksonville was up 32-28 with 16:35 left in the game before Pitt took control.

Started by a 3-pointer from sophomore guard Femi Odukale, the Panthers went on a 22-3 run that lasted 8:32 to go up 50-35 with just over eight minutes remaining in regulation. Odukale and senior forward Mouhamadou Gueye scored or assisted on every Pitt basket during this stretch. Gueye also headlined the dominant stretch with a monstrous slam over a Jacksonville defender that brought the crowd to its feet.

The Panthers coasted the rest of the way, with the Dolphins running out of time to mount a real comeback. Ultimately, Jacksonville couldn’t score points for much of the second half and struggled to get stops.

The Dolphins largely relied on tight man to man defense all afternoon. The Panthers found success in the pick and roll, especially when they initiated it on the right side of the court. Odukale started to draw double-teams in the second half, leading to lots of easy layups for his teammates.

On the other end, Nolan tore up the Panthers defense — hitting six three-pointers to keep the Dolphins within striking distance. Nolan ended the game with 22 points in the loss and was really the only bright spot for the Jacksonville offense.

Not to be outdone, Odukale lit up the stat sheet scoring 28 points, which tied his career high. He did it efficiently as well, shooting over 70% from the three point line and hitting five of the nine Panther three-pointers.

On the other hand, sophomore forward John Hugley struggled. He shot just one of eight from the field. Hugley had been the Panthers’ leading scorer, but hasn’t scored double digit points in his last two games. Although Hugley struggled to score, he performed well on the glass — grabbing nine rebounds, and he kept the ball moving for the Panther offense.

Both teams struggled to shoot the ball for most of the night, recording field goal percentages well below 40%, but they did shoot rather well from beyond the arc.

Although the Panthers were able to pull out the win tonight, they did it largely without the help of the bench. Nine players played, but only five of them scored at all and only four scored more than one point. Pitt relied heavily on the starters, who scored all but one of the team’s 64 total points.

Regardless of how they got it, the Panthers desperately needed this win to sustain the momentum created by a last-second win vs. St. John’s on Saturday. After losing their conference opener and a flurry of close matchups, Tuesday’s victory was a positive way to close the non-conference portion of their schedule.

The Panthers are next in action on Dec. 28, when they host Notre Dame for an 8 p.m. tip off. ESPN2 will broadcast the game.