Pitt’s ‘next man up’ mentality not enough in Peach Bowl, fall to Michigan State 31-21 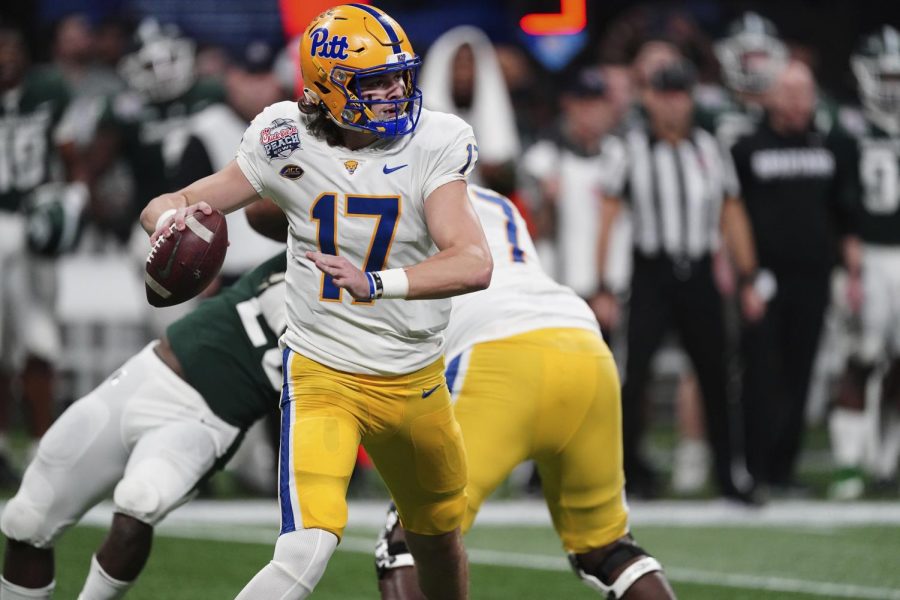 Pittsburgh quarterback Davis Beville (17) looks to pass against Michigan State during the first half of the Peach Bowl NCAA college football game, Thursday, Dec. 30, 2021, in Atlanta.

Many predicted Pitt to continue its cycle of mediocrity and finish in the middle of the pack in the ACC before the 2021 season. About five months later, the Panthers became ACC Champions, the nation’s No. 12 team and played in a prestigious New Year’s Six Bowl game.

It’d be easy for Pitt to rest on its laurels and go to the Peach Bowl in Atlanta to just enjoy the finality of an already historic season — especially with their leader and Heisman finalist quarterback Kenny Pickett opting out of the game. But according to redshirt senior tight end Lucas Krull, he and his teammates wanted to be more than historic.

Pitt football eclipsed 12 wins in a single season just once before, when the Panthers claimed the National Championship in 1976. And for now, the 1976 team will remain alone in this elusive club. Pitt fell to the Michigan State Spartans 31-21 on Thursday night despite holding the Spartans to just 56 yards rushing.

Head coach Pat Narduzzi said while it’s a bitter ending to the season, he won’t let it get in the way of moving towards winning another championship next year.

“It’s never easy,” Narduzzi said. “We got a lot coming back… we’ll start to work tomorrow towards an ACC Championship for next year and that’s the goal — that’s the standard.”

Miscues on special teams and slow starts plagued the Panthers for much of the season — this time these issues came together. Sophomore running back and kick returner Israel Abanikanda watched the opening kick sail over his head and bounce on the one-yard line. Instead of going through the endzone for a touchback, the ball bounced back into the field of play, allowing the Spartans to pin Pitt deep in their own territory.

Michigan State capitalized, forcing a three-and-out and the Panthers to punt. After a short punt, the Spartans wasted no time in scoring a 28-yard touchdown on the game’s third play, taking an early 7-0 lead.

But stand-in starting quarterback junior Nick Patti roared back to lead a 12-play, 75-yard drive — one he capped off with a 16-yard rushing touchdown to bring the score back to even at 7. When Patti dove for the pylon, rather than celebrate his triumphant scoring drive, he remained on his knees while grabbing his shoulder.

The next time Pitt saw Patti, his arm was in a sling and redshirt sophomore quarterback Davis Beville was strapping on his helmet to get ready to lead the Pitt offense.

Beville entered the game with a total of eight completions for 88 yards and no touchdowns in his collegiate career. But ready or not, he was Pitt’s quarterback as the program attempted to win 12 games for just the second time ever. Beville said despite being No. 3 on the depth chart, he was ready to come in and compete.

The Panther defense may have bent, but it refused to break. While surrendering plenty of yards early on, it refused to let the Spartans into the endzone. Michigan State attempted two field goals after making it into Pitt territory, converting one of the two to put the Spartans up 10-7.

After making it into Panther territory for the third time in four tries, Spartan sophomore quarterback Payton Thorne threw into double coverage and sophomore safety Brandon Hill jumped to intercept the pass — giving Pitt all of the momentum.

Beville sparked the drive when he rolled right and found sophomore receiver Jordan Addison about 20 yards downfield. But the Biletnikoff winner reversed field, made one man miss and extended the play, running for a 52-yard gain.

Pitt headed into halftime with a 14-10 lead over the Spartans. But the Panthers didn’t waste any time extending their lead after the break.

Junior defensive lineman John Morgan III drilled Thorne on the third play of the half and knocked the ball loose. The ball skipped off of the turf and senior linebacker Cam Bright scooped the ball up and ran it back 26 yards for a Panther touchdown. The score put the Panthers up by two possessions with a 21-10 lead.

After picking apart the Panther defense on its first three drives, the Spartan offense picked up just 104 yards on its next five. This trend was a continuation of the defense’s performance in the ACC Championship — once it had some time to figure out the opposing offense, it found its footing and buckled down.

Fortunately for the Panther offense, its defense refused to break — because the offense didn’t seem to come out of the locker room in the second half. The Panthers picked up just 37 total yards of offense while the Spartans picked up 50 yards in the third quarter.

But eventually, the Panther defense did break. Thorne uncorked a pass high as his receiver made a leaping grab in the endzone for a Spartan touchdown about halfway through the fourth quarter. The Spartans elected to go for the two-point conversion but Pitt shot the attempt down to keep the score at 21-16.

Pitt had an opportunity to put the game away after receiving the ball after the Spartan score. But the Panthers gave the ball right back to the seemingly rejuvenated Spartan offense after gaining just seven yards on three plays.

The Spartans and Thorne capitalized once again. Michigan State went 71 yards on 11 plays, which Thorne capped with a 22-yard touchdown pass to put the Spartans up 24-21 after adding a two-point conversion. Senior linebacker John Petrishen said it seemed the Spartans had an answer for everything he and the defense were throwing at them.

“There were several times throughout the game, I think at least three times, when I would tell [SirVocea Dennis] or somebody else that [the Spartans] ran the perfect play call for the play call that we had on defense,” Petrishen said.

With just 2:51 remaining, Beville and the struggling offense found itself on the ropes. Beville led the offense deep into Spartan territory, but his inexperience showed when it mattered most.

The sophomore quarterback threw the ball directly into redshirt first-year Cal Haladay’s hands, and he took it 78 yards to seal a 31-21 Spartan win. Narduzzi said he thought Beville performed as well as anyone could have expected him to.

“Davis did a great job,” Narduzzi said. “As good as you expect a third-team quarterback to do. Wasn’t good enough to win the football game. But all our guys hung in there and played their tails off for him … it doesn’t ever lie with one guy.”

While Pitt may have fallen short in its postseason game, the 2021 Panthers broke a 40-year drought of reaching 10 regular season wins. The team will now take time off before starting spring practices and preparing for the 2022 season. Senior linebacker Phil Campbell III said the loss was an emotional one, with the game his last at Pitt, but he won’t let it take away from this year’s historic season.

“You just got to look at the positives. We had a great season,” Campbell said.

Campbell added that he wanted to see his teammates continue to climb next season and build upon what he and his fellow seniors spent several years building.

“I told all of the younger guys, ‘Just keep it going,’” Campbell said. “It took a long time for us to get here and that ACC Championship. I really just want it to keep going. That’s really my biggest thing — I just want Pitt to keep going up.”