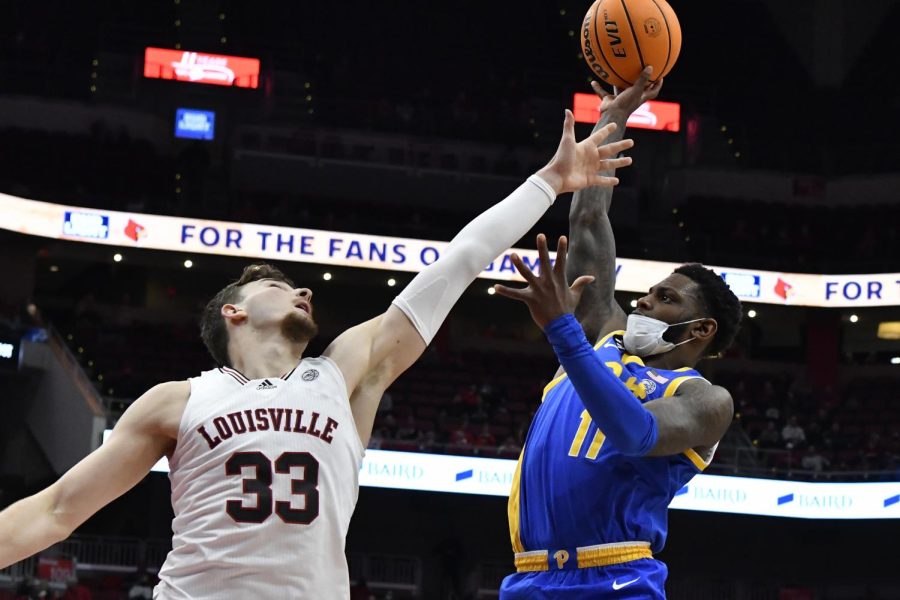 The Panthers got off to a rough start. With the game still scoreless, Pitt received a flurry of technical fouls. The early hole started with a foul on sophomore forward John Hugley. He disagreed with the call and quickly received a technical foul for getting into an argument with Louisville senior forward Malik Williams, giving him two early personals.

Capel said postgame that he was confused because he hadn’t seen the initial altercation between Hugley and Williams.

“I didn’t see what happened,” Capel said. “I was trying to figure out what happened when the next tech was called.”

With Hugley on the bench and Pitt already almost in the bonus, the Panthers were in trouble. Graduate student forward Mouhamadou Gueye converted an and-one to give Pitt its first points of the game and some energy early on, but Pitt was still down 8-3.

The Panthers were forced to go to their reserves earlier than normal. Sophomore forward Noah Collier played critical minutes and took advantage of them. He rebounded well, attacked the basket and drew multiple fouls.

The Panthers also moved to a 2-3 zone defense and a 2-2-1 press after made baskets. Pitt’s zone look was successful early and forced Louisville to slow the game down by moving the ball on the perimeter.

Despite the early drama, Pitt kept things close and didn’t let Louisville pull away. With just five minutes to go in the first half, redshirt junior guard Ithiel Horton tied the game at 21 points apiece with a 3-pointer. The game wouldn’t stay tied for long though. Louisville quickly responded with a triple of its own and retook a one-possession advantage.

Louisville started a bit of a run late in the half and had an opportunity to take the first double-digit lead of the night. But they blew a layup on the break, and Horton then hit another three to cut the lead back to five. Pitt went into the half down 35-32.

Hugley was back on the court for the start of the second half and hit a smooth post jumpshot for the period’s first points. Senior guard Jamarius Burton scored a tough layup and got fouled to give the Panthers their first lead of the night at 37-35.

Burton said postgame that he didn’t practice all week because he was going through the ACC’s COVID-19 protocols. He had to play the entirety of the game with a mask — one that started in position over his nose and mouth at the beginning of the contest, but drifted lower below his nose and mouth while he played. He finished with 21 points and six rebounds.

Pitt and Louisville went back and forth throughout the second half. At the 12:30 mark, Gueye hit a clean turnaround jumper. Hugley followed up with a thunderous and-one dunk the next possession to give the Panthers the lead again at 49-46.

Neither team could pull away. With 4:43 to go in the game, the score was tied at 63 following an emphatic dunk from Gueye. Louisville junior guard El Ellis, Tuesday night’s leading scorer, laid the ball up to give Louisville the lead, 65-63. Ellis then drew a foul after stealing the ball with just under three minutes remaining. Since Pitt was in the bonus, Ellis went to the line and sank both free throws to put the Cardinals up 67-63.

Pitt continued to try to get the ball to Hugley late in the game, but ultimately couldn’t quite close the gap. Louisville hit a big three with just under a minute to play and Pitt was left to play the free throw game in the final minute. Louisville missed its first two free throw attempts with just under 30 seconds to go, giving the Panthers a chance to battle back.

Four Pitt free throws resulting from technical fouls, called on Williams and Louisville head coach Chris Mack for arguing with the referees, brought the lead back down to three with just 15 seconds left to play.

Louisville hit two free throws to extend the lead back to five, but Burton hit a clutch 3-pointer to make it 74-72 with 7.6 seconds to play. Pitt fouled again and Louisville made one of two free throws, which put the team up just three and gave Pitt a chance to tie. Hugley grabbed the rebound off the missed free throw and gave the ball to Burton, who sprinted the ball up the court and just missed a last-second three wide right.

Hugley quickly established himself in the second half, despite the bizarre start to the game. He scored 11 second-half points and was a dominating presence in the paint scoring most of his points in the paint and fouling out Williams.

Capel felt his big man played great during his limited time on the court due to foul trouble.

“[Hugley] played with force and power and I thought he gave us a great lift,” Capel said.

Horton was a spark plug for Pitt off the bench, tallying 13 points in the first half on outstanding efficiency. This was Horton’s first game of the season following an arrest earlier this season, with the charges and team suspension dropped recently.

Burton and the rest of the Panthers were relieved to finally have Horton playing again after his hiatus from the team.

“It was great to see him play after so long,” Burton said. “I look forward to playing with him more during the season.”

Pitt dug much deeper into the bench than they have in past outings. Hugley barely played in the first half allowing Collier to play some important first-half minutes, and Horton played lengthy stretches as well. Pitt went eight players deep and had 18 bench points.

Pitt will now welcome Boston College to the Petersen Events Center on Saturday for a 4 p.m. tip off, which will air on the ACC Network.