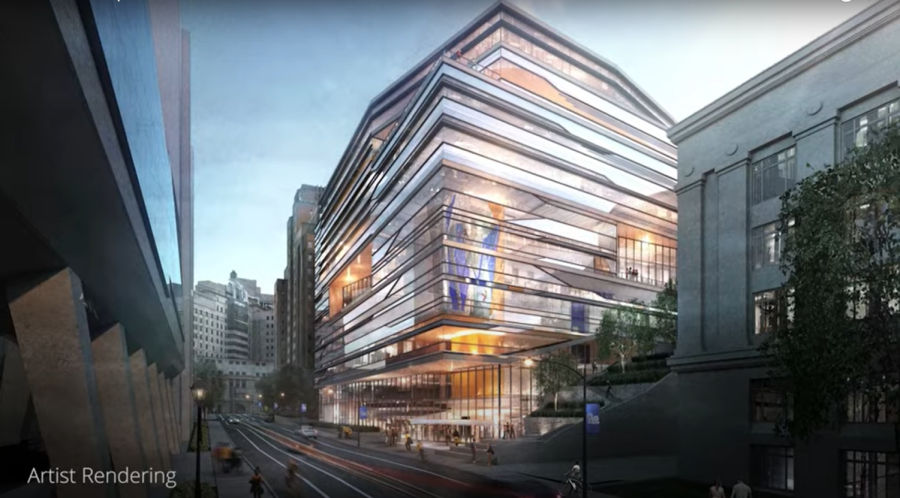 An artist’s rendering of the exterior of Pitt’s pending Campus Recreation and Wellness Center.

Kaylea Gallagher, a member of Pitt’s dance team, said exercise is a frequent part of her day-to-day routine. She said the new recreation and wellness facility is going to be “a really good” addition to campus.

“It’s going to be in the heart of campus. People who live on upper campus tend to go to the Baierl and Petersen Events Center, and people who live on lower campus tend to go to the William Pitt Union Gym,” Gallagher, a sophomore biology major, said. “We both will get to meet in the middle, and based off what they’re saying, I think it’s going to allow for everyone to get what they need right in one place.”

The new campus recreation and wellness facility is currently under construction at the site of the former O’Hara Garage and Learning Research and Development Center building. This project is a part of Pitt’s Campus Master Plan finalized in 2019, and will feature a recreational pool, jogging track, weightlifting equipment, basketball courts, multipurpose rooms and more, according to Anastasia Dubnicay, a Facilities Management project manager who oversees the center’s development and construction. The building is projected to be approximately 270,000 square feet and nine stories, according to Dubnicay.

The project entered its third phase of construction last August, which includes demolition of the LRDC building. According to a press release, the University plans to break ground on the facility in spring 2022 and will open in fall 2024. The building was originally projected to open in fall 2022.

Pitt community members serve on feedback panels to aid in the project’s planning. Dubnicay established an advisory committee in 2019, and said the feedback panels included “groups of students, faculty and staff across schools, departments and disciplines.”

“Diversity and inclusivity were important in forming advisory feedback panels, ensuring a diverse representation of the Pitt community members to capture different needs, thoughts and ideas incorporated into the project,” Dubnicay said. “The Capital Projects team continues to meet with Student Affairs and the advisory panels as the design is being finalized with the architects.”

An aspect of design already confirmed is the reconstruction of University Drive to make the building more accessible, and the hillside more pedestrian friendly. According to Dubnicay, the Office of Planning, Design and Real Estate project team partnered with the Office of Engagement and Community Affairs project team “to ensure community members are aware of the road re-configuration.”

“University Drive has been reconfigured to increase the safety of pedestrians who are traversing the hillside from lower to upper campus,” Dubnicay said. “Still to come, currently in design, are various pedestrian pathways and bike paths throughout to maximize usability of the hillside.”

Sustainability elements are a focus of the building’s design, projected to include ample natural light and energy efficiencies, sustainable stormwater management and biophilic design elements, according to  Student Affairs’ website. Dubnicay said the design is aimed to support Pitt’s sustainability plan, which was released in 2018.

“A stormwater management system is proposed for the hillside area development, serving the new Campus Recreation and Wellness Center and additional buildings,” Dubnicay said. “The proposed system will allow the University to gather stormwater on premise for reuse.”

According to Gallagher, Athletic Director Heather Lyke mentioned to her that a dance studio may be included in the new facility. Although not confirmed as an amenity, Gallagher said this space could be an area for the dance team to practice in.

“Hopefully they do put a dance studio in there, but whether if they do or not, I think it’s still beneficial and dance team will still be able to use it,” Gallagher said.

Gallagher said she is excited about the wellness and well-being aspect of the facility. According to the University, proposed wellness amenities include meditation and yoga spaces, and the building aims to provide “a holistic approach to support,” alongside physical.

She said it’s “helpful” that the building is trying to include more than just aspects of a traditional gym environment, like cardio machines and weights.

“Especially during studying and with college academics, it’s important to be able to take care of yourself when you have free time, and I think it will provide a lot of benefits to students,” Gallagher said. “I’m excited for the other things they mentioned were going to be incorporated like yoga and different courts where you can get different exercise like volleyball.”