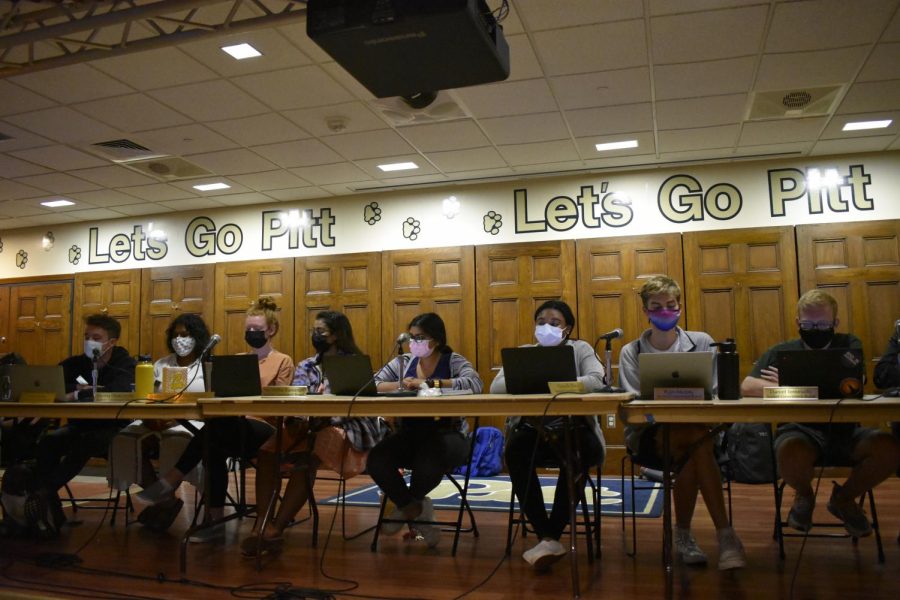 Student Government Board at its weekly meeting in Nordy’s Place on Sept. 21, 2021.

During last academic year’s Mental Health Awareness Month, a number of cultural and ethnic organizations joined forces to organize a roundtable event focused on intersectionality. It was after this event that many student leaders were inspired to continue working together, according to Danielle Floyd, Student Government Board’s vice president of initiatives.

“After that event happened, a lot of different people reached out to kind of all of us asking, ‘So when is there going to be another opportunity for us different cultural organizations to collaborate with one another?’” Floyd, co-chair of the Students of Color in Solidarity task force, said.

According to Floyd, it was then that the idea for a collective with the purpose of building “a community amongst communities of color at the University of Pittsburgh” was born. After deliberation, Floyd said the groups ultimately chose to form the SOCS task force under SGB.

“The whole idea behind why it should be held in SGB is to ensure that SGB continues to have a platform where specifically students of color are able to effectively communicate their needs here to administration, especially at a predominantly white institution,” Floyd, a junior economics major, said.

According to Enomoto, a SOCS subcommittee will work this spring on creating an ethnic studies certificate. The Ethnic Studies Certificate subcommittee will be “looking at the layout of the certificate, on what kind of classes are currently offered at Pitt and drafting the official proposal to present to the academic affairs side of the faculty unit,” Enomoto said.

“The creation of the certificate is for future students at Pitt so that they can learn about ethnic studies and ethnic Americans in a way that the student leaders currently think will be best,” Enomoto said.

Enomoto said she plans to include all member organizations in SOCS, as well as nonmember ethnic organizations, in the drafting process. According to Enomoto, garnering “as much student input as possible” will allow for the best implementation of the certificate.

SOCS members also organized an event earlier this academic year for Mental Health Awareness Month, where students of color gathered to discuss their experiences of mental health in their own communities and others. Enomoto described the event’s success as an indicator of student desire for such events and conversations.

“I think we’ve seen from the turnout and success of both those events last year and this year that students do want to engage in cross-cultural conversations,” Enomoto said. “However, there needs to be the space created for those. So I think that SOCS does a good job of doing that.”
Another initiative SOCS has undertaken is revising diversity and inclusion training for student leaders, Bhuvitha Chagantipati, co-chair of SOCS, said. Chagantipati said the University currently offers a 14-hour training course through its Racial Equity Consciousness Institute.

“Not a lot of students have that time commitment, or would be able to put in that time towards it. So trying to find ways to condense that training has been difficult,” Chagantipati, a junior global and popular music and biology major, said.

According to Floyd, SOCS will also work on gathering student input on Pitt’s nondiscrimination and anti-harassment policy, which the University plans to update.

“We’re hoping to work with the co-chairs of the EIDAC committee, to gather student input on the nondiscrimination policy, how it can kind of just better work for students of color here on campus,” Floyd said.

Although increasing membership remains a challenge — especially during the ongoing COVID-19 pandemic — Floyd said she encourages student leaders of underrepresented cultural and ethnic organizations to join the task force.

“We’re actively looking for student leaders,” Floyd said. “If you’re an organization that represents a community of color that is unrepresented at Pitt, the SOCS task force was created to kind of give your community a voice.”

“I think it’s important that we continue to water the seeds that kind of came about during the upward of social justice movements that came about last year,” Floyd said. “As we have more student organizations join the task force, the work itself will become a little bit easier to do.”