Pitt athletics powers on despite COVID-19 postponements over winter break 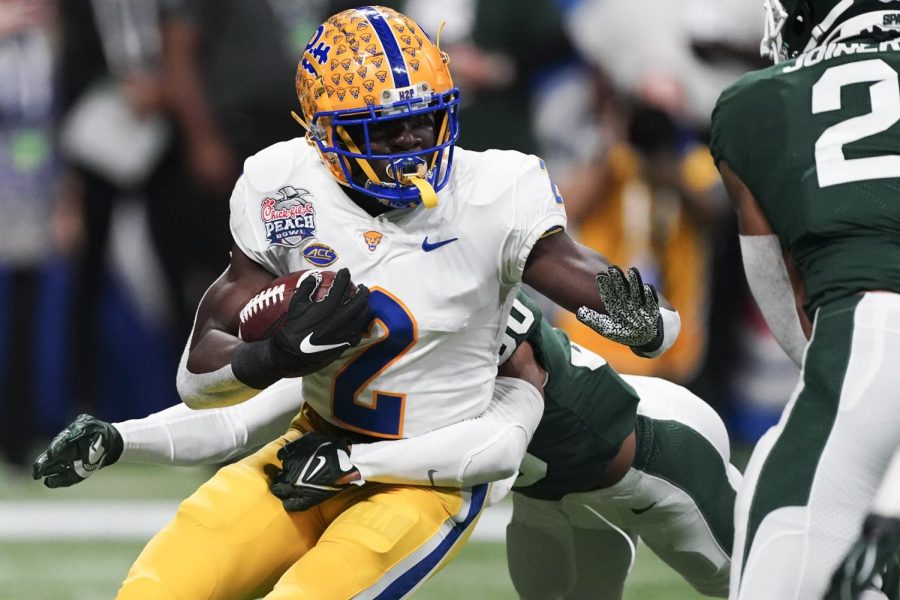 Pitt sophomore running back Israel Abanikanda (2) runs against Michigan State at the Chick-fil-A Peach Bowl in Atlanta on Dec. 30, 2021.

While Pitt students departed campus after final exams in mid-December, Pitt athletes remained with their teams as winter sports began their seasons in earnest.

COVID-19 cases are surging nationally, and the Panthers weren’t immune. The gymnastics and swimming and diving teams had to adjust their schedules to accommodate teams who had gone into COVID-19 protocols.

Here’s how the rest of the squads fared during the games they did play over the holiday break.

But in the early days of the offseason, the Panthers received two pieces of news that helped ease the sting of defeat. The first came when USC junior quarterback Kedon Slovis announced on Dec. 21 that he would transfer to Pitt for the 2022 season. Slovis threw for 30 touchdowns and 3,502 yards at a 72% completion percentage in his first season with the Trojans, but he struggled with injuries in his later years. Slovis played only nine games in 2021, throwing 11 touchdowns and 2,153 yards.

The second piece came the next day, when redshirt senior offensive linemen Owen Drexel, Gabe Houy, Marcus Minor and Carter Warren simultaneously announced that they would return to Pitt for one more year. The rushing attack improved with this line blocking, going from 3.4 yards per attempt last season to 4 yards per attempt this season. They also kept fifth-year senior Kenny Pickett from hitting the ground too often, only allowing 2.5 sacks per game.

The Panthers were scheduled to visit rival West Virginia for the Backyard Brawl on Jan. 8, but the meet was postponed when Pitt announced that it had been dealing with COVID-19 issues within the program. Both schools agreed to reschedule the meet for Jan. 17.

Pitt will have one meet before then, at Denison University on Jan. 14.

No. 22 Pitt traveled to Columbus, Ohio, to take on No. 7 Ohio State on Dec. 12. The Panthers lost to the Buckeyes 30-7, as redshirt seniors Nino Bonaccorsi and Micky Phillippi picked up the only two wins for Pitt in the 10 bouts. Despite the loss, the Panthers moved up one spot in the National Wrestling Coaches Association rankings to No. 21.

They then participated in the Illinois Matmen Open two weeks after the loss to Ohio State. Several schools — including multiple on Pitt’s schedule — sent wrestlers to the NOW Arena in Illinois to participate in the event, which replaced the canceled Midlands Championships.

Redshirt seniors Gage Curry, Elijah Cleary, Jake Wentzel and Gregg Harvey, along with redshirt junior Cole Matthews all won medal matches in their respective weight classes. Cleary was the only wrestler who won a first-place medal match, but the entire team earned 121.5 points throughout the two-day stretch — the most among the participating schools — to win the event.

Pitt canceled its next match on Jan. 7 against in-state foe, and fellow Matmen Open opponent Penn, due to COVID-19 issues among the Quakers. The Panthers replaced that match with two home meets on Jan. 9, the first of which came at noon against a winless Army squad. The Panthers won that match 29-10, highlighted by Matthews’ pin victory over Army sophomore Thomas Deck.

But Pitt could not sweep the afternoon, as No. 3 Michigan won 29-12. In spite of the loss, Matthews continued his great day on the mat by defeating graduate student Stevan Micic — the third-ranked wrestler at 141 pounds — in his bout by a score of 11-5. Phillippi and Wentzel also picked up individual wins in the loss.

The Panthers withdrew from the Keystone Classic Meet, citing their adherence to the department’s COVID-19 protocols. The quad meet would’ve pitted them against in-state rivals Penn, Penn State and host Temple. Pitt’s next scheduled meet — now its season opener — will be a tri-meet at the Fitzgerald Field House against LIU and Maryland on Jan. 16 at 2 p.m.