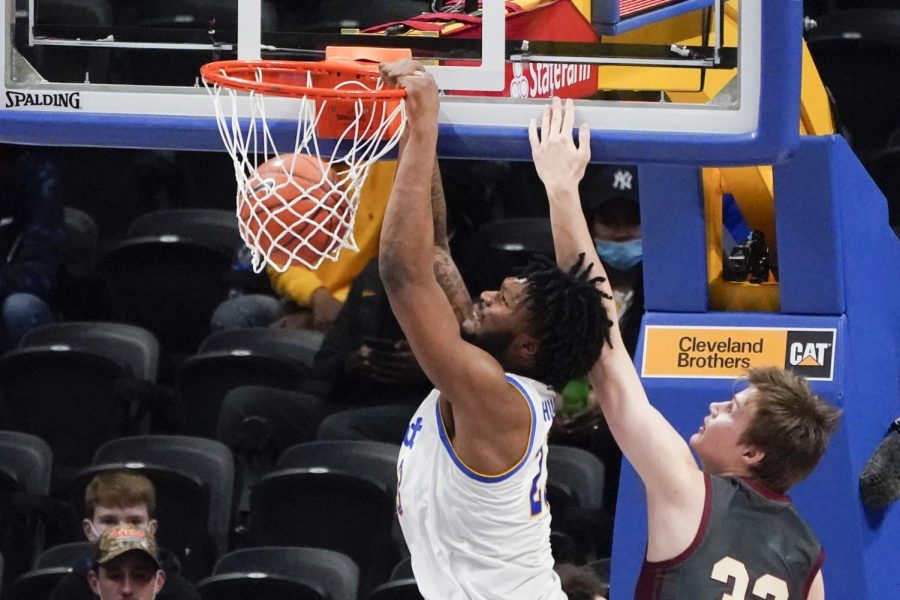 When Pitt men’s basketball lost to Monmouth a little less than a month ago, the sky was falling.

The Panthers were mired in a streak of six straight games decided by less than four points and lost five of them. Aside from the functional drawbacks of those losses — three of which came against conference opponents — they exacted a psychological toll. That many tight losses in such close succession demoralized fans, but hasn’t had the same effect on the players.

During those hard times, head coach Jeff Capel has told his team repeatedly to stay patient and trust that, if they follow his lead, a breakthrough will come. Now, the beginnings of a breakthrough are emerging and players are being rewarded for their persistence.

Time and health have allowed them to take the pressure off of young players who figure out where they fit into the best possible version of this team. It’s far from a guarantee that Pitt will make some kind of run through ACC play or the conference tournament, but the upward momentum is hard to ignore.

No ACC team is more than four games deep into their conference schedule. There’s still a lot of basketball to play and no one outside of No. 2 Duke — who appears vulnerable after a 76-74 loss at home Saturday night against unranked Miami — has separated themselves as elite. It’s a wide-open league and the Panthers are finding themselves at the right time.

But the fledgling turnaround hasn’t always been without its trials.

Pitt’s largest lead in an ACC game this season is eight points. It’s happened twice — on Dec. 28 against Notre Dame and last Saturday against Boston College. The Panthers earned those advantages both times in the second half — with 7:41 left against the Irish and 10:07 left against the Eagles — and both times Pitt’s opponents erased them before the game was over. They also lost on a miraculous, last-second shot to the Irish and missed eight of their last nine field goals in a 75-72 defeat last Tuesday at Louisville.

The Panthers struggled all season to put away what were sure or likely wins, but two recent data points show that they are beginning to buck that trend. Against both St. John’s and Boston College, Pitt played with uncommon poise to secure wins. Capel said he began to put an emphasis on performing in those clutch moments and, instead of folding like they had in the past, Pitt came out on top.

Before the St. John’s and Boston College wins, the Panthers had to be content with some moral victories, but their most recent success has been more tangible. The upward trajectory, which for so long materialized only in losing efforts, is now showing up on the scoreboard and box score.

Graduate transfer forward Mo Gueye got off to slow start this season, averaging just 5.4 points, 5.9 rebounds, 1.3 blocks and 2.0 turnovers while shooting 40% from the floor and 31% from 3-point distance over the first eight games. But he has looked as of late more like the well-rounded player that stood out in practice and scrimmages during the preseason.

Beginning with a breakout game in his native Big Apple on Dec. 18 against St. John’s, the rangy, thin, 6-foot-10 stretch forward has been one of the biggest contributors to Pitt’s recent, albeit modest, upward trend. Over his last three contests against the Johnnies, Jacksonville, Notre Dame, Louisville and Boston College, Gueye is averaging 13 points per game on shooting splits of 49% from the field, 46% on 3-pointers and 82% on foul shots in addition to 5.8 rebounds, 2 assists and 2.4 blocks per game.

Gueye has been Pitt’s most consistent player during this stretch, but it’s taken contributions from up and down the roster to breathe some life into this season.

Sophomore forward John Hugley continues to play like a force of nature, with his latest performance — a 32-point, 13-rebound domination of Boston College’s front court — was the best of his college career to date. Senior guard Jamarius Burton has built a reputation for delivering in clutch moments and is a vastly improved shooter, particularly from 3-point distance.

Gueye, Hugley and Burton’s scoring abilities helped relieve some of the pressure on sophomores Femi Odukale, Will Jeffress and Noah Collier, who can now feel more comfortable defending, rebounding and playmaking without pressing for points. That trio has contributed in a major way with timely plays, particularly towards the close of games.

This season has played out in a different manner than past years in which Capel has been at the helm. Instead of faltering from an encouraging start, the Panthers have gotten better during conference play. This season, which seemed like a lost cause in November, is now suddenly chock-full of potential.