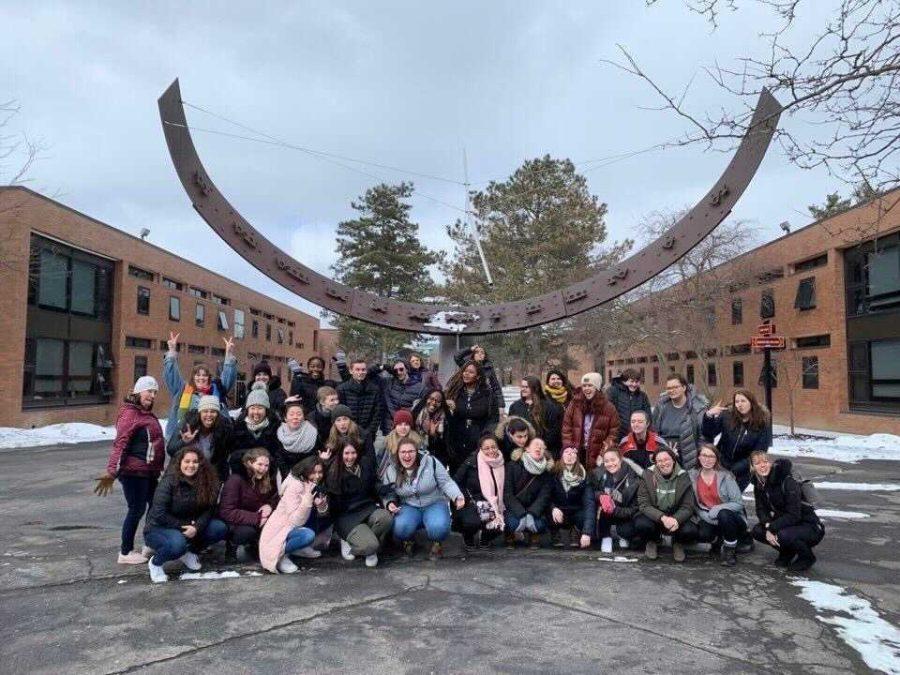 With nearly 28 million Americans experiencing some degree of hearing loss, Pitt provides students with resources — such as live captioning or ASL interpreting — for a better experience in classrooms and other settings.

Leigh Culley, the director of Pitt’s Office of Disability Resources and Services, said after approving a student’s accommodations, Pitt can assign an interpreter for the student to allow them to fully participate in their studies and other activities.

“For students with approved accommodations, we can assign an ASL interpreter to their class to ensure students have access to the lecture content, allowing them to participate fully in the course,” Culley said.

For students who wish to receive ASL accommodations, online request forms can start the process, or the student can contact DRS directly. DRS will then perform an eligibility review for receiving accommodations in classrooms and public events such as conferences, guest lectures, specialized performances, recognition ceremonies, staff meetings, celebrations, prospective student interviews and employment. Three students utilized these services during the fall semester, according to Culley.

Culley said Pitt partners with outside contractors, including a local community agency, who are all nationally certified interpreters. She also said she was not expecting to see ASL interpreters learn course materials to better assist the student for whom they are interpreting.

“Our interpreters can bridge the communication barrier between hearing and deaf persons by conveying the purpose, thought and spirit of the message,” Culley said, “In order to be prepared for classes or events, interpreters spend time preparing for their assignments by studying textbooks or reviewing other course materials.”

Culley said the University’s accommodations are crucial to inviting an effective learning environment for everyone.

“Providing this type of accommodation is part of the University’s commitment to creating an accessible environment where everyone can be successful and feel welcome and included,” Culley said. “It’s also required by [the] Americans with Disabilities Act of 1990, which prohibits individuals with a disability from being excluded from participation or denied services because of their disability.”

Students learning ASL, like Amara Novotny, the vice president of Pitt’s ASL club, especially benefit from interacting with and learning from the deaf community. Novotny said they had a great experience when the club visited the National Technical Institute for the Deaf in New York.

“During the trip, we went on a tour of campus and learned a lot about the school,” Novotny, a senior rehabilitation sciences and studio arts major, said. “Overall, I really enjoyed the trip and having the opportunity to be immersed in the deaf community and culture.”

Isabel Gessner, the outreach coordinator for Pitt’s ASL club, said she found more open opportunities in communicating with the ASL community which allowed her to create memorable experiences, like being able to interact with a larger group of people.

“ASL means that I am able to talk with a whole group of people that I wouldn’t be able to communicate with otherwise,” Gessner, a sophomore communication sciences and disorders major, said. “Learning ASL means that I become aware of and possibly immersed in an entirely different culture that people who don’t learn ASL are not aware of.”

When Pitt students interact with students who have interpreters, Gessner said it’s important to respect the student by approaching them and not their interpreter.

Even though ASL is becoming an increasingly popular language to study, there are misconceptions about the language, according to Rijul Amin, the president of Pitt’s ASL club. Instead of a universal sign language, Amin said there are many different variations, similar to spoken languages.

“There are many misconceptions surrounding sign languages. One of the biggest is that sign language is universal,” Amin, a senior biology major, said. “However, different countries use different sign languages, and deaf signers from the U.S., England and Australia wouldn’t be able to understand each other.”

Gessner said more people should learn ASL not only because it’s a less commonly taught language, but it also opens more opportunities to emerge into a new culture and make meaningful connections.

“More people should learn ASL because it is the gateway to a beautiful community as well as a whole new range of people,” Gessner said, “It opens up a whole new culture that is within the hearing community. You simply just have to look to find it.”