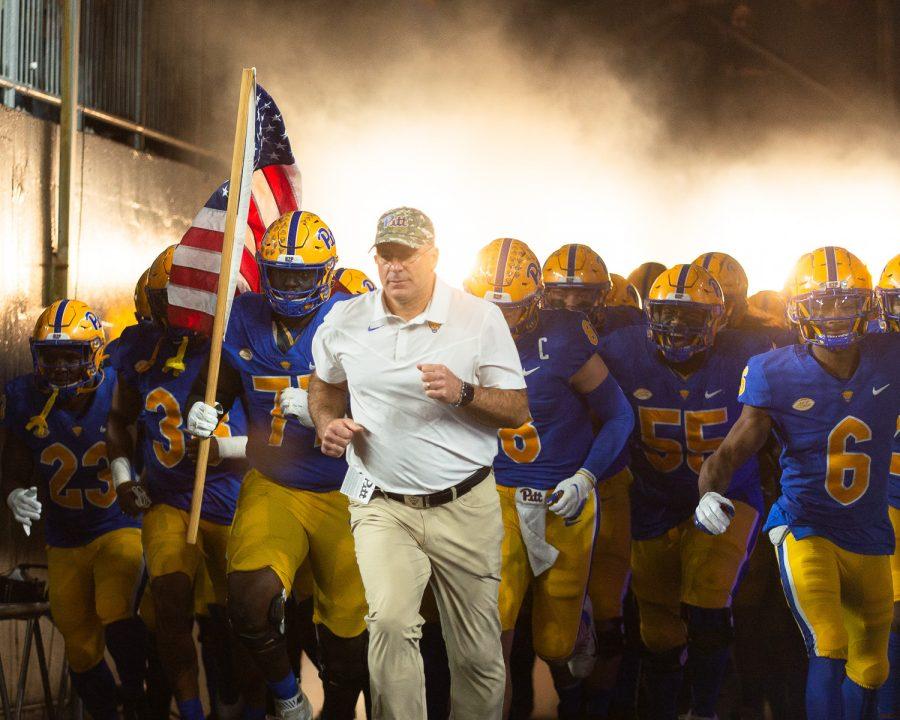 Head football coach Pat Narduzzi and the team run out of the tunnel ahead of Pitt’s football game vs. UNC on Nov. 11.

The 2021 Pitt football season was magical and one that players and fans alike will never forget.

Even a devastating 31-21 loss to Michigan State in the Peach Bowl doesn’t take away from the Panthers’ historic season.

Fifth-year senior quarterback Kenny Pickett said before returning for a final season that he came back to win a championship — and he and the Panthers did just that. But the 2021 season left an impact on the program that could shape it for years to come.

The effects of the Panthers’ 11-win, ACC Championship season isn’t just making waves  regionally, but across the college football landscape. With Pickett opting to forego entering the NFL Draft following last season for one more year, it’s increasingly likely that other quarterbacks across the nation will follow suit in hopes of improving their draft stock.

The Panthers’ best season in 40 years has opened a window of success to build on. Given the era of the transfer portal, Pitt knew it had the chance to continue to build on this season through adding to the roster externally.

Among quarterbacks in the portal, Pitt head coach Pat Narduzzi had former USC Trojan Kedon Slovis atop of his wish list. Luckily for Narduzzi, the feeling was mutual, as Slovis announced his intentions to transfer to Pitt in December.

“We were looking for the best available,” Narduzzi said. “And we were able to get our No. 1 guy.”

Slovis cited the culture that Narduzzi built at Pitt as one of the main reasons he signed to Pitt.

“The culture and identity that Coach Narduzzi has created is everything I want to be a part of,” Slovis said.

The tightknit culture that Narduzzi and his staff have built has always been apparent. The Panthers are typically among the lowest in the FBS in terms of players transferring out of the program. Pickett said before the season that the bond between him and his teammates was like none other.

“This is the tightest team I’ve been on,” Pickett said.

When the entirety of the starting offensive line decided they would return for another season, it came as a shock to outsiders. But clearly this decision stemmed from the love they have for one another — and the fact that there’s unfinished business in 2022.

When fans look back on this season, Pickett’s many accomplishments will likely be the first thought, but there’s plenty of memories to hold onto for years to come.

These, and many more moments, encapsulated the 2021 season. But the biggest takeaway is that it has laid the foundation for something bigger. With Slovis in the fold already, Panther fans’ expectations for 2022 are already high. Slovis mentioned his excitement to throw to Addison in his letter in The Players Tribune.

“Getting to throw the ball to the guy who just won the Biletnikoff??” Slovis said. “That’s something you don’t pass up.”

After first-year All-American Konata Mumpfield committed to Pitt this past Sunday, it’s reasonable to believe the sky’s the limit. The Panthers wide receiver room is arguably the best in the country on paper after hauling in The Athletic’s No. 7 player in the entire transfer portal.

Many speculated that Whipple’s potential replacement was already on the staff in 2021 receivers coach Brennan Marion. Marion elevated the Panthers from having the most drops in the entire country in 2020 to one of the most prolific groups in the country. But Marion left to coach Texas’ wide receivers after the Peach Bowl.

“When you have good coaches, people come after them,” Narduzzi said.

It’s true — this sort of thing comes with success in college football. It’s a testament to the culture Narduzzi has built and the success the program had last season that guys are buying in and trusting him before he makes a hire at those positions on the staff.

“It takes years to get where we got,” Narduzzi said. “Now we are gonna try to repeat. We are just building upon it.”

The Panthers’ dream season will never be forgotten, and is already proving as a launchpad to continued success with marquee transfers into the program for the upcoming season. The 2022 team is looking to prove that it wasn’t just a fluke, but that Pitt is here to stay.