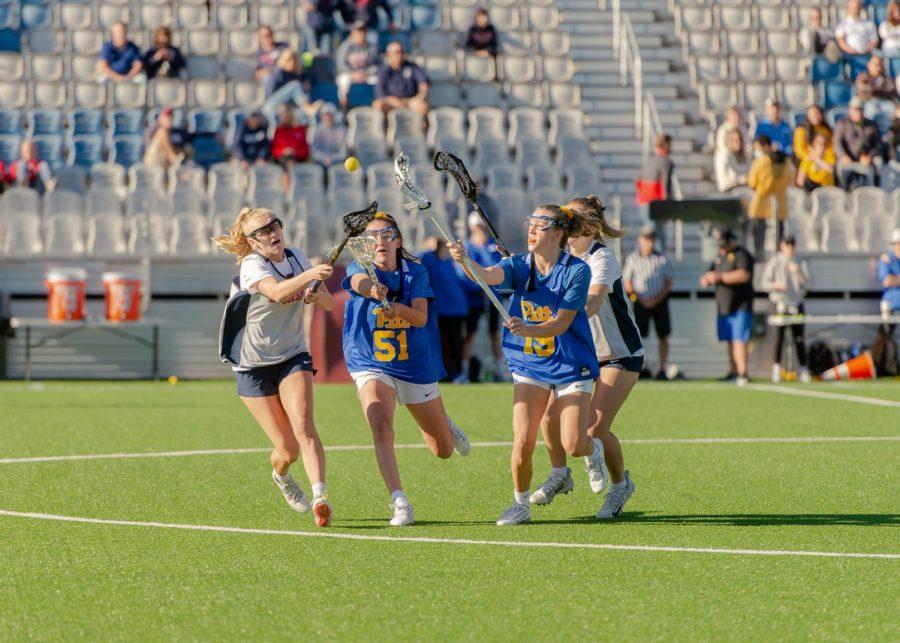 Pitt lacrosse players Dylana Williams (51) and Talia Zuco (19) fight for the ball during the team’s September playday against Duquesne at Highmark Stadium.

With the spring season looming, Pitt’s youngest varsity team is preparing for its inaugural season. Panthers women’s lacrosse is aiming for early success in one of the deepest conferences in the NCAA.

Women’s lacrosse is the newest varsity sport in Oakland, and the first addition to Pitt athletics since softball in 1997. While the program has been in operation since 2019, official Division I play doesn’t begin until Feb. 11, when the Panthers take on Duquesne. Their first schedule, revealed Jan. 5, featured several challenging matchups including home games vs. North Carolina and Boston College, as well as road games at Duke, Notre Dame and Syracuse. Those five, all fellow ACC teams, were ranked within the top 13 of the top-25 rankings at the end of the 2021 season.

The first Pitt roster consists of 38 players, 23 of whom are underclassmen, including 16 first years.

Without returning players to rely on, others will have to step up. But graduate students Therese Pitman and Allyson Trice, and senior Carlie Leach, have already become early leaders for the youthful Panthers.

Pitman, a sixth-year student from Syracuse, New York, began her collegiate career at Binghamton College and Siena College. She decided in 2020 to come to Pitt to finish her career.

“Last fall there were 14 players on the team,” Pitman said. “We had to set the foundation from the beginning.”

Part of building that foundation required attracting and recruiting other players. Leach and Trice both joined the program in January 2021. Trice played four years at Syracuse before transferring to Pitt for her fifth year. Head coach Emily Boissonneault played a big part in that decision.

“Coach Emily made me feel comfortable,” Trice said. “She stands for everything I value in lacrosse. She sets the standard for teamwork and comradery.”

Pitt hired Boissonneault when the University announced the program’s creation. Prior to accepting the top Pitt job, Boissonneault played at Detroit Mercy. There she earned team most valuable player honors in 2012 and made multiple ALL-NLC first teams. After graduating, Boissonneault became an assistant coach at James Madison. Boissonneault was part of a JMU staff in 2018 that went on to win the NCAA Championship.

Pitt players believe their coach has all the qualities necessary to build this program from the ground up.

“Emily is a fearless, compassionate and competitive leader,” Leach said. “She makes sure everyone gets better every rep.”

Leach added that joining a new program has been exciting. Team building and the fact that she’d be one of the original players in a new program made Pitt attractive to her.

“Part of the fun of a new program is setting the foundation,” Leach said. “It’s the first year so we get to set all of the traditions.”

Leach, Trice and Pitman will all be team captains in 2022. Boissonneault’s specialty is defense, and she’ll have the help of Pitman and Trice in her defensive unit. Leach, on the other hand, is an attacker and will lead the Panthers’ offensive unit. She played at the University of Oregon before transferring to Pitt, where she scored 24 goals in 21 games.

The three captains all had a similar team goal for 2022 — finishing over .500. In a deep and talented conference like the ACC, this is a lofty goal. But Trice also said this year’s win-loss record is secondary to laying a foundation for future success.

“I just want to have an impact on this team,” Trice said. “And set a reputation for Pitt women’s lacrosse that inspires young girls to want to come here.”

For Pitman, success off the field is just as important as having success on the field. During the 2020-21 academic year, women’s lacrosse led Pitt athletics in community service and team GPA. To Pitman, continuing this is another goal for 2022.

“We want to be community service champions,” Pitman said. “For us that means going out of our way to benefit the community of Pittsburgh.”

For the three captains, this will be their final season of collegiate lacrosse. They want to go out with a bang.

The Panthers have other players who are primed for big seasons as well. Graduate students Paige Petty and Molly Carter bolster an experienced Panther attack unit. Carter, a transfer from Syracuse, had 15 goals and 15 assists in 2018 as a first-year player. Petty comes from Virginia Tech, where she is the all-time goal and point scorer.

Boissonneault got her players to buy into the program. While playing the ACC presents a tough challenge for any coach, her players believe that they are ready to succeed.

Regardless of how the wins and losses shake out, this will be a landmark season for Pitt women’s lacrosse. When asked how it felt to be a part of this season, Pitman said she was grateful to get in on the ground floor of something that will last long after she’s gone.

“[I’m] grateful,” Pitman said. “To be able to start something from the ground is very historical and something I’m proud to be a part of. Knowing that we’re laying the groundwork for generations of women to come is something I’ll cherish forever.”

But Pitt isn’t just happy to be here. The team knows that no opponent will cut it any slack for being new, and it won’t give itself any either. The Panthers want to make a name for themselves now.

“Pittsburgh means business,” Pitman said. “We are not just any new program. We are here to stay and to make noise in the ACC.”