Preview | Pitt gears up to take on No. 6 Sun Devils 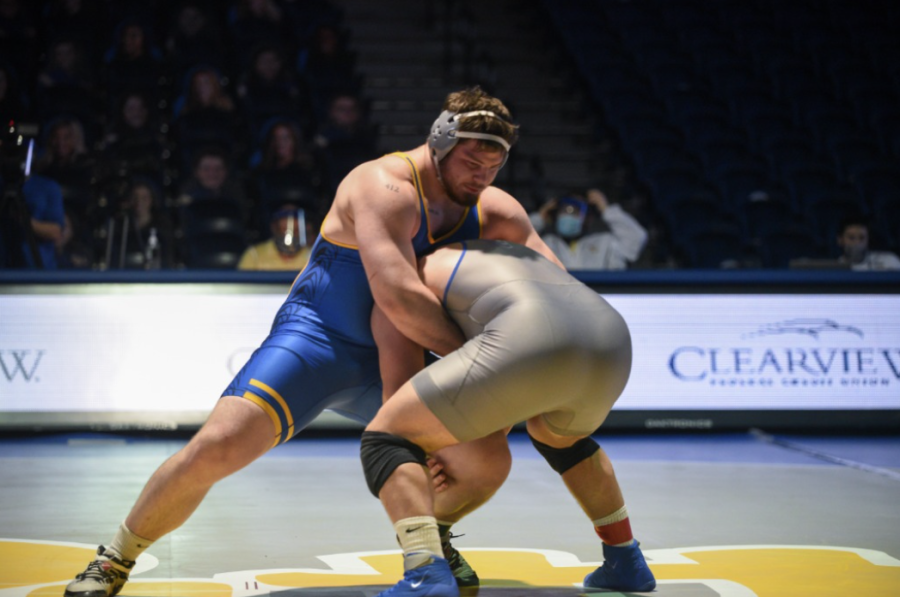 Pitt junior wrestler Jake Slinger faces off against a Duke University wrestler at the Fitzgerald Field House on Jan. 16, 2021.

After an up and down 4-3 start to the season, the Pitt wrestling team will face off against the No. 6 Arizona State Sun Devils (3-1, 0-0 PAC-12) on Friday night at the Fitzgerald Field House. The meet will be the Panther’s third straight match at home. Here’s what to look for when the Sun Devils come to Pittsburgh on Friday night.

Panthers look to get back on track ahead of ACC slate

Leading up to their bout with the Sun Devils, the Panthers failed to meet many fans’ expectations this season. The team suffered three blowout losses to ranked opponents, including Lehigh trouncing the Panthers 26-9.

But not all has gone wrong for the Panthers. The team won the Illinois Matmen Open in late December, placing ahead of several strong teams including Penn and Wisconsin. Additionally, the team boasts six nationally ranked wrestlers in the lineup for Friday.

Moving forward, the Panthers will look to gain momentum against the Sun Devils before competing against a tough string of ACC opponents, including No. 5 NC State and No. 12 Virginia Tech.

Arizona State currently stands at 3-1, with its only loss coming to No. 2 Penn State. Two of those wins are against ranked opponents. The Sun Devils took down No. 17 Oklahoma 22-12 as well as No. 7 Virginia Tech 23-13.

On top of a near-perfect record, the Sun Devils will also bring seven ranked wrestlers to Friday’s lineup. Key wrestlers for Arizona State include No. 4 redshirt junior Brandon Courtney at 125 lb., No. 3 redshirt sophomore Jacori Teemer at 157 lb. and No. 3 redshirt first-year Cohlton Schultz at HWT.

The meet will start with three straight key matches for the Panthers. Leading off, No. 4 Courtney will take on No. 32 redshirt senior Gage Curry to kick off action at 125 lb. This bout is extremely important for the match, as each team will look to set the tempo.

Next up at 133 lb., Pitt’s No. 7 redshirt senior Micky Phillippi will face off against Arizona State’s No. 4 redshirt junior Michael McGee. Both wrestlers boast impressive resumés — each qualified for the NCAA tournament three times.

To wrap up the three straight critical bouts, Pitt’s No. 22 redshirt junior Cole Matthews will likely face off against redshirt first year Julian Chlebove at 141 lb. Matthews recently upset No. 3 Stevan Micic of Michigan in a thrilling 11-5 decision. While the rankings favor Matthews, he will need to tread carefully against an upset-minded Chlebove.

Later in the meet, No. 13 redshirt senior Jake Wentzel of Pitt will take on No. 6 redshirt senior Anthony Valencia of Arizona State at 165 lb. Both wrestlers earned All-American status at the NCAA tournament last season.

At 197 lb., No. 9 redshirt senior Nino Bonaccorsi of Pitt will look to take down No. 10 redshirt junior Kordell Norfleet of Arizona State. Bonaccorsi nearly won a national title, falling just short behind AJ Ferrari of Oklahoma State. On the other hand, Norfleet comes into this match as a three time PAC-12 champion, as well as a 2021 All-American. Expect a close match, as both wrestlers are similarly ranked.

Arizona State overpowers Pitt with its sheer number of highly ranked wrestlers. The Sun Devils continue to prove themselves as one of the best dual teams in the country, having already defeated teams with similar rankings as the Panthers.

The match may turn sour for Panthers early, as top ranked Sun Devils such as Courtney and McGee look to earn bonus points for their team. Later match-ups, such the bout at HWT, may also equate to bonus points for Arizona State.

The Panthers will show glimpses of hope, as they have done in previous matches. Matthews and Bonaccorsi may be able to pull off close victories, but Pitt will lack the firepower needed to defeat the Sun Devils.

The Panthers continue to look more like an individual tournament team, as they struggle competing against top ranked opponents in dual meets. But this will play into their favor once the NCAA Tournament draws closer.

The Match will start at 7 p.m. on Friday night at the Fitzgerald Field House and will air on ACCNX.