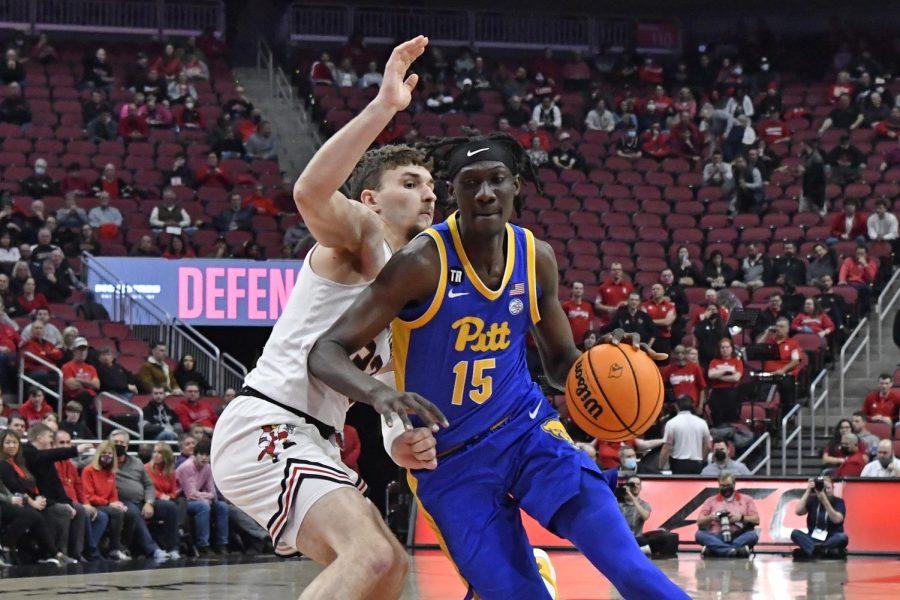 Throughout spring and summer 2021, Pitt men’s basketball head coach Jeff Capel was tasked with rebuilding much of his roster. After losing the previous season’s top three scorers, Capel turned to the high school and junior college levels plus the transfer portal in search of new talent.

Graduate student forward Mouhamadou Gueye was the final addition to the 2021-22 roster, and the Stony Brook transfer immediately emerged as one of Pitt’s premier players. When the program announced Gueye’s addition to the roster, Capel praised his defensive ability, and presence around the rim on both ends.

“We love his competitiveness and ability to play above the rim on both ends of the floor,” Capel said. “He gives us another versatile, experienced forward who can help impact winning.”

Gueye’s defensive ability appeared to be his calling card, and rightfully so. He earned America East Defensive Player of the Year honors in 2020-21, and brought an imposing interior presence to a Pitt team in desperate need of size.

Gueye provided just that early in the season –– his main contributions came from blocked shots and rebounds, with scoring fluctuating from game to game. He flashed the ability to face up defenders and score off the dribble, but was not a focal point.

Gueye dealt with a personal matter early in the season, and struggled to get in a rhythm for a few games due to his brief time away from the team. To try and get back in rhythm, Gueye narrowed how he viewed his role and tried to focus on doing anything necessary for his team to win games.

“The biggest thing was trying to stay focused and play my part to help the team win,” Gueye said. “Whether that’s me starting, me coming off the bench, me having 14, me having two points. Just doing whatever I can to help our team get the win. I feel like that’s the mentality of a lot of people on our team, and just the theme of our team.”

While it took him three games to find his stride, Gueye finally broke through and made four of his eight 3-point attempts against UMBC on Nov. 27. Despite this flash of shooting ability, Gueye’s volume did not increase consistently in the immediate aftermath. After the Jacksonville game a few weeks later, Capel still viewed Gueye as inconsistent as a shooter, and valued the other aspects of his game.

“He’ll make a three, hopefully he’ll make more, but that’s something that he’s inconsistent with,” Capel said. “But the things that he can do, he can block shots. He can be active defensively, he can drive, especially when he has bigger guys on him.”

That role has evolved over the past month of the season, and Gueye proved to be far more than an interior player. Gueye attempted at least three shots from beyond the arc in each of his last seven games, and is shooting 35.8 percent from 3-point range on the season.

While Gueye’s emergence as one of the most consistent and efficient shooters on the team is a recent development, it is something that he expected of himself since the day he decided to come to Pitt.

Gueye’s offensive success has been accompanied by a visible increase in energy and confidence. He cited an improved willingness to play through contact as one of the main reasons for this uptick in production.

“Just embracing the physicality, playing with more of a motor, I think that’s the biggest thing,” Gueye said. “I’ve been playing with high energy, feeding off of the energy of these guys trusting me with the ball, and I trust in my work. I work on this stuff every single day, so it’s just going out there and doing it.”

Since Pitt’s emotional December win over Saint John’s, Gueye is averaging 12.7 points, 7.4 rebounds and 2.3 blocks per game, shooting 45.1% from the field and 39.4% from 3-point range while playing 35.1 minutes per contest. For Gueye, those impressive numbers are no oddity. Rather, it is the standard he holds himself to.

“I’ve been expecting this of myself, that’s part of the reason I chose to come here and play at this level, because I always knew that I could,” Gueye said. “But now to see it really clicking and rolling together, it’s become something I’m expecting to go and do every game.”

Gueye’s ability to knock down 3-point shots and create offense for himself and others with spacing and dribble penetration has been essential to Pitt’s recent improvements as a team. But as senior guard Jamarius Burton highlighted after Pitt’s recent win over Louisville, Gueye still anchors the Panther defense.

“I told Mo he’s gotta be that eraser for us,” Burton said. “When people make mistakes, he’s gotta come in and erase. I feel like he did that today, and I am so proud of him.”

Beyond his statistical success, Gueye’s energy and leadership is contagious, and Capel noted that the team simply has a different, improved feel when Gueye is leading the way with his energy and physicality.

“When he’s talking and he’s active, it just gives us a different look,” Capel said. “And that’s the main thing we need from him. So it’s been really good to see him start to play with a little more force.”

Gueye was always seen as a good, but one-dimensional player. Now, he has rapidly evolved into an extremely versatile, do-it-all forward on both ends of the floor for Pitt. He has embraced his new role, and expects himself to continue impacting games like he has over the past month, during which the Panthers have looked like a brand new team.