Ezeakudo rewarded for impact on Pitt basketball with scholarship 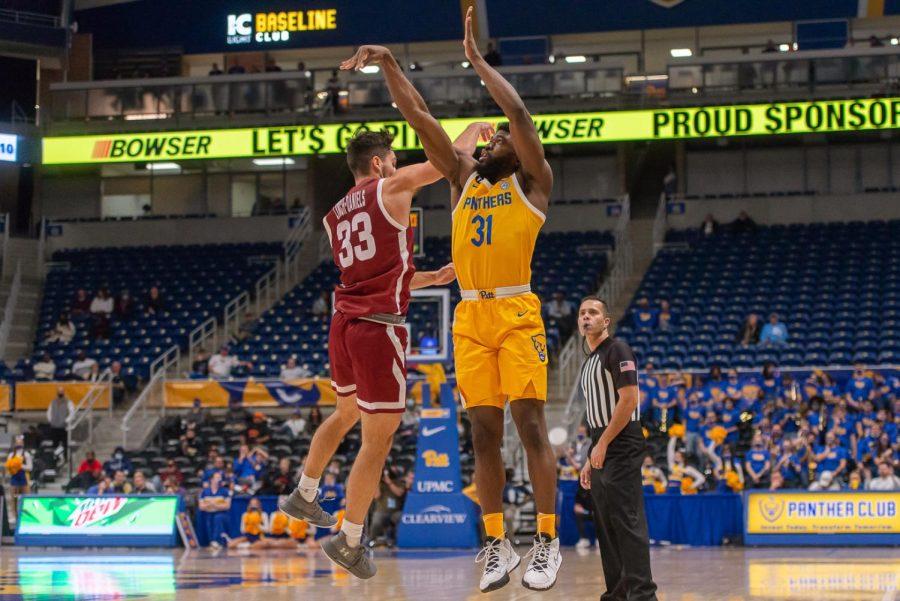 There are a few ways for a walk-on to endear themselves to a college basketball team and its fan base. The most common route is to serve as a kind of comic relief, someone that creates wild celebrations with other benchwarmers or maybe hits a shot to the delight of fans at the end of a blowout.

Another, much more difficult way is to slowly and painstakingly earn a role as a real contributor. That’s what senior guard Onyebuchi Ezeakudo chose. It took him three years to get to this point — where he is earning meaningful minutes — but it has proven to be time well-spent. Now Ezeakudo, the longest-tenured men’s basketball player at Pitt, is on scholarship and carving out a key role at the highest level of the sport.

In a 60-second video, posted Jan. 13 on the team’s Instagram and Twitter, Ezeakudo called his mom to tell her that he earned a full scholarship after spending three and a half years as a walk-on. It is perhaps the crowning achievement of Ezeakudo’s long basketball career, which was done mostly behind the scenes.

No better feeling than making my people proud🖤 https://t.co/MXfYNvYVAJ

Coming out of high school, Ezeakudo attracted interest from nearby Division II and III schools. They were safer options, places where he’d be able to play right away. There was no guarantee that he’d make a Division I team, much less get any playing time or be put on scholarship.

In choosing Pitt, Ezeakudo knew that he was taking a risk. Other coaches tried to pull him away by casting doubt on his prospects of making a high-major basketball team.

“[The decision] was extremely difficult,” Ezeakudo said. “And I remember one specific conversation I had with this coach that really wanted me to come to his school. I remember when I told him that I was going to decline and try to walk on at Pitt, he told me that it was going to be a big mistake … and that things weren’t going to work out at Pitt.”

Ezeakudo spent the summer before arriving at Pitt working out, preparing to make his next move. His first contact with the program came in August, when Ezeakudo said he ran into assistant coach Tim O’Toole on campus. Ezeakudo explained his walk-on intentions to O’Toole, who told him that he was unsure whether or not there would even be open tryouts.

Still, O’Toole took Ezeakudo’s phone number and promised to keep in touch. Ezeakudo didn’t just wait to hear back. Instead, eager to get closer to the program in any capacity, Ezeakudo joined the women’s basketball team as a practice player.

In September, the coaching staff invited him to an open tryout, where Ezeakudo played well. O’Toole told Ezeakudo a few weeks later that he had made the team, but only as a practice player.

It wasn’t until winter break that Capel recalled him to campus so that Ezeakudo could join the team as a full-time player.

Each time Ezeakudo reached a new career milestone and achieved new heights that previously didn’t seem feasible, he found a new target, something even more difficult than the formerly impossible task he had just conquered.

“I think my biggest goal was to be a contributor to the team,” Ezeakudo said. “I feel like once I get to a goal, I think, ‘What’s next?’ I never really get to enjoy it. Once I got on the team as a practice player, it was like, ‘Alright, how can I fully get on the team?’ Then, ‘How can I get in the game, get more minutes?’”

When he finally earned his spot on the team, Ezeakudo said he didn’t think about how to get a scholarship, despite the constant questions from friends about when he would. After three years, the interest in his status with the team became a constant reminder that being a walk-on comes with baggage. His roster spot, the one he had risked so much to earn, was saddled with the implication that he was somehow a lesser part of the whole.

Fighting that narrative in his head and in real life took patience and persistence, according to Ezeakudo. He forced himself to be tougher to prove that he belonged.

“It’s not easy,” Ezeakudo said. “The biggest thing is that you have to be tough. You’re working as hard as everyone else, but not getting any recognition. … A lot of times, I felt like it was really easy to just say, ‘forget it.’ … By the time you’re in year three, it gets kind of old. But having the mental toughness to show up everyday and work just as hard is important.”

As he’s proved this season, Ezeakudo can more than hold his own in Division I high-major basketball. Injuries and suspensions decimated Pitt’s backcourt depth early this season, and Ezeakudo stepped in to fill in those gaps. Senior guard Nike Sibande and junior guard Ithiel Horton remain sidelined, and even with senior guard Jamarius Burton cemented in his starting role, Ezeakudo is an important part of the rotation.

Lineups that include Ezeakudo, Burton and sophomore guard Femi Odukale have been some of the most productive for Pitt. This season, lineups that feature all three own a net rating of +19.9 in 122 minutes on the floor together. After beating Louisville last Saturday, head coach Jeff Capel said he noticed how well those three play together.

“It’s been good for us all year,” Capel said. “If you look at the plus-minus numbers when we’ve had three guards in … it’s been very positive for us. … It gives us three ball-handlers, three guys that we can play off of ball screens.”

Capel went on to note how Ezeakudo’s shooting and defense supported the three guard lineups well.

Almost two-thirds of the way through his senior season, Ezeakudo has already shattered some personal statistical records. This season, he is shooting, scoring, rebounding, assisting and simply playing more than he ever has in his college career.

A reputation for irritating opponents with his relentless defense and hitting big shots has blossomed among teammates. Both sophomore forward John Hugley and Burton even went as far as to compare Ezeakudo to 10-year NBA veteran and three-time All-Defensive team member Patrick Beverley, a notoriously scrappy defender throughout professional basketball.

“I’m so proud of him,” Hugley said following a December game against St. John’s. “He’s been knocking down big shots, having to guard people full court. He’s not a pushover at all. He’s going to give you hell every night.”

Amid all of his recent success in the realm of basketball, Ezeakudo is a biomedical engineering major and has a big decision approaching on the horizon. He can either utilize his so-called “COVID year” to play one last season of college basketball, or graduate and begin scaling a new mountain — medical school and the pursuit of a career in orthopedic surgery.

Even his ambition has its limits. Ezeakudo said he opted to focus mostly on this season and worry about the future later. It took him so long to get to this point, and he wants to savor this moment for a little longer.

“I’m not sure what I want to do after this season,” Ezeakudo said. “But it’s something I’ll start thinking about in a few months.”