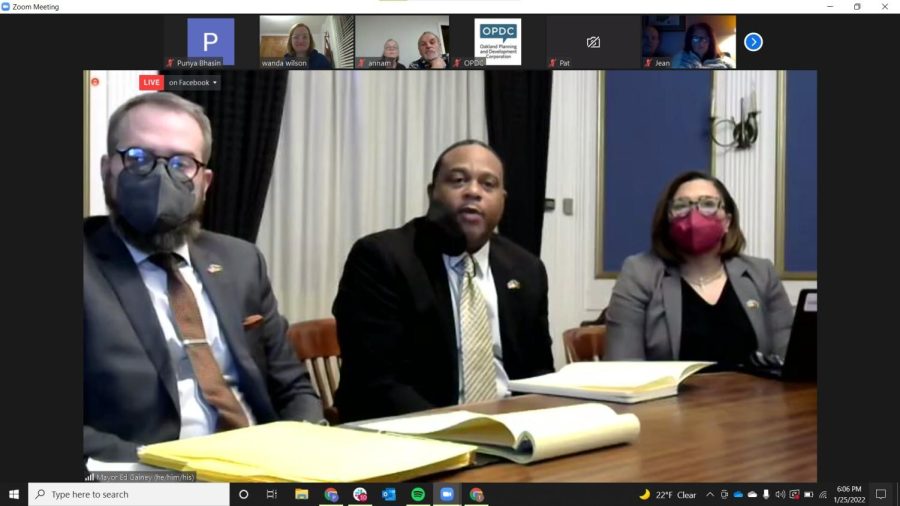 Former Mayor Bill Peduto introduced the zoning legislation which would enable the plan, and the City Council voted in October to advance an amended proposal to the City Planning Commission. Many community members, including OPDC, denounced the proposal, arguing that Walnut Capital did not properly seek community input or consider the community’s needs.

“We do have a big concern about inclusionary zoning and equitable development in our community and there’s no point for affordable housing in the point system that’s included in the zoning legislation, nor is it subject to inclusionary zoning, so we’d really miss the opportunity to have resources for equitable development and our community,” Wilson said.

Wilson then opened the meeting to the audience.

Jeff Parker, an Oakland resident who is disabled, said it is important the project team considers accessibility. One part of Walnut Capital’s presentation for the project said “accessibility and safety should be prioritized for all public realm elements including sidewalks, trails, parking lots and streets.”

“I’m a disabled person and when you talk about things being inclusionary and things being equitable, I think you also have to think about accessibility,” Parker said. “When I read the proposal, the purpose of the project very clearly makes points about establishing safe and attractive pedestrian, bicycle and transportation improvements, as well as creating consistency of scale, size and design of buildings.”

Elena Zaitsoff, the vice president of the Oakcliffe Community Organization, said she supports the idea of affordable housing and thinks it is important to consider that students living on McKee Place and Halket Street would likely be displaced along with future students looking for housing.

Zaitsoff also said the Oakcliffe Community Organization has taken a formal position against the closing of Zulema Street, which is included in the plan.

Pitt student Connor Scanlon was also in attendance at the meeting, and said he believes Walnut Capital’s plan will bring “great things to Oakland.”

Scanlon also said housing needs to be expanded to accommodate both students and Oakland residents.

“I think that the way that the neighborhood is architected right now is pretty limiting because we have a bunch of single-family homes and it is limiting in the size in which we can grow and bring more people to Oakland,” Scanlon said. “I think that we’re going to always have students that are living in housing in Central Oakland, and they continue to encroach into South Oakland and I think it’s good that we have students, but we can attract new people, with just students being here and we can continue to have current residents continue to live here by expanding housing.”

Gainey didn’t speak much during the meeting, but he expressed his appreciation for people coming to share their concerns and suggested people attend a community listening session he is hosting next Wednesday night.

“I want to thank everybody who came out today, we’ve listened to all the concerns and I think it’s important that we are here,” Gainey said. “We have a public meeting coming up and we’ll be here again so we can get to a point where we have got enough information.”

A previous version of this story referred to Gainey’s community listening session taking place next Tuesday night. It will happen Wednesday night. The article has been updated to reflect this change. The Pitt News regrets this error.