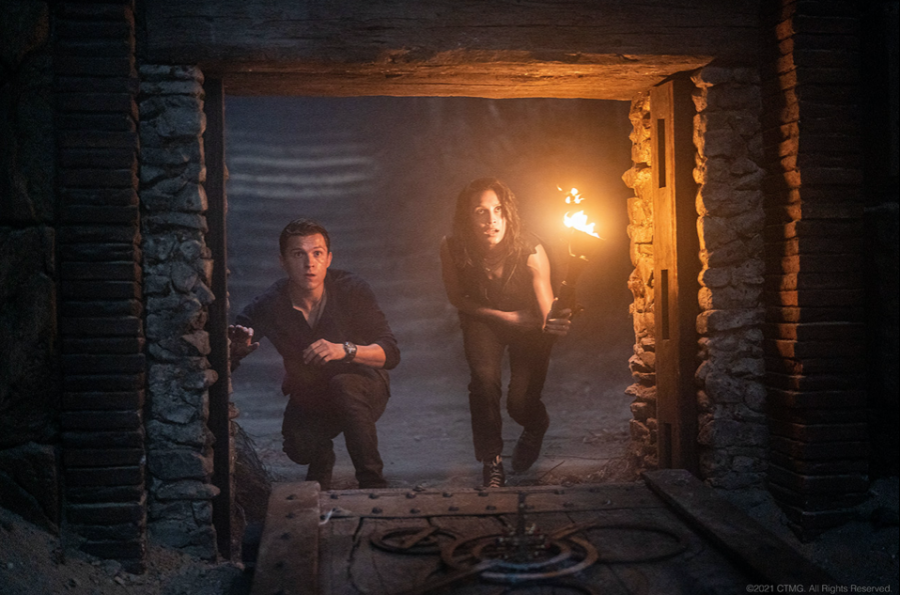 Even before the movie was announced, “Uncharted” seemed like the series that could break the trend of bad video game movies. After all, the “Uncharted” games are heavily inspired by the likes of “Indiana Jones,” and the “Indiana Jones” movies are great — well, roughly half of them are.

All the moviemakers had to do was reverse engineer a classic adventure movie from the games that were inspired by them. Fool-proof, right? Not, exactly.

“Uncharted,” which opened in theaters on Friday, begins right in an action sequence lifted almost directly from the games.

The sequence, where Nathan Drake (Tom Holland) climbs from a string of cargo containers hanging tentatively out of a jet, comes back into play a little over halfway into the film, and by that point, we haven’t learned anything meaningful that changes the way we see the scene. It is clear this is just an attempt by the movie to hook the audience with an exciting scene, which is understandable, given that there’s not much going on in the first act of the film.

In this scene, we cut directly from Nate falling from an airplane to a flashback of Nate’s childhood, which sets up several plot elements, more often than not through overly expository dialogue. Nate and his older brother, Sam (Rudy Pankow), break into a museum where they see a map of Ferdinand Magellan’s historic circumnavigation around the globe.

Magellan died before ever making it back home, but the film explains that his crew stashed away $4 billion worth of gold and hid it, setting up the treasure hunt that will serve as the movie’s primary motivation. When Sam tries to open the map’s case, he triggers an alarm. Sam and Nate get caught and the police take them to their orphanage where Sam, who they say has used up his last chance, runs away, promising to return one day.

When the movie finally begins proper about 15 years later, we are introduced to Nate, now a bartender, who awkwardly flirts with a woman who comes into the high-end restaurant he works at. Of course, Nate only does this to get close to her and swipe an expensive bracelet off of her wrist.

Leaving with his new loot, Nate is stopped by Victor Sullivan (Mark Wahlberg). “Sully” compliments Nate on his form, then asks if he’d like to join him on a “job.” Nate declines but, upon leaving, notices the bracelet he rightfully stole is gone. Nate skillfully tracks Sully down using the business card Sully gave him with his address on it.

In Sully’s apartment, Nate gets distracted by the same map of Magellan’s route, which Sully has presumably stolen himself. Sully, who all but says, “I was expecting you, Mr. Drake,” tells Nate that he and Sam, who’s been missing since the opening flashback, were trying to find the treasure when Sam disappeared.

Sully attempts to recruit Nate to help him find the treasure by offering him the chance to find his brother. Nate agrees after some hesitation, despite having absolutely no reason to trust Sully, setting the plot in motion.

Holland and Wahlberg have a generally fun rapport, but their relationship doesn’t grow, nor does it ever feel true to the original games. The film tries to assure us that the relationship between Nate and Sully is ever-evolving and nuanced by including situations where their dynamic should change, but it never really does.

Sully plays the older, experienced adventurer always ready to dish out some snark, and Nate is the inexperienced protégé who gives some right back. This is a tried and true dynamic, but “Uncharted” fails to execute it competently. The movie fails to show how the pair slowly gain trust and become friends. Their first interaction has the same energy as the last. It also fails to show that their friendship changes. Following a “shocking” revelation, Sully and Nate suffer a massive rift, but they just stay with the same back-and-forth witticisms.

The supporting cast generally does well with what they’re given. Fans of the games will appreciate the inclusion of Chloe Frazer (Sophia Ali). The movie provides a backstory for Nate and Chloe’s relationship, which the game never fully explored. Nate’s uncertainty and distrust of Chloe feels true to the games and the growth of their relationship feels natural. It actually helps inform the original games, something I wish the movie did more often.

Santiago Moncada (Antonio Banderas) and Braddock (Tati Gabrielle) are the main villains. Their motivations don’t extend much further than the pursuit of money, but they admirably perform their function as obstacles for Nate and Sully. Gabrielle has a lot of fun and colorful outfits for action sequences throughout the movie, though one specific fight between her and Wahlberg has an weirdly sexual undertone, which makes the scene’s violence very uncomfortable.

Some of the best adventure movies make it feel like the audience is solving the riddles right along with the main characters. “Indiana Jones,” “The Mummy” and even “National Treasure” do this well. “Uncharted” never gives this impression. Most of the time, not only is the answer withheld from the audience, the question is, too. The audience isn’t given enough information about the problem at hand to feel the sensation of solving the puzzle, before the curtain is pulled back to reveal the answer.

For fans of the games, there’s much to be disappointed about. The opening scene is really the only moment of direct adaptation in the whole movie, and the fact that the movie opens in medias res feels like a callback to the iconic cold open of “Uncharted 2.” The relationship between Nate and Sully is completely changed from how it’s shown in the games, and the movie outright changes elements of various characters’ backstories. But there are some elements included for those familiar with the source material. These range in enjoyment, from a silly but fun and nostalgic use of “Nate’s Theme,” a central musical motif in the games, as Nathan puts on a classic element of his costume, to a cringy Nolan North cameo that was appreciated but awkwardly executed.

The movie culminates in an action set piece that is creative in its utter stupidity. While the spectacle and sheer commitment to the idea is admirable, and admittedly, there are some very fun moments within this sequence, it doesn’t save the climax from feeling silly. This problem permeates the whole film.

The spectacle of “Uncharted” is undercut by its artificiality. The action sequences are so cartoonish, both in their heavy use of CGI and in the absurd physics on display, that the suspension of disbelief is broken. Overall, there simply aren’t enough character moments developed through these action scenes to make us care.

In a moment at the end of the movie, Sully must make a choice between saving Nate or a bagful of gold. This scene is telegraphed from a mile away and Sully’s choice is entirely expected. This scene is, in a way, a good metaphor for the whole movie — one that makes all of the safe choices without risking enough to give the audience something truly exciting.