Column | Pitt moments that made fans want to drink, in celebration or sadness 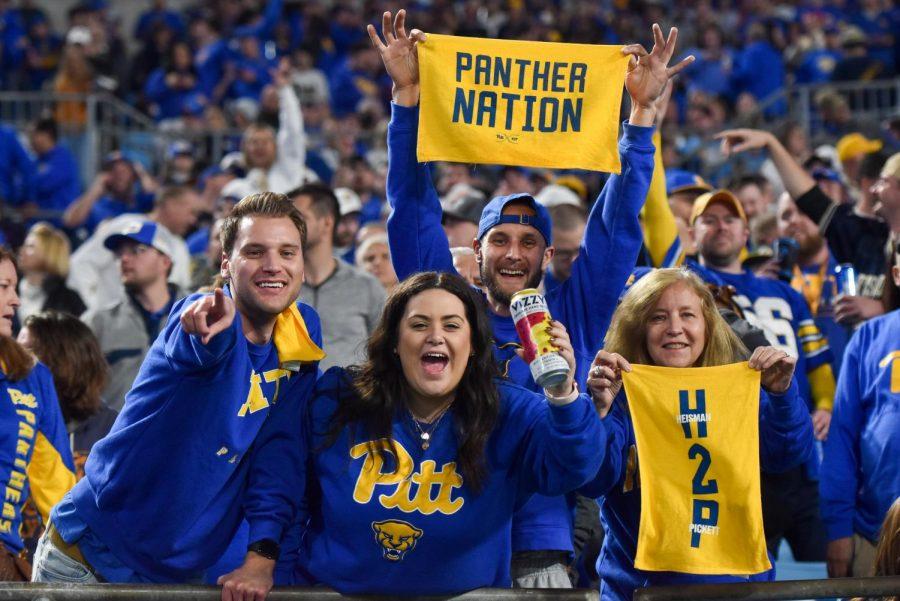 Pitt fans cheer and yell during the third quarter of the ACC Championship football game on Dec. 4, 2021.

Pitt fans have seen plenty of wins that called for celebration — and just as many heartbreaks, too. They’ve been driven to the bottle for different reasons, and here are some of the moments that made Pitt fans pop champagne in celebration and down dreadful shots in defeat.

Every Pitt fan will remember where they were when the Panthers won the 2021 ACC Championship. The game featured electrifying plays in all four quarters, culminating in Pitt football’s first ever conference championship. From quarterback Kenny Pickett’s controversial fake slide, to defensive back Erick Hallett’s fourth quarter pick six, the 2021 ACC championship is forever ingrained into the memory of all Pitt fans.

The celebration at Bank of America Stadium in Charlotte, North Carolina raged all night and chaos erupted in Oakland simultaneously. Pitt students flooded out onto Forbes Avenue, burning couches and marching down to Heinz Field in celebration.

Pitt fans hoped for a celebration coming into the 2011 Big East Basketball Tournament. The Panthers were one of America’s top teams for the entire regular season, and entered the tournament ranked No. 3 in the nation. But UConn guard Kemba Walker would ultimately squash Pitt fan’s hopes for a victory toast.

With just a few seconds remaining on the clock, Walker took the ball down court and sank an iconic, buzzer-beating dager to shock the Panthers. The loss set the Panthers spirling, as they eventually fell in the second round of the NCAA Tournament. Walker’s buzzer-beater is a buzzkill for Pitt fans everytime they see it.

The 100th edition of the Backyard Brawl between Pitt and rival West Virginia featured one of the most amazing upsets in college football history. The 4-7 Panthers went on the road against No. 2 West Virginia. Many analysts expected a West Virginia blowout win, as the Panthers were 28 1/2 point underdogs.

The Panther defense shut down West Virginia’s explosive starting quarterback Pat White, holding him and the Mountaineer offense to just one touchdown. Pitt ultimately won the fierce rivalry game 13-9, stunning the title-hopeful Mountaineers in their final regular season game. Pitt fans in Morgantown and Oakland partied hard in the aftermath and have since made the final score of 13-9 a simple but stinging insult directed at their rivals to the south.

Pitt fans had a lot to be excited about coming into this game. The Pitt faithful enjoyed a cold one after defeating preseason ACC championship favorite Clemson, Pickett vaulted into the running for the Heisman Trophy, and a playoff bid seemed feasible. But the following week, it seemed like the Panthers had had one too many.

The Miami offense dominated Pitt in the first half, scoring 31 points before intermission. The Panthers mounted a comeback in the second half, but fell just four points short. Pitt fans watched in horror as Pickett threw a game-sealing interception in the closing minutes of the fourth quarter. Oakland went silent as the sun set without the iconic Victory Lights over the Cathedral.

Pitt is it! The iconic Sports Illustrated cover perfectly encapsulated the 1976-77 Pitt football team. Older Pitt fans may fondly remember marking the accomplishments of the 1976 Panther team with a drink or three. The team went 11-0 in regular season play, led by Heisman Trophy winner running back Tony Dorsett. The Panthers then marched down to New Orleans for a matchup with the No. 5 Georgia Bulldogs in the Sugar Bowl.

Pitt ultimately prevailed in the game, trouncing the Bulldogs 27-3. This win clinched the national title for the Panthers.

2008 is yet another underdog story for Panther fans to toast. Pitt came into the tournament seeded No. 7 after struggling with Big East conference play all season. But undeterred and led by a tough, veteran lineup, the Panthers proceeded to win four straight games, culminating in a 74-65 win over Georgetown in the championship bout.

Pitt fans flooded bars around Madison Square Garden in the aftermath, reveling in the unlikely win. Little did they know that the Panthers would never win another conference tournament again.