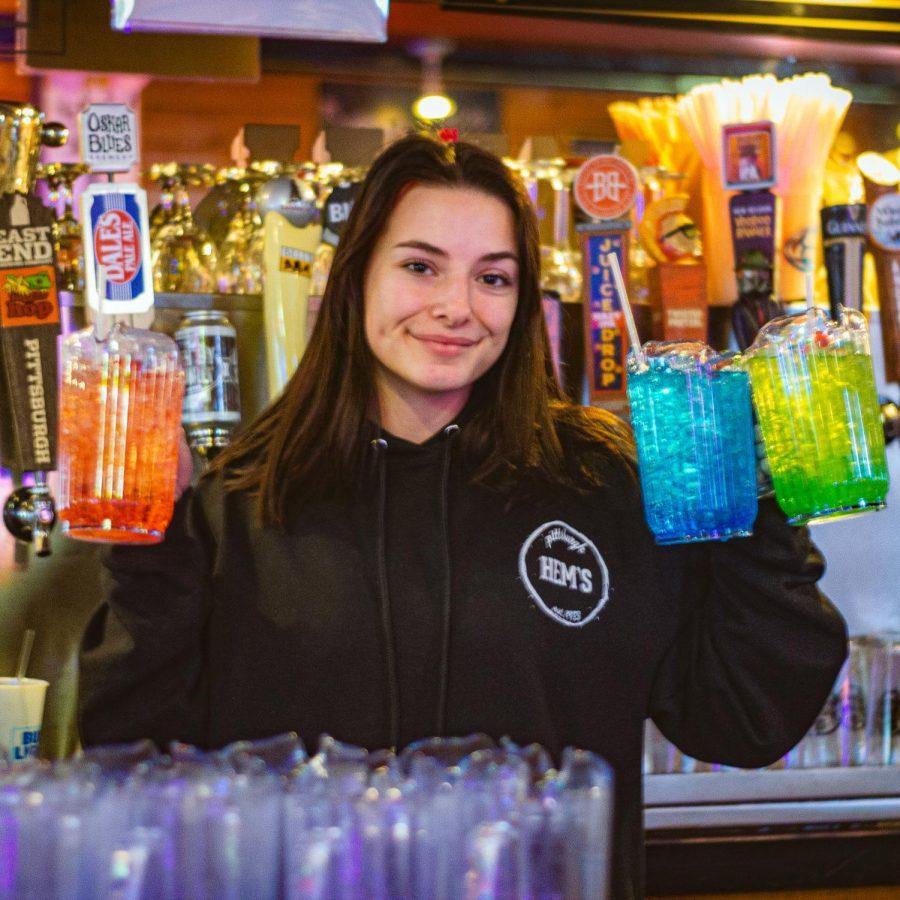 A bartender holds up drinks at Hemingway's Cafe.

Gene Ney, owner of the Oakland bar Gene’s Place, didn’t see any decrease in business when the Omicron variant drove up COVID-19 cases among Pitt students in January — in fact, he said he saw the opposite.

“In all honesty, yeah, it helped my business out a lot because Pitt was all online, and so students had more free time to come to the bar,” Ney said.

During last academic year, many bars in Oakland sold only to-go alcohol or did no business at all, due to county and state restrictions. By the time this academic year began, those restrictions had been lifted, allowing bars to operate at fuller capacity.

As a result, Ney said business has been “significantly better” this year.

“It feels great being able to interact with all the customers, almost all of which are Pitt students,” Ney said. “It feels great getting back into the groove and doing the things we like to do and serving people.”

John Elvasky, the owner of Hemingway’s Cafe, said he was surprised by how many students returned to his bar when it finally reopened last March after closing for 54 weeks. He said business remained high as restrictions regarding social distancing and capacity went away.

“I thought, when we first opened, I’m like, ‘Geez, we’re gonna be dead, everybody’s gonna be afraid to come in,’” Elvasky said. “But we’ve got lines for two weeks [after re-opening] out front, lines waiting to get in. And then when we were allowed to seat fully, we got packed.”

At first, Elvasky said, customers had to remain socially distanced and wear masks when not seated at their tables. Elvasky said Hemingway’s followed all Allegheny County Health Department guidelines, and said customers and staff complied with the rules.

“We had no complaints whatsoever, no pushback whatsoever, from the kids or the staff,” Elvasky said. “Everybody was very, very nice and understood the seriousness of it. And it was, it’s a serious situation, but, you know, it’s time to put it behind us, in my opinion.”

Businesses are no longer required by the state or county to implement mask requirements, social distancing or capacity limits. Ney said his bar is now “pretty much back to normal.”

“We have the sanitizer around for your convenience,” Ney said. “We limit, obviously, the number of people, but I mean, it’s not nearly anything like it was when COVID was still raging.”

“We did outdoor seating and we did slushy drinks to-go,” Pessolano said. “The slushies were a big hit. The outdoor seating was a huge hit, and it is coming back, I believe around the second week of March this year, so we’re excited about that.”

Gene’s weekly trivia nights, known as Trivia on Tap, moved online when the pandemic hit. Ney said the virtual trivia nights just weren’t the same as in person, but the bar now offers a hybrid version that allows for people to play at the bar or on Zoom.

“We did do trivia online, and people participated in that, but it wasn’t quite like the real thing at the bar,” Ney said. “Actually, we still do trivia online for those people that live out of state … Some people started doing it that don’t live in Pittsburgh now.”

Another way some bars still differ from their pre-pandemic operations is the hours they operate. Elvasky and Pessolano each said their businesses are no longer open for lunch most days. Pessolano said he would like to see the hours for Mario’s increase soon, but the bar is “not quite there yet.”

“We haven’t been able to really ramp up to the hours in which we’d like to be open, which would be at least Monday through Saturday for lunch, happy hour and at night,” Pessolano said. “Unfortunately, we’re not quite there yet, due to staffing and just demand, I guess, from clients.”

Pessolano said one thing that helps business at Mario’s is its ability to host private parties. Though this was not possible during much of the pandemic, he said requests for private parties are starting to grow again.

“At the time of the initial lockdown … I believe we had over 20 or 25 parties on our list already booked that we unfortunately had to cancel because we weren’t allowed to be open,” Pessolano said. “It was graduation parties. It was formal parties. It was UPMC parties. It was Pitt staffing parties. Those have just started to start trickling [in], like last night we had a rehearsal dinner for a young couple’s wedding.”

Elvasky, who has owned Hemingway’s since 1991, said he considered retiring before the pandemic hit. But he didn’t want to retire while Hemingway’s was shut down, and reopening gave Elvasky a “second wind.”

“I was considering retiring here anyway, even before the pandemic,” Elvasky said. “I’ve been here a long, long time, and getting ready [to retire], but I said, ‘I’m not going out like this.’”

Pessolano said seeing students enjoy themselves at Mario’s is the reason why he likes working in the bar industry.

“Seeing the straight enjoyment on their faces is just exactly why we’re in this kind of business, to make life on campus enjoyable for these 21-, 22-year-olds that are hundreds, maybe thousands of miles away from their family and friends,” Pessolano said. “Trying to give them a new home more or less, to feel welcome, to have fun.”