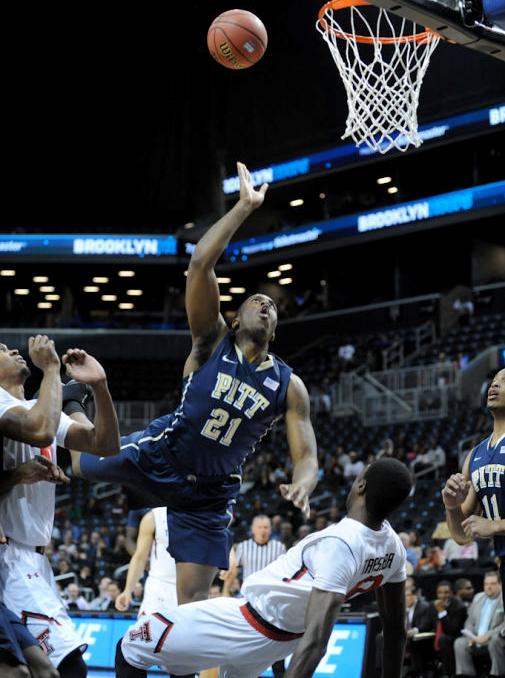 Former Pitt player Lamar Patterson (21) goes for a basket at a game in the Petersen Events Center in 2014.

JD Schroeder — a current mechanical engineer — recalled his former position as a vice president of the Oakland Zoo in 2012. That year, Pitt men’s basketball defeated Washington State in game three of the College Basketball Invitational finals, a small prize compared to what the Panthers were predicted to accomplish.

Back in the late 2000s and early 2010s, Pitt basketball was competing for national championships. Fans came out in droves to pack the Petersen Events Center. But when the Panthers won the fifth-ever CBI Tournament in 2012, not many people were in the stadium to celebrate.

“If we couldn’t get people to come during the regular season, we were not getting people to come to some weird tournament that no one had ever heard of,” Schroeder said.

The season before, the Panthers — ranked as high as second in the national polls — won the Big East regular-season championship and earned a 1-seed in the NCAA tournament. But a certain UConn junior guard’s heart-stopping shot dashed their conference tournament hopes. The Huskies eventually won the Big East Tournament.

UConn also won the national title, thanks in part to “Cardiac Kemba’s” incredible postseason run, but also because of Pitt’s collapse in the second round of the big dance. The Panthers took care of UNC Asheville in the first round, but couldn’t pull out a win against Brad Stevens and his eighth-seeded Butler squad. Pitt ended the 2010-11 season without a tournament title to their name.

Lifelong Pitt fan and current senior Alex Getchell remembered how close that team was to tasting the Final Four.

“I mean, we won the Big East regular season,” Getchell said. “But we didn’t finish the job, and it sucks because Pitt basketball used to be the best sport here.”

The 2011-12 Pitt men’s basketball squad entered the season as the No. 10 team in the nation. But despite the high ranking, the Panthers lost some head-scratchers against Long Beach State and Wagner College. The loss to the Seahawks pre-empted a seven-game conference losing streak, which included a humiliating 62-39 loss to Rutgers. Schroeder described how the stadium got emptier after each loss during the losing streak.

“Up until that point, tickets for a Pitt basketball game were extremely hard to get,” Schroeder said. “And just overnight, nobody came to the games. The bottom completely fell out.”

John Grupp, who covered the team for the Pittsburgh Tribune-Review, remembered the press conferences for that team, and the difference between head coach Jamie Dixon and his players.

“Dixon was always positive,” Grupp said. “He was the eternal optimist, but you could tell the kids were a little downtrodden. They couldn’t hide their disappointment.”

The season wasn’t all bad. Then-redshirt sophomore forward Lamar Patterson had a decent year, averaging 9.6 points and 3.6 assists per game as a regular starter. And he wasn’t the only player that performed well. Senior guard Ashton Gibbs also started every game and averaged 14.6 per contest on 38.2% shooting.

But those stats were irrelevant down the home stretch, as Pitt lost six of its last seven games in the regular season. Georgetown eliminated the Panthers in the second round of the Big East Tournament, the final nail in the coffin for their national tournament hopes. Gibbs took the brunt of the blame, claiming that he wasn’t the leader that he should’ve been.

“We thought they might sneak in,” Schroeder said. “And when the NIT announced that Pitt wasn’t invited, even the players were pissed.”

Pitt eventually accepted its spot in the CBI, but had to pay a $50,000 entry fee and $75,000 for the semis and championship rounds. Grupp explained that Dixon had his reasons for accepting that invitation, despite the cost.

“The only reason they went to that tournament was to give the seniors extra practice time,” Grupp said. “If Pitt had been starting three juniors, a freshman and a sophomore, they wouldn’t have gone.”

The first round took place on March 14, 2012, and the Panthers easily took care of Wofford, winning 81-63 in front of a sparse crowd. The final attendance number for that match was 1,449 people, a mere 11% of the Pete’s capacity. The attendance was a little better against Princeton in the next round, but not by much — 2,001. It didn’t matter, as Pitt disposed of the Tigers 82-61.

“The school spent upwards of $230,000 to be in the CBI,” Grupp said. “You had to pay a certain amount per round, and they didn’t make anywhere near that in ticket sales, so it became a pay-to-play type deal.”

Pitt’s next matchup was against a familiar face — Butler. This time, it exacted some revenge against the reigning national runner-up on their home floor in Indianapolis, defeating the Bulldogs 68-62 in overtime. Patterson dropped 13 points and snagged 10 rebounds, while redshirt junior guard Tray Woodall tallied 12 points.

“They beat us in the national tournament last year, so that was a fun storyline that people attached to this game,” Schroeder said. “And it was fun when we beat them.”

That set Pitt up with a best-of-three series with Washington State. The Panthers had home-court advantage, but the Cougars hosted the first game and won 67-66. The Petersen Events Center hosted the next two games, and Pitt took advantage. In game two, junior forward Talib Zanna came off the bench and scored 14 points, and Patterson added 12 points and five assists of his own. The Panthers won that contest 57-53, and closed out the series with a 71-65 title-clinching victory in game three.

The Panthers ended their season with a win for the first time since the 1975-76 season, and Patterson’s performance  earned him the tournament’s MVP award. The CBI also kickstarted his development as a staple on the men’s basketball roster.

“Lamar ended up being a huge scoring threat for Pitt later in his career,” he said. “The CBI tournament was a good preview of what he eventually became.”

Patterson is still playing professionally in Australia for the Brisbane Bullets of the NBL. Meanwhile, the Panthers returned to the national tournament three more times after the CBI — 2013, 2014 and 2016 — but they never made it past the second round in those runs. The last year Pitt made any postseason tournament was 2016.

Other Pitt basketball fans still remember the potential that the 2011-12 season held, and what the Panthers essentially wasted after competing for a national championship just one season earlier. Getchell didn’t celebrate the championship, but instead expressed disappointment.

“Looking at that roster now, it seemed like they should’ve been way better than 22-17,” he said. “I don’t really have much more to say about the season besides that to be honest.”

As for commemorating the 2012 CBI Champions, Schroeder made it a point to have Pitt leave that season as a memory and nothing more.

“That was one of our main goals after that season,” he said. “To make sure that the athletic department would not even entertain the idea of putting up a CBI banner.”