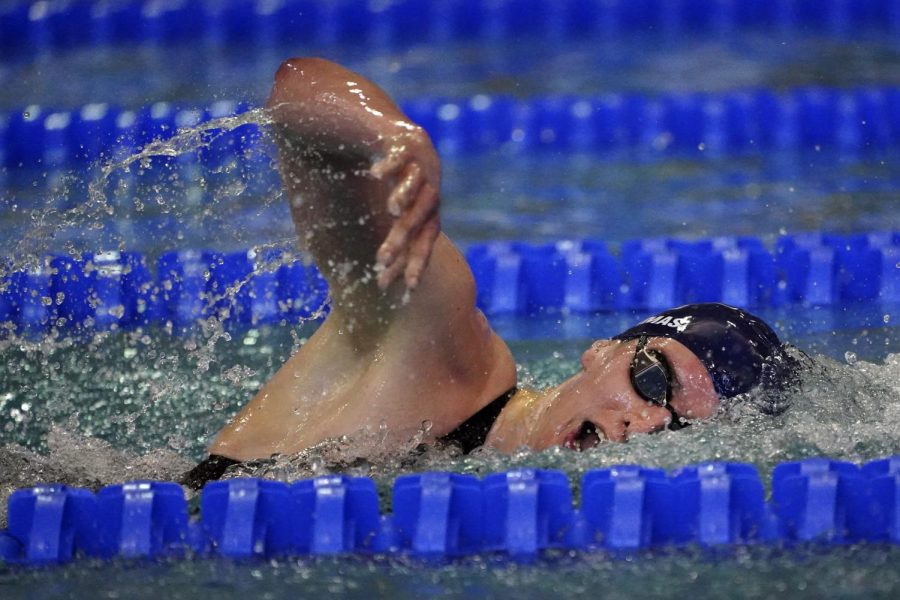 University of Pennsylvania senior swimmer and transgender athlete Lia Thomas competes in the 500-yard freestyle at the NCAA Swimming and Diving Championships at Georgia Tech in Atlanta on Thursday.

USA Swimming announced a new rule on Feb. 1 saying that in order to be considered for elite competitions, a transgender woman athlete must pass through a panel of three independent medical experts who will weigh the question of whether or not the “prior physical development of the athlete as a male” is a disproportionate advantage over cisgender females.

While this new rule establishes requirements for the highly debated question of transgender athletes’ participation in women’s sports, it fails to consider the lack of scientific research on their potential advantages.

Particularly in swimming, the difference between a biological male and a biological female’s results at the elite level is quite drastic. According to data used in USA Swimming’s announcement, the fastest female in 2021 would place 536th across all short course male events. The fastest female in long course events would place 326th in the male category. Having such disproportionate results between cisgender females and males proves the biological advantage that individuals born as males have in swimming competitions.

Lia Thomas, a transgender athlete from the University of Pennsylvania, has been very successful in the pool. Thomas competed in the Ivy League Swimming and Diving Championships in February, breaking six records and winning three individual events. Additionally, on Thursday, Thomas became the first openly transgender woman to win an NCAA swimming championship. Thomas’ success shows that athletes born male and transitioned female at the elite level can have great success.

Thomas’ success has affected cisgender female athletes. Many who follow the sport of collegiate swimming, including parents and coaches, have voiced outrage over Thomas’ success. They believe cisgender girls swimming against Thomas are at a biological disadvantage. However non-inclusive and vulgar some of these comments may be, the ever growing trophy shelf for Thomas suggests a gap in performance between Thomas and her competitors.

Where USA Swimming goes wrong with this rule is in the implementation and requirements. USA Swimming provides a one-sentence explanation for medical experts to consider the “evidence that the prior physical development of the athlete as a male, as mitigated by any medical intervention, does not give the athlete a competitive advantage over the athlete’s cisgender female competitors.” This is too open-ended and leaves the decision-making vulnerable to personal biases. There needs to be more research on the question of whether or not transgender athletes have a clear advantage and what an advantage really means.

More research needs to be done to better understand the performance of transgender athletes in swimming and other sports. USA Swimming implemented this rule following a trend set by many organizations before them, including the NCAA most recently in January. This speaks to the necessity of having a fair and equal field of play, but reveals the lacking research necessary for a consensus.

Inclusivity should be the main priority for sports, but without the fairness of competition, there would be no sports as we know them.

Ben Mankowski primarily writes about politics, economics and personal advice. Write to him at [email protected].