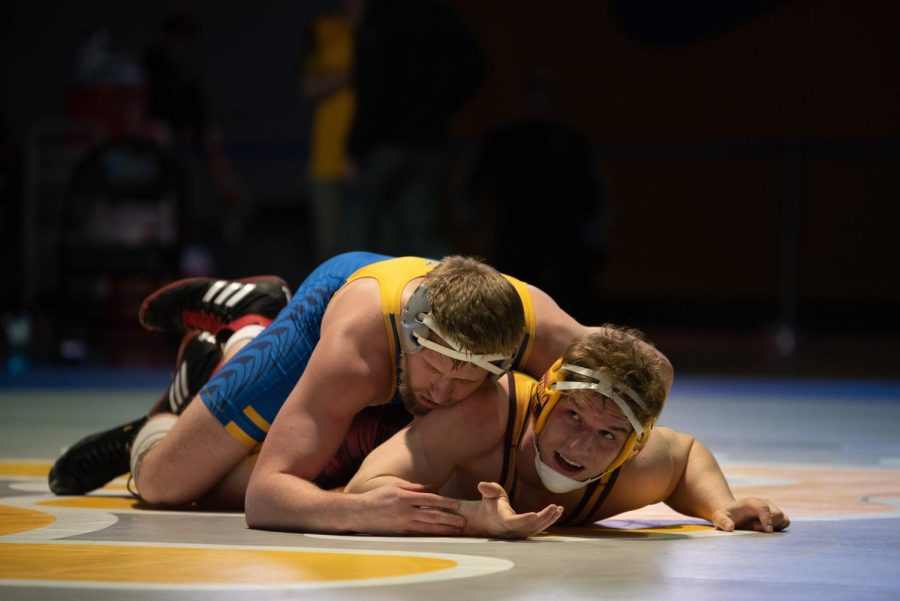 Pitt wrestling faced an up-and-down weekend at the NCAA Wrestling Championships in Detroit. The top wrestlers from across the country competed at the event, with national attention and coverage from ESPN all weekend.

The Panthers struggled to put wrestlers on the podium. Despite having six wrestlers qualify for the tournament, only one wrestler made it to the top eight medal winners. The Panthers also struggled to score points, as the team finished 24th.

Pitt’s only medal winner, junior Cole Matthews, came into the tournament riding a hot streak. The 141-pound wrestler won the ACC title earlier this month and earned a No. 6 seed in the tournament. Matthews continued his hot streak early, handily defeating his first two opponents. The redshirt junior then pulled off an upset against No. 3 Sebastian Rivera of Rutgers to advance to the semifinals.

Matthews then faced a disappointing 2-2 loss in overtime of the semi-finals to Kizhan Clarke of North Carolina. The Panther then lost again in consultations, before defeating Real Woods of Stanford to earn fifth place.

Wenztel entered the tournament after winning the ACC championship, and earning the No. 10 seed at 165 pounds. The redshirt senior dominated his first opponent, before falling to Carson Kharchla of Ohio State. Wentzel did not have much luck in the consultation bracket, as he fell to No. 4 Dean Hamiti of Wisconsin.

Bonaccorsi, who won the ACC championship this year, also faced a tough time in the tournament. The redshirt senior faced a disappointing upset at the hands of No. 21 Gavin Hoffman from Ohio State. Bonaccorsi then caught fire in the consultation bracket, winning two straight to get to within one match of the podium. But the redshirt senior fell just short, losing to Patrick Brucki of Michigan.

Redshirt senior Micky Phillipi also came up just short of the podium at 133 pounds. Philippi won his first match before falling to Iowa’s Austin Desanto. Philippi edged out two competitors in the consultation bracket. But, with a podium finish on the line, Philippi was pinned in the final match of his career.

The ACC was well-represented at the tournament. Virginia Tech placed eighth overall, which was the highest out of all conference competitors. The Hokies also had one finalist — redshirt junior Mekhi Lewis at 174 pounds. Lewis faced off against Carter Starocci of Penn State, but fell 5-5 in an overtime thriller.

North Carolina’s Kizhan Clarke was the ACC’s only other finalist at 141 pounds. Clarke came into the tournament seeded No. 15. But the Tarheel caught fire, winning four straight matches, including an upset over Matthews of Pitt. Clarke made it all the way to the finals, where he lost 10-3 to Nick Lee of Penn State.

The tournament also featured the return of the Ivy League to national competition. The Ivies opted to cancel winter sports last season, making this their first tournament appearance in three years. Three wrestlers from the Ivy League qualified for the finals, with Yianni Diakomihalis of Cornell winning it all at 149 pounds.

The tournament was Pitt’s final competition for the year. Only one Panther from this year’s tournament, redshirt junior Cole Matthews, will be back on the team next season.