Speakers explore culture and history at the Pittsburgh Humanities Festival 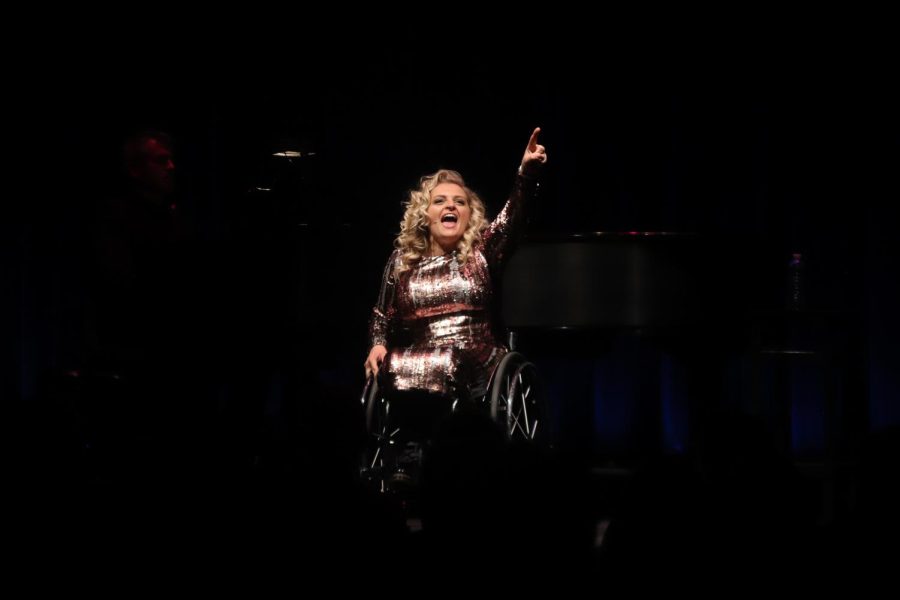 Ali Stroker performs at the Greer Cabaret Theater as part of the Pittsburgh Humanities festival on Monday.

For Randal Miller, the Pittsburgh Humanities Festival represents the “cross-pollination of ideas.”

“One of the taglines for the festival is ‘smart talk about stuff that matters’ — trying to create a space outside of the university setting for these ideas to live,” Miller, the co-director of the festival and director of dance and special projects for the Pittsburgh Cultural Trust, said.

The annual festival, organized by the Cultural Trust and Carnegie Mellon University, featured performances and discussions from actors, authors, artists and other speakers about subjects ranging from literature to amusement parks throughout this week. It highlighted Pittsburgh’s history and culture, celebrating its artistic achievements and examining its politics and persisting inequities.

Dulcé Sloan, a correspondent on The Daily Show, Shit-faced Shakespeare, a comedic theater company with a booze-fueled take on the Bard, and Ali Stroker, the first Broadway actor to use a wheelchair, headlined the festival at the Downtown Byham and Greer Cabaret Theaters.

The festival also hosted 14 core conversations, smaller niche events at the Trust Arts Education Center. Tickets were available for between $25 and $35 for the featured speaker events, and a pass for all 14 core conversations cost $10 for the general public and $5 for students.

Stroker kicked off the festival on the evening of March 21 to a packed Greer Cabaret Theater in Downtown, performing renditions of Queen’s “Don’t Stop Me Now” and Carole King’s “(You Make Me Feel Like) A Natural Woman” — as well as discussing her experiences as an actress with a disability. Anne Levin, a theater enthusiast from Squirrel Hill who attended the event, said Stroker was inspiring to the Broadway community.

“The people [here] tonight really appreciate Broadway, whether they’ve heard of her or not,” Levin said. “The fact that this young woman was in an accident as a child and was able to pursue her dream and have this career in musical theater is pretty remarkable.”

David Shumway, director of the Humanities Center at Carnegie Mellon University, has been a part of organizing the festival since its inception in 2015. He said this year’s festival sported an impressive lineup of speakers, from Pittsburgh and elsewhere.

“We have a number of speakers whose topics and experiences are strongly related to the Pittsburgh community,” Shumway said. “Ed Simon, a writer of books and journalism and a graduate of CMU’s master’s program in literary and cultural studies, will be talking about his book ‘An Alternative History of Pittsburgh.’ I’m going to be interviewing Kathleen George, who’s a local novelist, who’s written both a series of crime novels with a recurring detective hero, but also some other fiction.”

Shumway said the speakers drew from diverse disciplines in their discussions.

“There’s a session on graffiti and spray can art, which is a really interesting topic,” Shumway said. “We have a session on America’s energy policy and its relation to climate change … There’s a session on drag, featuring Pittsburgh’s first lady of drag, Kierra Darshell, in conversation with Richard Parsakian — both of these people are important people in the Pittsburgh LGBTQ scene.”

Miller said this year’s festival took a more comedic approach to the humanities in contrast to previous festivals.

“One thing we found very successful over the years is using comedy as a bridge to the humanities. These are still very human stories,” Miller said. “[Shit-faced Shakespeare] is a bridge to Shakespeare using this drunken improv show, still introducing what I would say is a new audience to that kind of work. Then we have Daily Show correspondent and comedian Dulcé Sloan — comedy bridging that gap.”

The organizers of the festival held an open call to the Pittsburgh community, offering the public an opportunity to audition for a speaking slot. Shumway said the objective was to make the festival accessible to those who appreciate the humanities outside of academic institutions.

“The premise of [the open call] is that the humanities are things that aren’t just done at the university or in cultural institutions — lots of people participate in them who aren’t paid to do so. We’re trying to showcase that kind of activity,” Shumway said. “This year’s speaker is an activist for the disabled community, and we think it’s going to be very interesting.”

Shumway said the overarching goal of the festival was to encourage enjoyment of the humanities, regardless of the audience’s academic background.

“We’re trying to bring the excitement and pleasure of the humanities to people who don’t normally get to experience them — that is, people who aren’t in college, either as students or teachers,” Shumway said. “Thinking about new ideas and works of art is interesting and fun.”

“The idea behind putting it in the cultural district as opposed to a university campus is to reach a broader audience. We’re taking this outside of academia,” Miller said.