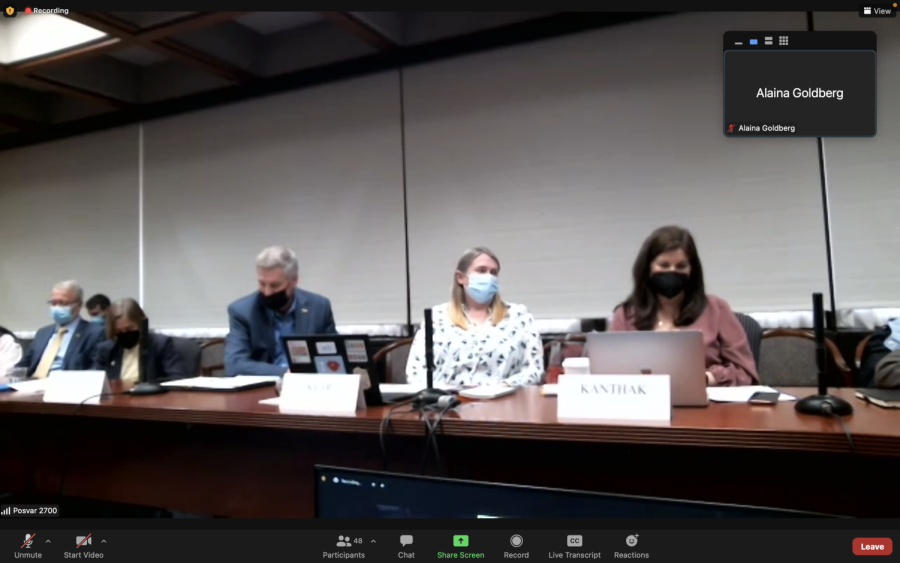 Chancellor Patrick Gallagher said while Pitt’s new masking guidelines are based on transmission and active COVID-19 rates, the decision to wear or not wear a mask is up to individuals beginning Monday.

“This is a step in moving forward for the University and community,” Gallagher said. “We will respect anyone’s decision of what they want to wear.”

Pitt announced this week that masks will become optional indoors starting Monday. This policy shift came after the Centers for Disease Control and Prevention’s recent changes to mask guidance, which no longer requires masks in communities with low or medium levels of COVID-19.

The Senate Council started its Wednesday meeting by discussing these new guidelines. The Council, which met in person and on Zoom, also discussed government funding for in-state tuition, the Russia-Ukraine war and external interference on what can or cannot be covered in courses.

Gallagher said the new optional masking policy does not apply in labs or other situations where personal protective equipment is required. University shuttles and buses will also continue to require masking.

Joe Suyama, an associate professor of emergency medicine and a member of Pitt’s COVID-19 Medical Response Office, said the University will continue to follow guidance from the CDC when establishing COVID-19 restrictions.

“Our most recent test results from Monday, March 21 resulted in one positive test among 550 total tests,” Suyama said. “This is promising ahead of the new masking policy and shows that what the University has been doing to mitigate COVID-19 is working.”

Suyama said Pitt is testing whenever possible, for both symptomatic and asymptomatic members of the community, which is extremely important.

“We have pre-exposure treatments for immunocompromised staff, students and community members that can provide protection with antibodies for three to six months,” Suyama said. “There is also treatment for those who get COVID-19, which we did not have before.”

Some in attendance at the meeting expressed concern with the new optional masking policy, specifically in the classroom. But according to Gallagher, most COVID-19 transmission occurs within social settings, not classrooms.

“Classrooms are not a high-risk setting,” Gallagher said. “We know that opinions in our community are going to be quite varied and there will be cases with legitimate concerns.”

Kristin Kanthak, the vice president of Senate Council, said she isn’t concerned about the new policy and hopes that both professors and students respect each other’s choices in masking.

“We do not want people to be in the position to ask others to mask or why they are masking if they decide to do so,” Kanthak said.

Gallagher also encouraged the Senate Council to help Pitt advocate for state funding at Pitt Day in Harrisburg on Tuesday. Pitt could receive an additional $7.7 million next year, based on the spending plan outlined in Gov. Tom Wolf’s proposed 2022-23 state budget. He said the funding will maintain the current in-state tuition discount.

“This allows us to discount $15,000 per student who are undergraduates in the Dietrich School of Arts and Sciences,” Gallagher said. “This is a total of $230 million in discounts.”

The Council also briefly discussed the Russia-Ukraine War. Senate President Robin Kear shared continued upset regarding the “atrocities of war” in Ukraine, which have taken place for a month since Russia’s initial invasion in late February.

“I applaud Pitt’s effort in supporting the small number of Ukrainian students at the University,” Kear said.

This resolution — which originally said the “University Senate rejects any attempts by external entities to restrict or dictate University curriculum on any matter, including matters related to racial and social justice” — came about following Florida’s “Don’t Say Gay” bill, which would remove dicussion of any and all coverage of homosexuality in K-12 courses.

“I’m sure many of you have been following developments that increase politically motivated interference in the K-12 curriculum,” Kear said. “We felt that it was important to put something forward for discussion to make our positions as Faculty Assembly clear on this matter.”

The resolution passed with 27 people in favor and two abstentions. However, there was a slight change in the resolution’s wording. The word “rejects” was replaced with the word “oppose