CMU International Film Festival unveils the ‘faces behind the masks’ 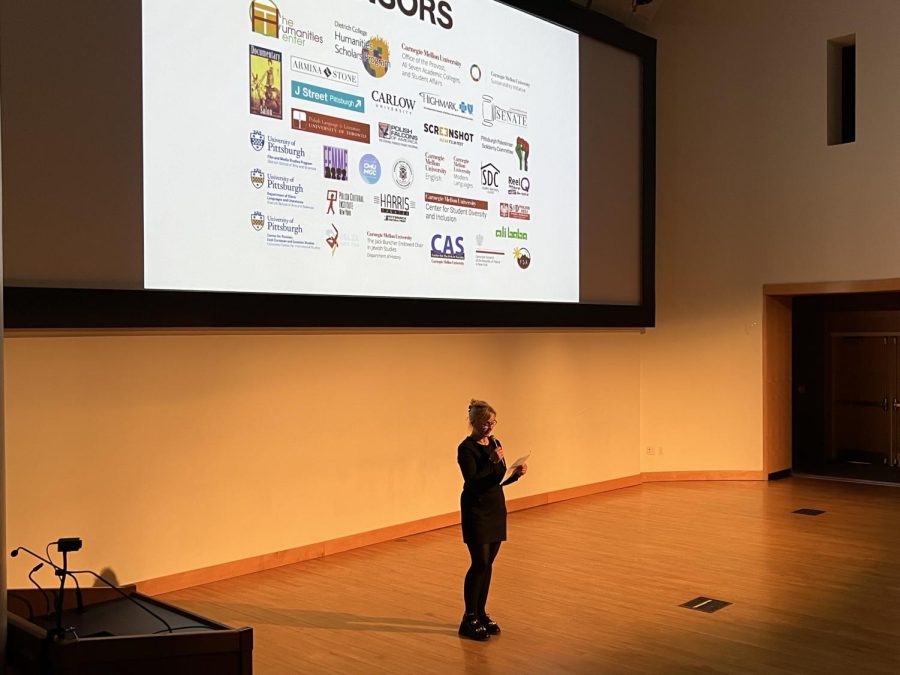 A speaker introduces a showing during the Carnegie Mellon International Film Festival.

Jolanta Lion, assistant director of Carnegie Mellon’s Humanities Center and part-time Polish instructor at Pitt, recalls asking pedestrians about the significance of masks in their lives leading up to the Carnegie Mellon International Film Festival.

“We interviewed people on the street [about] what masks mean to them,” Lion said. “Most of them would say, naturally, protection and health, but there were actually people that found masks as a different meaning – masks as national pride, masks as protest, masks as identity.”

Lion explored this idea as the director of the festival, which is running until Saturday in the McConomy Auditorium at Carnegie Mellon University, as well as in the Harris Theater and Carlow University’s Gailliot Center. The festival studies a different “face” each year — previous festivals have investigated faces of identity, conflict, globalization and many others. But this year’s festival chose something universal in the era of the COVID-19 pandemic — “faces behind the mask.”

Regis Curtis, a junior French, German and gender, sexuality, and women’s studies major at Pitt who interned with the festival, said the theme posed a broad question to audiences about their own relationship with masks — the identities, façades and disguises people wear.

“What we don’t want to do is tell you exactly what we want out of that theme,” Curtis said. “A lot of what we’re doing is finding films that deal with things that are hidden and things that could be revealed through analysis or the act of seeing … it’s really an opportunity for the audiences that we bring to have that discussion amongst themselves about what that mask means to them.”

The festival suffered setbacks during the pandemic, according to Aarushi Jain. The Carnegie Mellon graduate student in entertainment industry management said this year’s festival was a welcome departure from the virtual format.

“The festival has been going on for a while, but the last two years have been significantly difficult because of COVID — but even then, the people involved in the last two years did a really, really good job making it virtual,” Jain said. “This year, we’re really glad that we got to do it in person again, and faces actually came out from behind the mask.”

The festival showcased 14 films from around the world. Opening night featured the Moroccan film “Casablanca Beats,” while others like the Polish film “Leave No Traces” and the Brazilian film “Private Desert” were screened during the festival.

“[It] shows what daily life is like for the soldiers on the ground. It was filmed over several months before the breakout of the war [in the] Donbas area,” Lu said. “It takes a microscopic look into individuals’ lives.”

Lu said these films are meant to confront the audience’s preconceived notions about the world.

“The criteria to select films are that we want them to be thought provoking, and also to challenge the social status quo that people have been accepting in their daily lives,” Lu said. “[We want to] have people see the other perspectives and think about it, without delivering any message of how they should think about it.”

The festival also featured Q&As with the directors of “Casablanca Beats” and “Leave No Traces,” among others. A panel discussion following “Trenches” included Pitt faculty members Will Zavala, Adriana Helbig and Tetyana Shlikhar. Some receptions included food from the culture portrayed earlier on screen — Chinese catering from Squirrel Hill restaurant Yue Bai Wei followed the Mandarin-language film “Ripples of Life.”

Curtis said these events were intended to create a culturally immersive environment.

“Those moments are when this festival and this organization are at its peak,” Curtis said. “We started late this year, and had some issues especially with the COVID uncertainty, [so] we weren’t able to make every single screening this grand event, but we have made sure that we can show exactly what this festival is in a perfect year multiple times.”

One thing notably missing from the festival was the English language. Audiences heard around 16 languages throughout the festival, none of them English except a few borrowed words in Maltese. That element of the festival was intentional, Jain said.

“It exposes people to different cultures, especially in a place like this — not just CMU, but the US in general, where there are so many cultures and expats that come together to stay here,” Jain said. “It helps people live together. It helps people have a discussion, a healthy discourse.”

Lion said she hoped these films would help break down stereotypes.

“The films are letting the audience meet the other, to know the other, to make the other someone that will become familiar,” Lion said. “If that happens, you will understand the other much better.”

Curtis said at the end of the day, the festival’s objective was increased cultural exposure.

“It really is just providing the Pittsburgh community with an opportunity to engage with diversity and see the world from one auditorium at CMU,” Curtis said.