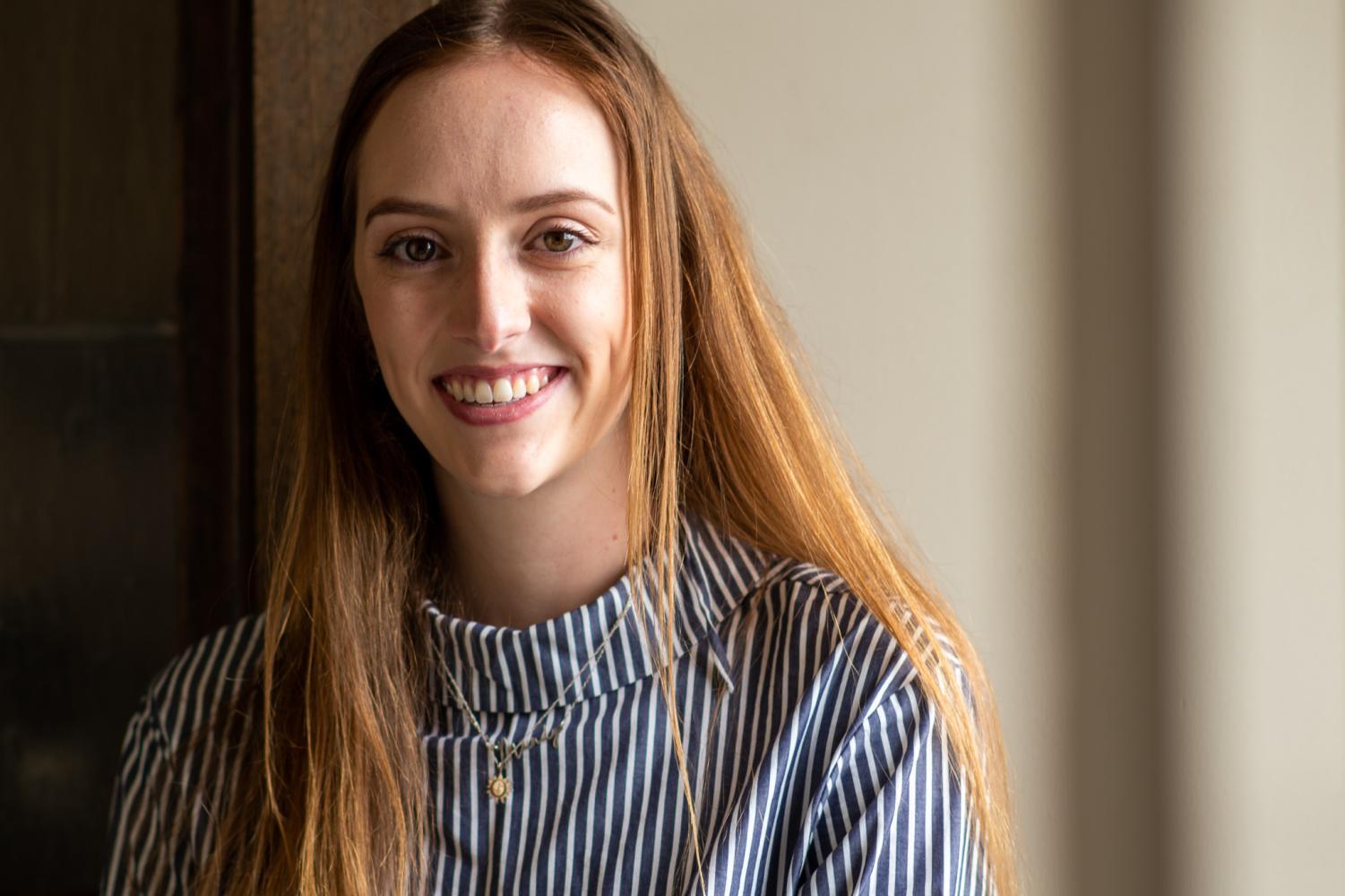 If you wanted to describe Mandy Cooper in one word, “social” would work well. It’s the part of medicine she’s most interested in after all.

“I volunteered at the local hospital near me, St. Clair Hospital,” Cooper said. “I like talking to the patients about their health concerns and stuff like that. I like the social interaction more than the science side of health care.”

It’s hard to describe anyone in one word, especially when they’re as involved in the Pitt community as Cooper. Besides studying as an undergraduate nursing student, she’s the section leader of the Pitt Golden Girls, philanthropy assistant for the Delta Zeta sorority and conducting independent research.

“I love being busy. It definitely keeps me motivated and keeps me organized and on schedule,” Cooper said.

Cooper's many passions include helping others and advocating for accessibility in health care, which stems from personal experience. Cooper grew up in Pittsburgh and began to notice an issue with her hearing around the time she started sixth grade.

According to Cooper, she kept failing her hearing tests at school, yet was assured by her primary care provider that there were no issues with her hearing up until she visited an audiologist in her early adolescent years.

“Sophomore year of high school, I think it was, I just went to the audiologist at Children's Hospital. And they found out, I do have severe sensorineural hearing loss in my left ear,” Cooper said. “It took almost five years to get diagnosed and get treatment. Kind of crazy.”

She has since worn a hearing aid in her left ear, which has made some aspects of life challenging.

“I’ll hear that someone's talking and I know that I should know what they're saying. But it just sounds like gibberish,” Cooper said. “It's just like little annoyances that make it difficult to understand the conversations.”

Despite the challenges, it has inspired Cooper to focus her research on people who have trouble finding treatment. She conducts research through Pitt and began her current project over the summer while she was a Brackenridge fellow.

“My work currently focuses on how patients with hearing loss who are under the age of 26 access care, and what barriers they might have to care, and what facilitates good care,” Cooper said. “I did a quantitative portion over the summer as a Brackenridge Research Fellow.”

According to Cooper, she’s observed that people living in underprivileged areas have a harder time accessing care.

“I've had a lot of common threads in my research. The biggest thing I would say is the difference between the children who live in rural areas versus the urban areas — even just in their school systems, in the more rural areas, they tend to have less readily available resources,” Cooper said. “One more thing that really stuck out was the lack of knowledge that PCPs have.”

“Her personal development of her own research interests really blossomed over her sophomore to junior year,” Germack said. “She let me know she was really interested in access to health care for people with hearing disabilities. And we ended up working together to develop a research question hypothesis and a pretty sophisticated research project to understand how people with hearing disabilities navigate healthcare resources.”

Cooper’s interest in helping people who are deaf or hard of hearing is not limited to her research. Cooper joined the Delta Zeta sorority during her first year at Pitt along with several of her friends from nursing school, and is currently the philanthropy assistant and the ASL accessibility chair. As accessibility chair, she teaches the other sisters ASL and helps organize fundraising events for groups supporting the deaf and hard of hearing community.

“Our major event this semester is going to be Hoops for Hearing. It's going to be a basketball tournament. And so we'll sell tickets like that, and probably sell shirts, do a raffle, things like that, like a silent auction, maybe,” Cooper said.

Cooper is also section leader for the Pitt Band’s baton twirling team, the Golden Girls. She said she joined the team because she likes to show school spirit at games, and was a cheerleader in high school.

“I think the marching band has more to do with my passion for school spirit in general. I absolutely love attending sporting events and like having a reason to be there. And to be enthusiastic and to support the team,” Cooper said.

Jessica Potez, choreographer of the Golden Girls, was amazed by Cooper’s ability to juggle so many responsibilities. Potez said Cooper once went straight from an exam in her night class to a game to perform.

“Mandy went to her exam ready to go for the game. So then she could just focus on the exam. And then she got a ride and was at the field and didn't skip a beat,” Potez said. “Her ability to juggle all these different aspects of the thing she's involved with Pitt, I think, just shows how wonderful of an undergraduate student she surely is.”

Cooper and Potez both attended the Ruby Daugherty and Sherry School of Dance — an all-ages dance studio in South Park Township, located about 30 minutes south of Oakland. Through that connection, Cooper decided to audition for the Golden Girls. Cooper had already decided to attend Pitt because unlike other nursing schools, which make you reapply as a sophomore, Cooper could be directly admitted to the nursing school, and so she reached out to Potez about auditioning for the Golden Girls.

According to Potez, Cooper’s dedication allowed her to quickly rise up the ranks after making it onto the team.

“She just has been such a smart learner and engaged and became very involved right away,” Potez said. “Becoming a squad leader, as a sophomore and then becoming a section leader as a junior is quite an accomplishment because typically, those leadership roles are things you see in the later years of your undergraduate career.”

One of Cooper’s favorite memories as a Golden Girl was attending last fall’s ACC Championship game against Wake Forest.

“The whole game was super nerve-wracking. And the Wake Forest student section was really really mean to us,” Cooper said. “And so it felt really satisfying to win in the end. And just in general, people always think Pitt fans don't travel well. But I thought that the representation at that game was awesome. The energy there was just like, super, super exciting.”

Cooper said she has many plans for after graduation, including potentially working as a nurse, getting a doctorate of Nursing Practice or going into mental health advocacy.

“Right now, I am still thinking about what I want to do. I have an internship coming up at UPMC Children's Hospital in their NICU. And I think I'd want to go into mental health — that area of care also needs a ton of advocacy and like reform,” Cooper said.“I also would love to eventually go back to school and get my DNP or become a nurse practitioner and continue with research, because I do like learning about different patient populations and how we can better serve them.”

Potez praised Cooper’s hard work and dedication, and said she has much potential moving forward due to her ability to handle so many tasks at once.

“She is someone you can always count on. She's the type of student you asked her to do something one time and it is done. She doesn't need reminders,” Potez said.  “Being a young student, being in college, it's, you know, the first time you're truly on your own and adulting. So I think it's just great to see how well she's coming into her own and being able to accomplish so many great things.”