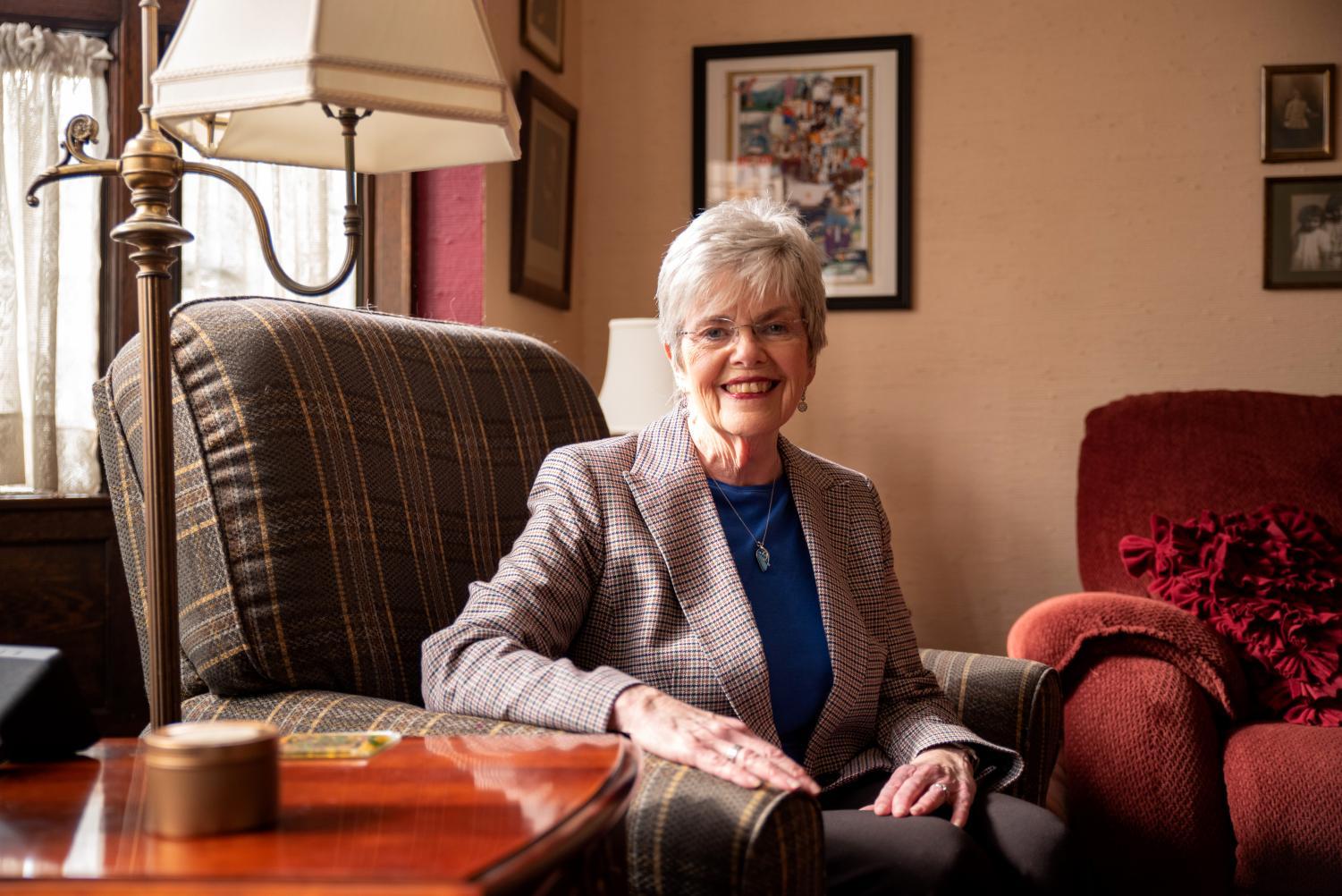 Kathy Gallagher is a rare combination — both a Pitt and Penn State graduate. After completing her undergraduate degree in elementary education in State College, she returned home to Oakland and obtained a masters degree in library sciences at Pitt.

In the years since, Gallagher has kept her roots firmly in the Steel City. She worked for decades as a librarian at public schools in the Hill District. She is now retired but keeps busy, serving as the president of the Bellefield Area Citizens Association, a community advocacy group that aims to improve the quality of life of residents in North Oakland.

While her degree comes from elsewhere, Gallagher has never abandoned the close ties she has to Oakland. Gallagher’s grandfather, Patrick, who was the president of the Duquesne Construction Company, helped build some of the many grand, historic churches that still stand around Pittsburgh. She still takes great pride in visiting St. Boniface Catholic Church on the North Side and Sacred Heart Catholic Church in Shadyside, both of which her grandfather built.

Gallagher said her love of historic architecture and preservation comes from her grandfather.

“My grandfather was a builder of some of the big churches in the city of Pittsburgh,” Gallagher said. “He built a number of buildings in Oakland and it’s one of the things I’m passionate about — architecture and preservation.”

Gallagher still lives in the same North Dithridge Street house  that her grandparents bought for $10,000 in 1914 — a tall, Shingle-style home built in 1893 that features glass windows arranged into irregular, outcropping bays, some with intricate stained glass. The signs of age are apparent on its green and beige facade, but the old Victorian is still charming, so much so that it earned historical landmark status in May 2020.

The property was worthy of historic landmark status because it met certain criteria laid out by the City. First, it was associated “with a person or persons who significantly contributed to the cultural, historic, architectural, archaeological or related aspects of the development of the city of Pittsburgh” — her grandfather. Evaluators from the City added that the property was an “exemplification of an architectural type, style or design distinguished by innovation, rarity, uniqueness or overall quality of design, detail, materials or craftsmanship.”

While the buildings that surround it grow, change and modernize, The Gallagher-Kieffer Estate, as it is referred to in official City records, remains a sanctuary for Gallagher’s love of intricate design. As high-rise apartments tower above the neighboring houses, the Gallagher Estate is a reminder that there is still character in Oakland and that history has a right to exist alongside modernity.

Gallagher — who is approaching her 77th birthday — is proud to still live in that old house. Her family’s history permeates it and the surrounding neighborhood, and takes great pride in protecting and conserving it. She loves where she lives and that’s why she’s taken such an active role in making it better.

But the actual work required to create quality lives for residents is difficult because of Oakland’s diversity. The neighborhood plays host to permanent residents and year-to-year renters, college students and families, schools and businesses, museums and hospitals.

Inevitably, these intermingling groups create friction and the more residential parts of Oakland are where permanent residents and students tend to butt heads, according to Jamie Ducar, executive director of The Engaged Campus, a branch of Pitt’s Office of Community Engagement.

Ducar said Gallagher and other residents obviously want to keep noise from student parties down as much as possible, but also help find creative ways to keep the neighborhood connected.

“She’s really interested in how we can continue to build community around space,” Ducar said. “There is an old pump station at the corner of Center Avenue and Dithridge and she has been really steadfast in bringing up to the City that she’s interested in updating that space for community use.”

The plan for a new community center at the Herron Hill Pump Station, which ferries water to the City’s hilly neighborhoods is currently in the Oakland Plan — a long-term development roadmap created by the City government.

Still, Oakland is fractured culturally, practically and politically. The people and institutions that call the neighborhood home are naturally divided, making the work of bringing different Oakland stakeholders together difficult. The fact that the parts of the neighborhood are split between multiple City Council districts makes things even more challenging, according to Councilperson Erika Strassburger.

“From a city planning perspective, [Oakland] could be broken down into five different neighborhoods,” Strassburger said. “It is already balkanized. … but luckily the other two council members [that represent Oakland] and I work well together.”

Ducar has worked on Pitt’s community engagement team for more than four years and she characterized the competing interests of Oakland residents as simply differences in priorities.

She said while those who live on Gallagher’s street might be more concerned with noise or parties on roofs, residents on Coltart Avenue in Central Oakland would focus on new construction and development. Ducar and Gallagher agreed that many residents want the same things, so creating an Oakland that works for everyone is just a matter of connecting the separated populations.

This is where Ducar’s office, and Pitt as an institution, can help. Gallagher said Pitt has been a great asset in helping BACA and other permanent residents reach students so the two groups can close the distance themselves.

“Every year a student says to me ‘We didn’t know regular people lived here’ and every year the residents come out of their condominiums and say ‘These students are pretty interesting,’” Gallagher said. “But then the challenge is that you have to do it all again the next year because it’s a whole new group of students and sometimes residents.”

“She’s surrounded on all sides by condos and apartment buildings and students and she’s been able to act as a center of gravity for the neighborhood,” Ducar said. “She is welcoming to everyone. … She pays attention … and she reaches out proactively to let us know what’s going on.”

She’s been one of the few constants in a neighborhood that’s eager to change as quickly as possible. But for as much as she loves conservation and preservation, Gallagher said she knows the neighborhood won’t stay the same forever. To that end, she welcomes students and other short-term residents into BACA, and her relationship with Pitt ensures there will always be a formal line of communication between her and the students that rotate through rental homes and apartments each year.

Like anyone, Gallagher said she just wants respectful, cooperative neighbors, and thanks in part to her work, that’s been the reality of the past few years. Now she’s able to enjoy Oakland’s convenience and culture.

“Oakland has everything — culture, beauty, walkability,” Gallagher said. “As I said, I'm an architecture fanatic and I love the beautiful architecture in Oakland. We have the parks, we have the universities, I can walk to medical appointments. I think it has just about everything anyone could want in a neighborhood.”