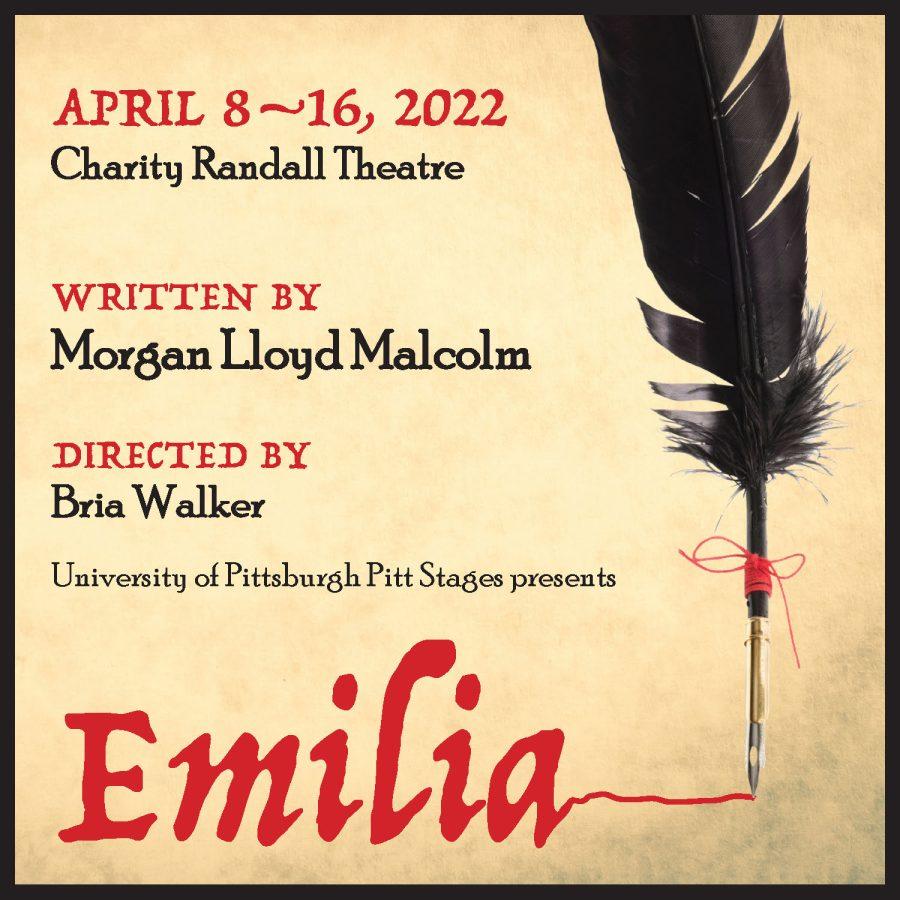 The 16th century poet Emilia Bassano is a mystery to many, since much of the history about her life is vague. Whether she was a writer, muse or love interest, Bria Walker, director of the play “Emilia,” said the production is largely a story about a woman’s voice.

“Some believe that she was Shakespeare’s lover and muse. Others believe she’s the one who actually wrote Shakespeare’s works,” Walker said. “No matter what your theory is, this is a story about a woman who fought to make her voice heard.”

Pitt Stages’ “Emilia,” written by Morgan Lloyd Malcom and based on the life of this mysterious woman, will run this weekend on Friday and Saturday at 8 p.m. and Sunday at 2 p.m. Performances next week will run Tuesday through Friday at 8 p.m., with two performances on Sunday, at 2 p.m. and 8 p.m. General admission is $15 per person at the Charity Randall Theatre. Attendees are required to show proof of vaccination.

“Emilia” tells the story Emilia Bassano Lanier, a writer of radical feminist poetry who lived during the English Renaissance period in Bishopsgate, London. There is little known about Emilia, though history indicates her works are one of the first published collections of poetry written by a woman in England. Historians speculate that Emilia may be the “Dark Lady” of William Shakespeare’s sonnets.

The production features 29 characters played by 18 actresses, who portray different versions of Emilia throughout the play. These versions consist of individuals of varying social classes and interests — including men, women, lords, ladies, peasants, muses and musicians.

The play “Emilia” fills the unknown gaps of Bassano’s life in a sort of mock history play. Walker said the play tells the story of a woman fighting for agency.

“The show is a memory, a dream — a creative historical take on the life of Emilia Bassano Lanier. This show is about agency,” Walker said. “It gives voice to a woman whose life has been told by others, particularly men.”

Jamiya Forna, a sophomore international area studies and law, criminal justice, and society major, plays Emilia 3. Forna said the story is told from the perspective of an elder Emilia. Emilia 3, the oldest version of Emilia that the audience sees, shares the story of her life with the audience.

“In her retelling, she utilizes younger versions of herself and portrays the important moments that they shared with the many people that made her who she is,” Forna said. “All these people that have impacted her life in the show have vastly different personalities and opinions but all work together to highlight what Emilia 3 has decided is vital for people to know.”

Hailey Brownley, a first-year theater arts and psychology double major, plays the roles of Lord Henry Carey, Emilia’s love interest, and Judith, a fictional friend of Emilia. She said the show highlights a few of her favorite themes, such as sexism during the time period.

“It depicts the journey of sexism towards women, and honestly any non-cisgender male-identifying humans, which we still are working on today,” Brownley said. “It tells the story of the incredible, real-life, overlooked poet.”

According to Walker, the characters seen in “Emilia” show a wide range of emotions and the roles require the actresses to be versatile.

“Their roles span from being hilarious to incredibly serious. This show requires each actress to be versatile and courageous,” Walker said.

Stage manager Shamus Bonner, a junior theater arts major, said the play does an excellent job at showing its many interpretations of Emilia.

“As the story progresses through her life, we see her transition from her youngest self Emilia 1, to Emilia 2 in the middle of her life, then we end with Emilia 3, which is such a unique way to tell a semi-biographical story such as this,” Bonner said.

Lena Ruther, a sophomore theater arts and English literature double major, is a part of the ensemble. Ruther said the characters she portrays work against Emilia and fuel her to fight for women’s rights.

“I do a lot of background work in the show,” Ruther said. “My characters are basically terribly racist and sexist men that Emilia encounters and that fuel her resistance and protest to the mistreatment of women.”

According to Forna, throughout the rehearsal process, the cast worked to develop their complex characters by working with a choreographer and asking questions about the text, such as what would society be like during the Renaissance era and how were women treated. Forna said the cast also worked with a dialect coordinator to achieve specific accents of the time.

As the production came together, the cast began to wear traditional Renaissance skirts to get into character. Forna said the cast spent a lot of time in costume skirts to learn how to move in them.

“We started wearing the base layer of our costumes which are corsets and hoop skirts to become better accustomed to them and learn how to move in them,” Forna said. “It was an adjustment, to say the least, but every time they tied into my corset I felt more in touch with my character.”

Bonner said the result of everyone’s work is a production unlike others.

“This is the most unique show I’ve had the opportunity to work on,” Bonner said. “I don’t want to give too much away, but I think the script and production breaks a lot of new ground and is something unlike anything people have seen, especially for a college production.”