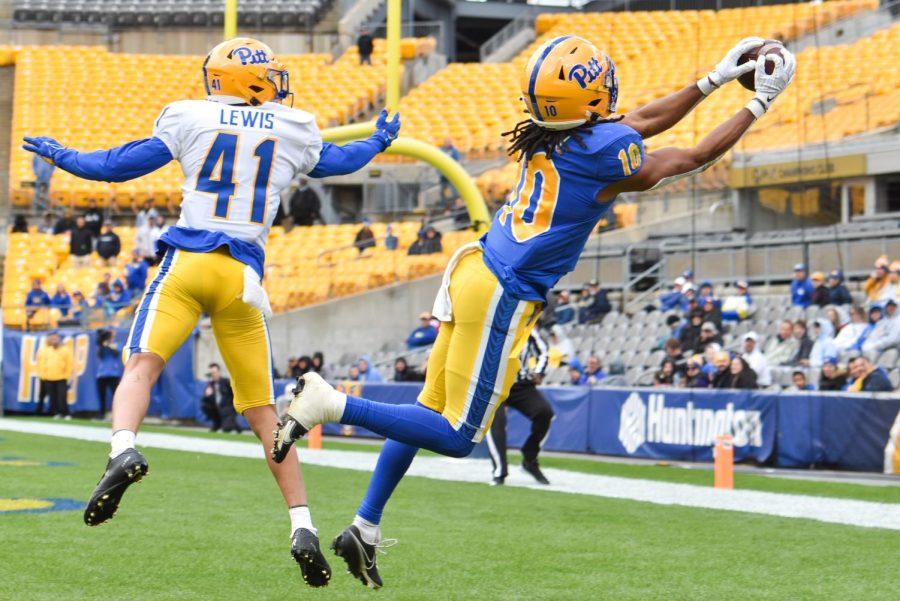 Jaylon Barden (10), a junior wide receiver, goes up for a pass against Jehvonn Lewis (41), a redshirt sophomore defensive back, at Pitt's spring game on Saturday.

After nearly three months of spring practices, head coach Pat Narduzzi and the Panthers played in front of fans for the first time since late December on Saturday. Under the overcast Pittsburgh sky, Pitt alumni and fans gathered at Heinz Field to get a preview of the 2022 Panthers. While the offense struggled in the contest, Narduzzi said he was glad to see the team escape the game without any injuries.

“The most important thing is that we come out of the Spring Game healthy,” Narduzzi said. “Coming out of it healthy was the only key… we got a lot of work done and I’m happy where we ended.”

Gold took down Blue 10-7 behind a solid performance from its defensive front-seven and a few explosive plays on offense.

The heavily discussed quarterback battle got off to a hot start, with senior Nick Patti connecting with transfer sophomore receiver Konata Mumpfield for a 55-yard completion. Patti rolled out of the pocket and found his receiver free between the hashes. Patti said it was exciting to take a shot early and connect with Mumpfield.

“We knew we wanted to take a shot on the first play,” Patti said. “We got a good guy on a good route and it worked out for us.”

While the drive didn’t end with a celebration in the endzone, sophomore kicker Ben Sauls nailed a 41-yard field goal to put Gold up with an early 3-0 lead.

But the performances from the quarterbacks cooled off quickly.

Senior quarterback Kedon Slovis’ start wasn’t as pretty. Gold’s defensive line didn’t give Slovis much time at all to make his progressions, forcing him to get rid of the ball quickly. His attempts were typically short of the sticks upon the pressure from the Gold Team.

Senior defensive lineman John Morgan III was one of the main disrupters for Slovis. Morgan broke through the Blue Team’s offensive line on multiple occasions, registering one sack and 1.5 tackles for loss early on. Gold team senior linebacker Shayne Simhon got in on the fun and intercepted Slovis on another pass that was short of the sticks.

On Gold’s final possession, Patti kicked off the drive with a 43-yard pass to senior receiver Jared Wayne. Patti hit his target in the middle of the field and Wayne did the rest. Wayne made a few people miss and ran deep into Blue territory. Junior running back capped off the drive with four very emphatic runs, going for 37 yards and a touchdown to put Gold up 10-0.

Carter won the offensive most improved player from spring practices award this spring and Narduzzi said it was encouraging to see it translate to the field.

“Daniel has had a really good football running the football when he’s had the opportunities,” Narduzzi said. “He’s unselfish… he can do a lot of different things. He’s been playing at a high level.”

The Gold offense outpaced Blue 141 to 44 in the first half, with Slovis struggling to make his reads and move the ball down the field.

Slovis came back out to start the second half for Blue, but it was much of the same for the transfer from Southern California. The Blue offensive line failed to provide a clean pocket once again and Slovis couldn’t get much going on offense. Slovis said while he knows he’s in a battle for a starting job, he’s just trying to be the best player he can be.

“My mindset is to be the best player you can be,” Slovis said. “You can’t control how well other people in the competition do. My mindset is ‘compete with yourself’… all the guys have been so great. It feels like we’re a bunch of friends out there playing football.”

Slovis finished the game completing 10 of 21 passes for 64 yards and an interception. Patti attempted just nine passes but completed four of them for 108 yards. Narduzzi said he won’t make any snap judgments after the spring game regarding the quarterbacks.

“It’s hard to tell,” Narduzzi said regarding how his quarterbacks performed. “We’ll go back and look at the tape. I know Nick had two nice passes… I thought Kedon was good with what he had out there… he had some drops.”

Outside of a few offensive bursts, the defenses thoroughly outclassed the offensive units. Junior quarterback Joey Yellen replaced Patti late in the third quarter and immediately fumbled the ball deep in Gold territory. Blue capitalized on the mistake and scored its first points of the day on an 11-yard rush from Carter — who switched teams during the game — to cut the deficit to 10-7.

But Blue couldn’t keep the momentum going on offense and crossed the 50-yard line just once after that. Junior quarterback Eli Kosanovich came in to relieve Slovis and promptly threw an interception deep in his own territory to throw water on any chances of a Blue comeback.

Pitt fans will have to wait several months before they get to see the Panthers back in action again. The Panthers will kick off their season in a renewal of the Backyard Brawl against West Virginia on September 1 at Heinz Field.