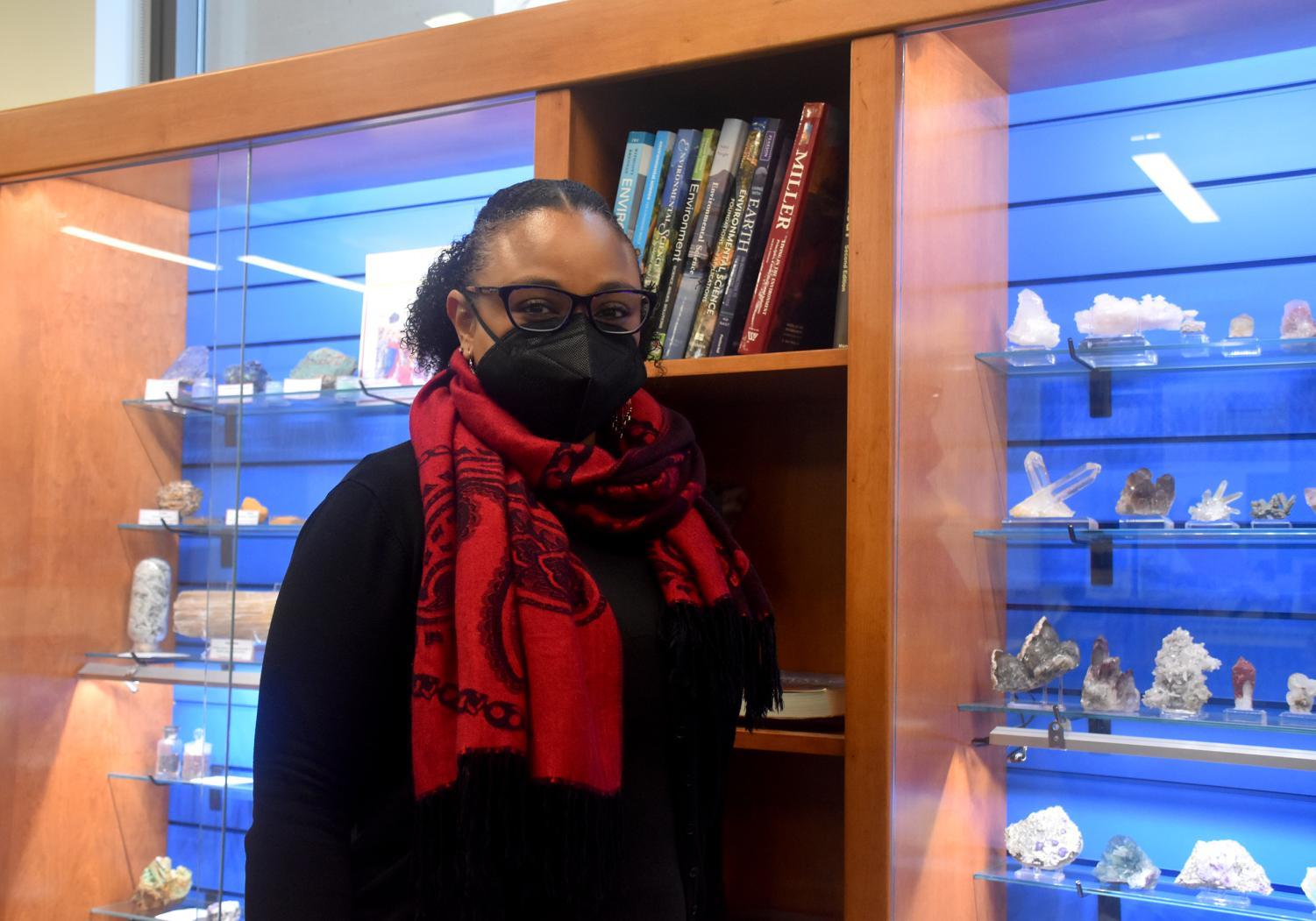 When Danielle Andrews-Brown started college at South Carolina State University, she envisioned herself as a medical doctor. But the formaldehyde and dead animals in her anatomy course disgusted her, so she found herself turning to the outdoors.

During her sophomore year in 2001, Andrews-Brown discovered a passion for environmental science through a summer program at the Savannah River Site. A professor in charge of the program personally invited her to attend.

“I really fell in love with environmental science in its entirety,” Andrews-Brown said. “Then I narrowed down to soil and water as I continued my studies.”

Andrews-Brown grew up in Trinidad and Tobago, located just off the coast of Venezuela. She left her home after graduating high school and immigrated to the U.S. in 2000 for what would eventually become a successful career as an environmental scientist, academic adviser and professor at Pitt.

Trinidad is a small nation about the size of Delaware with a population of about 1.3 million, according to Andrews-Brown. She said all citizens in Trinidad share a national sense of culture, but when she came to America and realized there wasn’t a “particular American culture,” she struggled to find a group to identify with.

“We celebrate each other all the time, and we might do some things differently, but the country as a whole has a culture that we all identify with,” Andrews-Brown said. “It wasn’t that way in the U.S. when I first came here, and it was really difficult transitioning into that space.”

After graduating from SC State in 2004, Andrews-Brown left South Carolina and relocated to the University of Kentucky to receive her master’s degree in plant and soil science. She said her master’s project focused on stream restoration, and was her favorite research experience.

Andrews-Brown received her Ph.D. in 2011 from Pennsylvania State University in soil science, where she remained as a postdoctoral scholar and research associate until her mother’s unexpected death in 2015. Following that experience, Andrews-Brown decided to spend a year in South Africa with her husband, who had already planned to lead a study abroad experience there through Penn State.

During her time in South Africa, she received notices from colleagues at Penn State about a job opening for an environmental studies program coordinator at Pitt. Even though the position was not research-oriented, Andrews-Brown decided to apply anyway.

“I figured I need a change, a fresh start, because my mom and I were really close and it really threw me through a loop,” Andrews-Brown said. “My husband was still working for Penn State at the time and he was going to be out of the country for a year … so I took the opportunity to travel with him.”

Andrews-Brown said Pitt offered her the position in 2016. She began working as the adviser and coordinator of the environmental studies program in 2017, and has remained at Pitt ever since.

“I have mentored and advised students, but not in the official capacity that I’m doing it now. I think research was my love, but for personal reasons I just needed a switch,” Andrews-Brown said. “This seemed like a great opportunity to try something different and still be able to use the skills I had developed along the way.”

Given that Andrews-Brown had never lived in a big city before moving to Pittsburgh, she said it took her time to get accustomed to living in a “concrete jungle.” She had never resided in a place with constant noise from traffic and little trees. But she quickly noticed how friendly everyone in Pittsburgh was, and said her students are the reason she has stayed all these years.

“I love how much the students are able to impact the decision-making and really advocate for things that they want. Although it may happen slower than we want it to, we do get to see those changes because students advocated for it,” Andrews-Brown said.

Nearly 20 years ago, Pitt received an endowment from the Heinz Endowments to form the environmental studies program, according to Andrews-Brown. She said it originally served as a “catchall'' for all students interested in anything environmental, and was very science heavy.

Andrews-Brown said about one or two years prior to her joining Pitt, the University created an environmental studies major. She took this opportunity to make the new major more interdisciplinary and provide a wider range of course options, including natural sciences, social sciences and humanities.

“If you have an interest in environment, but you are not solely science-minded, you can still find a home in this major,” Andrews-Brown said. “It’s focused on policy, sustainability, environmental justice, etc. and not only on the science of the environment.”

Andrews-Brown said she is currently working to rename the environmental studies major to incorporate the term “sustainability,” and provide even more elective choices. Though she noted that approval from the undergraduate council is needed for any official changes to be made, it’s “currently in the works.”

“That’s what the major is when you look at how it compares to sustainability majors across the U.S.,” Andrews-Brown said. “We are working on rebranding the program — a lot of it is going to be the same, but the way students choose their electives and things like that will be even more personalized and customized than it is.”

Along with serving as the adviser and coordinator for the program, Andrews-Brown also teaches a writing course titled “Communication for Environmental Professionals,” and oversees all internships that occur within the program.

She said the course is mainly focused on professional and skills development, where she only assigns writing pieces that will prepare students for the business world. Andrews-Brown said she does not want students to have a lot of work to complete outside of class, and brings in many guest speakers who are experts in areas such as grant writing and resumé or cover letter writing.

“My classroom is really personalized,” Andrews-Brown said. “While everyone is doing the same thing, students are moving at very different rates and starting from very different proficiencies. I work with students at the pace they need.”

Melanie Malsch, a Pitt alum, took this course as a junior and worked as a teaching assistant as a senior. Malsch worked closely with Andrews-Brown during her time in the environmental studies program, and said Andrews-Brown made sure she got “what she wanted” out of her degree.

“She contributed and added so much to the experience, which was not asked of her,” Malsch said. “She was just doing that to support and she ended up being a big part of it.”

After Andrews-Brown helped Malsch coordinate the workshop, she brought in her husband to speak as a guest lecturer for the writing course. A former Penn State assistant professor of geography and research associate, he led a science-based study abroad program during his time at Penn State called “Parks and People.” She connected Malsch and her husband to talk about shared experiences abroad and international education perspectives, which Malsch said was very impactful.

“She enabled me to really broaden my horizons and my perspectives on how impactful that experience [studying abroad] could be in that field even though it’s kind of unconventional,” Malsch said. “She encouraged me in this side passion that I had because of my own personal experiences and helped bring it to be related to my degree.”

Samuel Cohen, a senior environmental studies major, is another student and advisee of Andrews-Brown. Cohen said she wrote him letters of recommendation for his graduate school applications and “always” tailors a student's path within the major to their own interests.

“She was more than willing and happy to basically tweak the major, write exceptions for things, get exemptions for things, so I could take classes that would be a little bit better suited for my personal goals, and she does that for everyone,” Cohen said.

Andrews-Brown is also a founder and co-chair of the environmental studies department’s diversity and inclusion committee. The committee is in the process of hosting listening sessions to derive solutions for issues brought up in a survey that was open to all members of the department.

“There’s been a recognition that things can be much better than they currently are, and myself together with the rest of the committee are all working together to make the department a place that people feel comfortable and welcome,” Andrews-Brown said.

According to Andrews-Brown, she has managed to engage in very positive interactions with students over the past five years working at Pitt, which she does by ensuring that students don’t become too overwhelmed with work.

“If something is happening in their lives, I can talk to them about what accommodations need to be made in order to ensure they have a successful semester,” Andrews-Brown said. “I know that they know that I care, and that’s most important to me.”