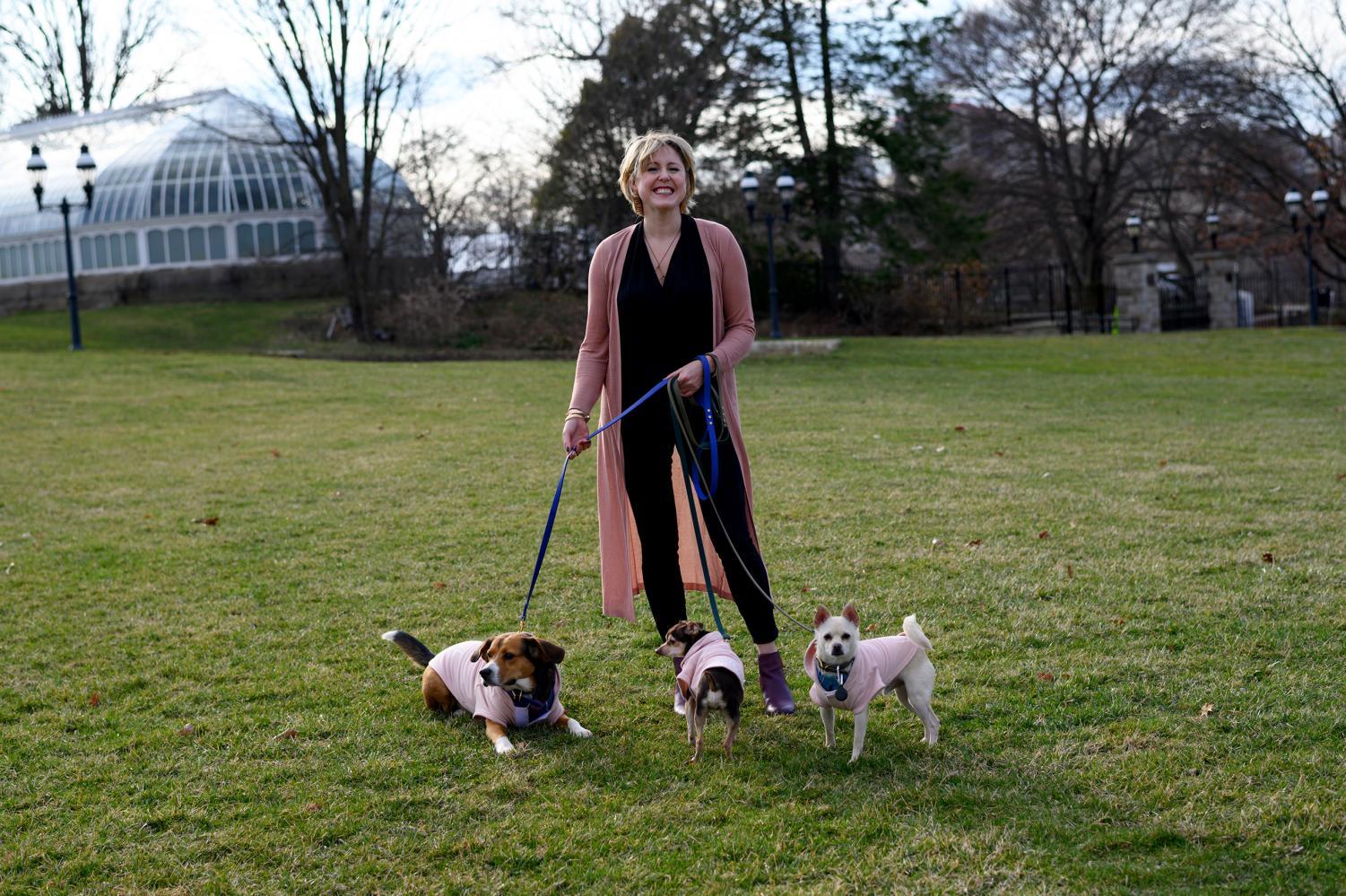 The journey into gynecology, obstetrics and family planning for Dr. Colleen Krajewski began with the promise of free pizza as a young medical student.

Krajewski graduated from Pitt’s medical school in 2007, and said students used to get emails about offers of free pizza during lectures. She and her friends decided one morning to attend a lecture on abortion care, and knew immediately that her initial interest in surgery would pivot to the gynecological field.

“I was in the back of the room eating this pizza with my friends, and this woman was at the front and she was talking about how one out of three people have an abortion,” Krajewski said. “I just remember being like, ‘Whoa, how are we not talking about this?’”

More than a decade later, Krajewski now serves as an assistant professor at Pitt’s medical school. She is also the medical director of gynecology at the VA hospital, a gynecologist and the director of the Center for Contraception and Family Planning at UPMC Magee-Women’s Hospital.

After completing her medical degree at Pitt, Krajewski went to complete her residency at Cleveland MetroHealth Medical Center, followed by a fellowship at the Johns Hopkins University School of Medicine. But when she was looking for a place to settle into her work, she said Pittsburgh was immediately on her mind — not just because it was familiar, but because of the region’s pressing need for abortion care.

“[Abortion] access is limited in this part of the country, especially for hospital-based abortion services that we're able to do. So we have places like Ohio and West Virginia, that have quite limited abortion access in general, but then specifically limited abortion access for people that need a higher level of care,” Krajewski said. “So the reason I'm here is because I’m able to serve a lot of people. And that was important to me.”

“Given increasing restrictions on abortion care in the U.S., especially in surrounding states around Pennsylvania, Pittsburgh ends up being one of the few places that patients from Ohio or West Virginia can go to receive care, because of the laws within those states, and the limited number of providers who are able to provide the care there,” Chen said.

Krajewksi is one of the few providers in the continental United States who provides second-trimester abortions, which occur between 15 and 23 weeks of pregnancy. These abortions are also called surgical abortions, and are more physically invasive procedures than abortions performed in the first trimester.

Krajewski said she sometimes comes home from work covered in the tears of a patient after a particularly harrowing procedure. For those in this field of work, coming home at the end of the day can be quite jarring, but figuring out how to handle this is a part of the job.

“I used to come home covered with these smears of tears as you're holding someone as they cry. Then you get home and someone's telling you about how Aldi’s was out of tomatoes,” Krajewski said. “And I am not here to diminish someone else's struggles, but you have to find a way to make peace and find value and purpose in what we're doing.”

This can be especially hard with so many myths and misconceptions out there about gynecological health and family planning. Particularly, there’s not a lot of information people know about LGBTQ+ health in these fields, according to third-year Pitt medical student Sabina Spigner.

Spigner has shadowed Krajewski, and takes an interest in LGBTQ+ care in gynecology and family planning. She said Krajewski makes a concerted effort to be inclusive in her terminology.

“Gynecology is a field that has historically, and currently is still kind of a women's health field,” Spigner said. “You can learn a lot from people like Dr. Krajewski and others doing important inclusive work, how to navigate those spaces, and use inclusive terminology and provide affirming care, and a safe environment in a way that helps people who might not identify within the [gender] binary.”

Springer designed a project with Krajewski the summer between her first and second years of medical school, structured around surveying UPMC OB-GYN clinics on their inclusivity for gender minority patients. She said because of Krajewski’s connections in the field, the project was a success.

“Dr. Krajewski connected me with a lot of people to get the survey out there into the clinical space so that people could take it,” Spigner said. “And without that connection, the project definitely would not have even been able to happen.”

Sarah Lim, a fourth-year resident in Pitt’s psychiatry program at UPMC Western Psychiatric Hospital, has known Krajewski for 10 years. The two met when Lim worked as a research assistant at the Center for Family Planning.

Lim said she appreciates how she and Krajewski have connected, despite having specializations in different fields of work.

“Student-faculty mentorships don't always span the way that you think they would be. I'm in psychiatry, she's in gynecology, but it's been such a fruitful, rewarding relationship over the past 10 years,” Lim said. “Those relationships are out there if you find them and I just really appreciate her. She's a great asset to our education program.”

Even more so, Krajewski isn’t ashamed to speak about her work in her personal life. Krajewski got a tattoo in 2016 on her arm of a coat hanger with the words “never again” written inside. It’s the kind of tattoo that she said is getting increasingly more common with people who work in abortion care — especially after Trump challenged Roe v. Wade by his appointment of Amy Coney Barrett to the U.S. Supreme Court.

“It’s actually kind of a funny story. So I got it on the day Trump was inaugurated. Those of us that have been following this for long enough knew Roe is going away in our lifetime,” Krajewski said. “So all these people that are like, ‘Oh my God, how did this happen? What can I do? How can I stop it?’ I'm like, ‘Where have you been?’”

When discussing her work in casual settings, Krajewski said people often have so many misconceptions about gynecological health that it’s impossible to address them all. But in no way is her work the same every day.

“Sometimes people think that OB-GYN is going to be like babies and balloons. And it's not — gynecology is love and sex and hope and fear and betrayal and all your hopes and fears and dreams and it can be really not okay,” Krajewski said. “I have patients who are so traumatized, even by bleeding every month based on their past experiences. We have patients that are coming to us on the worst days of their lives.”

But whether the day at work has been terrifying or beautiful, Krajewski said she does her best to find enjoyment in the simpler things in her life. She spends as much of her free time as she can with her dogs, and often takes them on long hiking trips.

“We do backpacking, kayaking, camping, hiking,” Krajewski said. “The overnight backpacking with three dogs solo has been a great pandemic thing to do. I’ve really been enjoying that.”

Lim said Krajewski has always been open and welcoming when talking about the things she loves, and goes out of her way to support the students she becomes close with — in both their professional and personal life.

“One of the things that I just love about Colleen is how much she is an awesome mentor inside of the professional realm, and also outside of it,” Lim said. “Seeing her come to my graduation from medical school was really, really sweet. She showed up and sat in my family section and was really supportive of my graduation. I appreciated that a lot.”

When Krajewski is teaching students, she said what she wants more than anything is to emphasize the need for compassion and understanding when working with patients. Because working in this field is never straightforward, no one patient will ever be the same and everyone should do their best to provide the baseline care people deserve.

“‘I would never have an abortion’ is the most common thing that you'll hear people say. And then people are sitting in my office having an abortion, and they hear their past self saying those things out loud,” Krajewski said. “And again, I'm no therapist, I'm not going to get there with somebody in a 20-minute visit, but allowing space for that growth in a way that is non-judgmental, and not hostile is really important.”