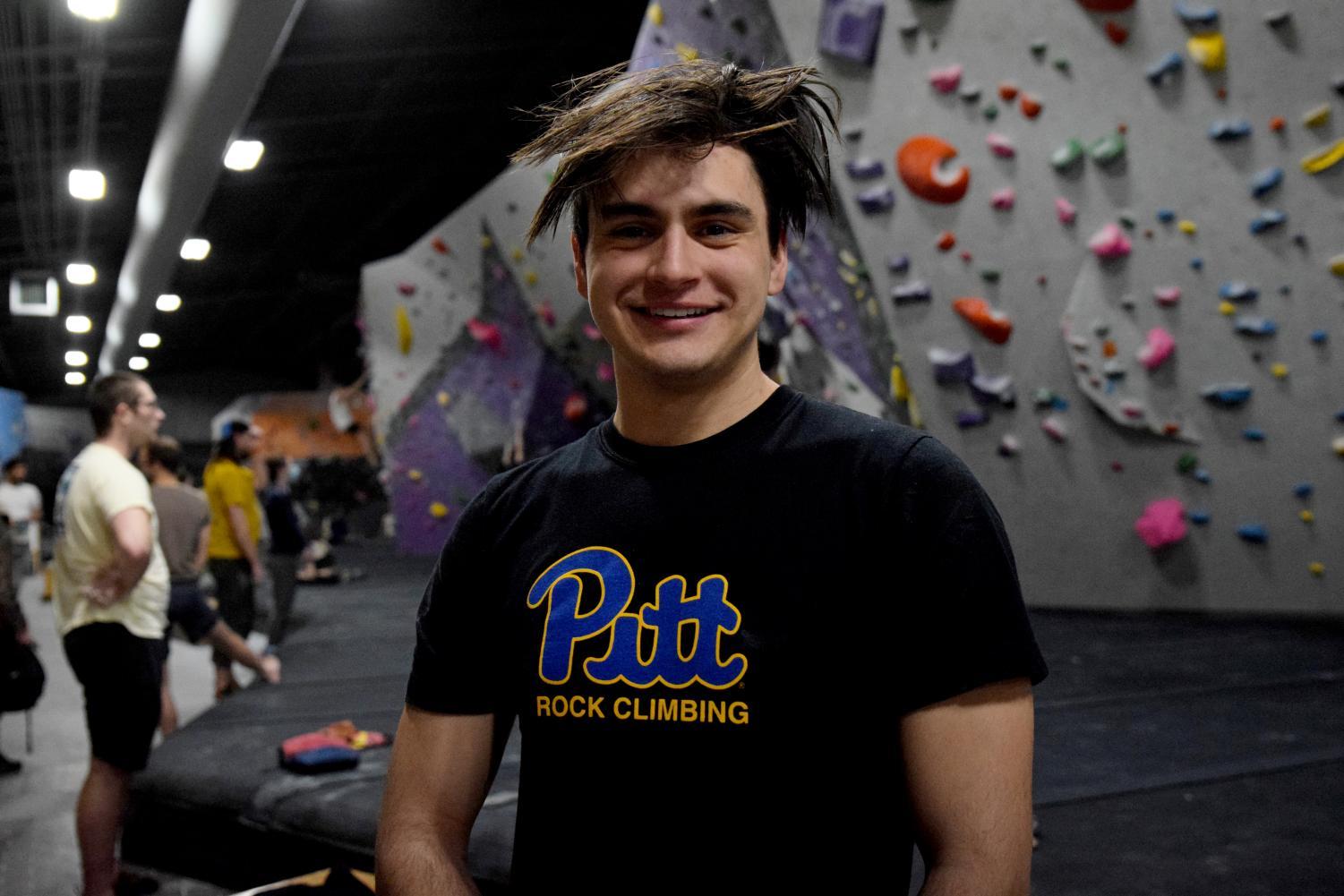 Brandon Brewster: A leader who loves the climb

Walking into Market Central during his first semester at Pitt, Brandon Brewster probably didn’t expect to discover one of his passions when he stumbled upon a sticker.

“I saw a kid with a water bottle with stickers on it and I recognized the climbing brand,” Brewster said. “I was like, ‘Yo, do you know if there's climbing at Pitt or anything?’ And it turns out that he was actually on the team and that tryouts were later that day.”

Brewster tried out and made the climbing team a few days later. He has since devoted much of his time to being an active member of Pitt’s co-ed competitive climbing team, leading the organization as president since Fall 2020.

Becoming president only a year after he joined the club wasn’t his initial plan, but COVID-19 policies barred the former president from holding the position, so Brewster decided to run for the position.

“I was nervous,” Brewster said. “It's difficult to run because we do so much. Everybody loves the club so much, we want so many activities to be done, I had not run any kind of club yet and obviously, we were also going through a pandemic.”

Brewster has led the climbing team ever since, and said he enjoys the sense of community it provides to members.

“I've never felt more welcomed or supported by a group of people,” Brewster said. “Everybody that climbs, joins the climbing team or shows any interest is just very wholehearted and wholesome.”

To prepare for upcoming divisional and national competitions, the team has been practicing three times a week and doing hangboarding finger strength exercises. According to Brewster, he initially liked the intensity of climbing to replace the competitiveness of high school swimming while he was in college.

“I really liked falling into a set training plan,” Brewster said. “When I discovered that climbing could fill that gap, I really enjoyed that, because it would give me a mental break from school, but also climbing comes along with a great connection to the outdoors as well.”

While the team holds its weekly practices at the Ascend Pittsburgh indoor climbing facility, team members also travel to parks like New River Gorge or Coopers Rock in West Virginia to climb outdoors for weekend trips.

“We can also go to these sick places, like parks and national parks, and really just hang out and enjoy the scenery,” Brewster said. “So there’s a lot of benefits besides how cool it is to just hoist yourself up with your fingers.”

Brewster has kept himself busy during his time at Pitt, studying environmental science with minors in environmental engineering and studio arts and certificates in geographic information systems and sustainability. He is also a member of Epsilon Eta, an environmental honors fraternity, and works with professors conducting undergraduate research on green infrastructure.

According to Daniel Bain, an associate professor of geology and environmental science who works with Brewster on his research, green infrastructure takes a sustainable approach to water and resource management which mimics natural environments.

Green infrastructure on campus includes rain gardens at the Cathedral of Learning and Petersen Event Center. To study the concentration gradients of the elements in this soil,  Brewster employed a new technique involving an X-ray fluorescence spectrometer.

“I would take a bunch of samples along the green infrastructure,” Brewster said. “Basically, it looks like a big laser tag gun. You point it at the ground for two minutes, and it tells you what's present in the first few centimeters of topsoil.”

“We couldn't meet in person, and we had this huge competition to complete,” Brewster said. “I was basically awake for three days finishing it.”

Brewster’s team placed second in the nation in the competition and he said the payoff from the hard work was worth the initial turbulence.

“It was kind of nuts,” Brewster said. “I think that really shaped a lot of my work ethic, at least because it used GIS and things like that, and I hadn't really done a large project like that on my own before.”

Although Brewster recalled the experience being somewhat chaotic, Aaron Carr, a senior environmental science major and member of the RainWorks team, said that Brewster thrived in a leadership role.

“A lot of academics and skills that we've been taught in the classroom were called forward for this project,” Carr said. “Brandon was happy to jump into that, he was excited to form a team, and throughout the whole process, he was definitely a leader in terms of effort organization and making sure everybody was on track.”

Carr, a lifelong friend of Brewster’s, has worked with him on many different projects and assignments at Pitt. He said Brewster has been a great and supportive friend along the way.

“He's always there if you need help, and because of that, it's been really awesome to go through school together,” Carr said. “We've been very supportive of each other, and I look back on the last four years, and I'm really glad that he was there for us to get through this together.”

After graduating, Brewster said he plans to do environmental and conservation work in national parks out west, possibly as an ecologist, or work for the Carnegie Museum of Natural History. Brewster said he sometimes wishes he wasn’t always in a leadership role.

“Sometimes I feel like I could have done a little bit more of just sitting back and participating instead of running,” Brewster said. “I wish I would have had more time to do more clubs, too, but yeah, there's only so much time.”

Even though he’s been involved in numerous other organizations and academic pursuits, Brewster said he owes much of his personal growth to the climbing wall and those who scale it with him.

“I don't know who I would have become, without the climbing team,” Brewster said. “Whether that's just being a member and a climber, or being president, and trying to provide great experiences for everybody else in the club that I loved getting as well.”