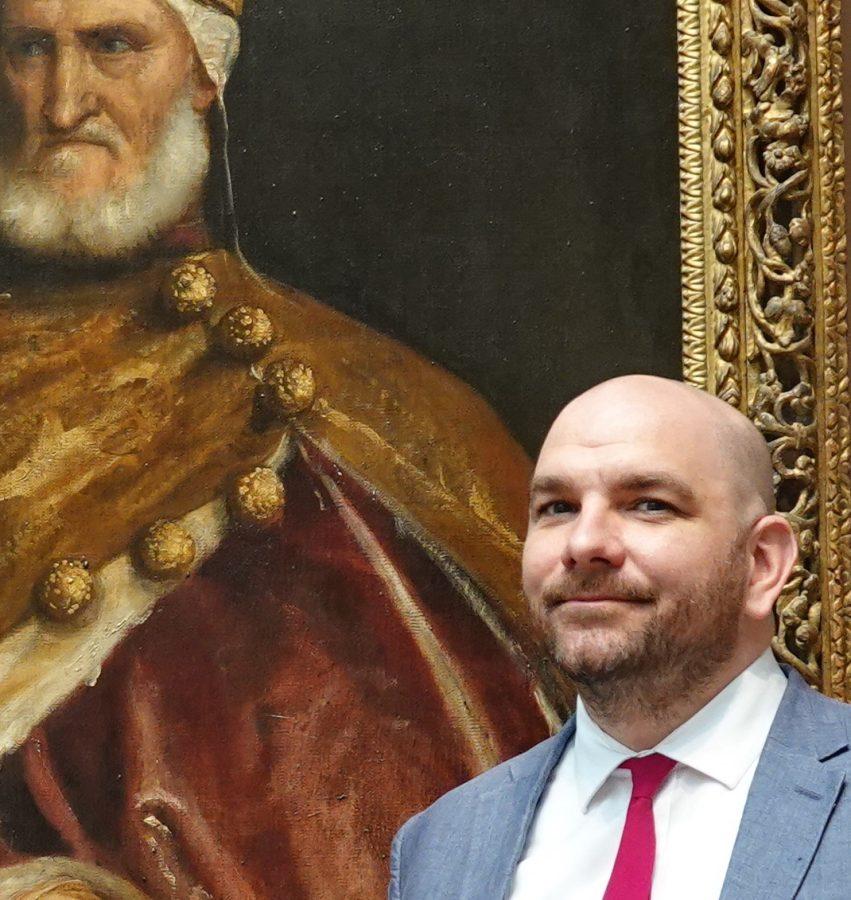 Pitt associate professor Christopher Nygren, a member of the Medieval and Renaissance Studies program, first received a copy of his award-winning book, “Titian’s Icons: Charisma, Tradition, and Devotion in the Italian Renaissance,” at the start of the COVID-19 pandemic in July 2020.

“It was a Friday afternoon, at about five o’clock. There were three boxes on my doorstep, and it was my book. And I was like, ‘Oh, okay, I guess it’s published.’ So it was a very weird moment, because you couldn’t quite celebrate,” Nygren said. “It felt inappropriate to be celebrating personal accomplishments in the middle of a pandemic.”

Despite the initial anxiety surrounding his book’s publication, “Titian’s Icons” would receive critical acclaim from academic circles following its release. It received the Phyllis Goodhart Gordan Prize, the biggest prize for Renaissance scholars in the United States, in 2022.

Nygren’s book focuses on Titian, an Italian painter from the Renaissance. Considered one of the most influential artists from the 16th century, Titian is often regarded for his work in mythological paintings featuring depictions of Greek or Roman gods like Zeus or Diana.

But Nygren’s book, which tracks Titian’s life and work, focuses on how Titian’s life and art shifted after one of his paintings, “Christ Carrying the Cross,” supposedly began to make miracles. According to Nygren, the church thought this painting performed miracles, such as saving babies or sailors from shipwrecks.

“It’s saving babies that were stolen from their crib by wolves, sailors who are in shipwrecks and a guy who gets into a knife fight,” Nygren said. “And for him to have been perceived as having produced a picture that could do these things. That’s a really radical and strange assertion to make about a 16th century painter. In fact, there is no other painter in the Western tradition that is credited with having made a miracle-working icon during his or her lifetime.”

Nygren’s book also focuses on how the subjects of Titian’s paintings changed to Christian and biblical stories. Nygren said he tried to point out that Titian wanted viewers to react well to his paintings, even if they weren’t familiar with the biblical stories.

“[The paintings] can sometimes seem a little bit off-putting, because they’ve got Jesus in the center. And if you don’t know the story, maybe you don’t know what’s going on. Maybe you’re not a religious person, so you don’t really care,” Nygren said. “But what I try to show is that he read the Bible very attentively. And he thought really deeply about how somebody standing in front of this picture is going to react to it.”

“Titian’s Icons” came out of the dissertation Nygren finished at Johns Hopkins University in 2011. His dissertation, which also focused on Titian, served as a rough draft for this book.

Mrinalini Rajagopalan, an associate professor and chair of the history of art and architecture department, said many professors build off their dissertation to produce their first book. But with their second book, professors have to start from scratch.

Rajagopalan, who is currently in the process of writing her second book, said she has exchanged excerpts with Nygren and vice versa.

“When writing the Ph.D. we have a lot of people who give us feedback 一 our committees or advisers, or even our colleagues who are also in the same graduate program,” Rajagopalan said. “But in the second book, you’re starting the project on your own, you’re writing it on your own. It’s a much more lonely experience. So having someone offer to read your book is really valuable.”

David Marshall, a professor in the department of communication, partnered with Nygren when writing their books in 2018. Marshall said the experience benefitted his book.

“We gave each other suggestions and moments when what we were saying really landed with each other, and opportunities to enlarge points or do things a little differently,” Marshall said. “It was super productive and very invigorating and a form of mutual solidarity and support.”

Nygren said learning to share parts of his book was one of the hardest parts of the writing process. Despite how common it is among professors, Nygren said he was grateful for the support.

“That has really, genuinely changed my writing practice, and so much about who I am is learning to ask for feedback on it,” Nygren said. “So we went back and forth, chapter for chapter, and it’s really hard to expect somebody to read 100,000 words that you have written 一 it’s extremely generous of people to do that.”

Rajagopalan said Nygren has a knack for making his writing accessible to everyone.

“To describe him in one word, I would have used the word charismatic. And it’s really interesting that charisma is one of the keywords that appears in the title of his book,” Rajagopalan said. “In the sense that he is able to translate very complex ideas from a field of study that was quite far away from mine. Into ways that were not only exciting, and compelling, but also in a way that I felt mattered.”

Marshall said one of the ways in which this book excels is how it shows how Titian’s paintings impacted the people who viewed them.

“This is a book that really shows us a number of different ways in which images do work in our lives,” Marshall said. “It’s not just a small kind of treatment of what Titian was doing with painting — it also enlarges that to help us understand what kind of work we do with images as viewers.”

Nygren said he was grateful to be a part of the Medieval and Renaissance Studies program at Pitt, and pointed out that two Pitt professors have won the Goodhart Gordan prize in the last decade. He said the Pitt professors in the program produce exceptional works he hopes the University takes note of.

“[We] have fan-fucking-tastic faculty who are doing really important and good work that is being recognized by their peers,” Nygren said. “And I really hope that the people in the Cathedral are taking note of the fact that MedRen at Pitt punches way above its weight and is producing cutting-edge scholarship.”