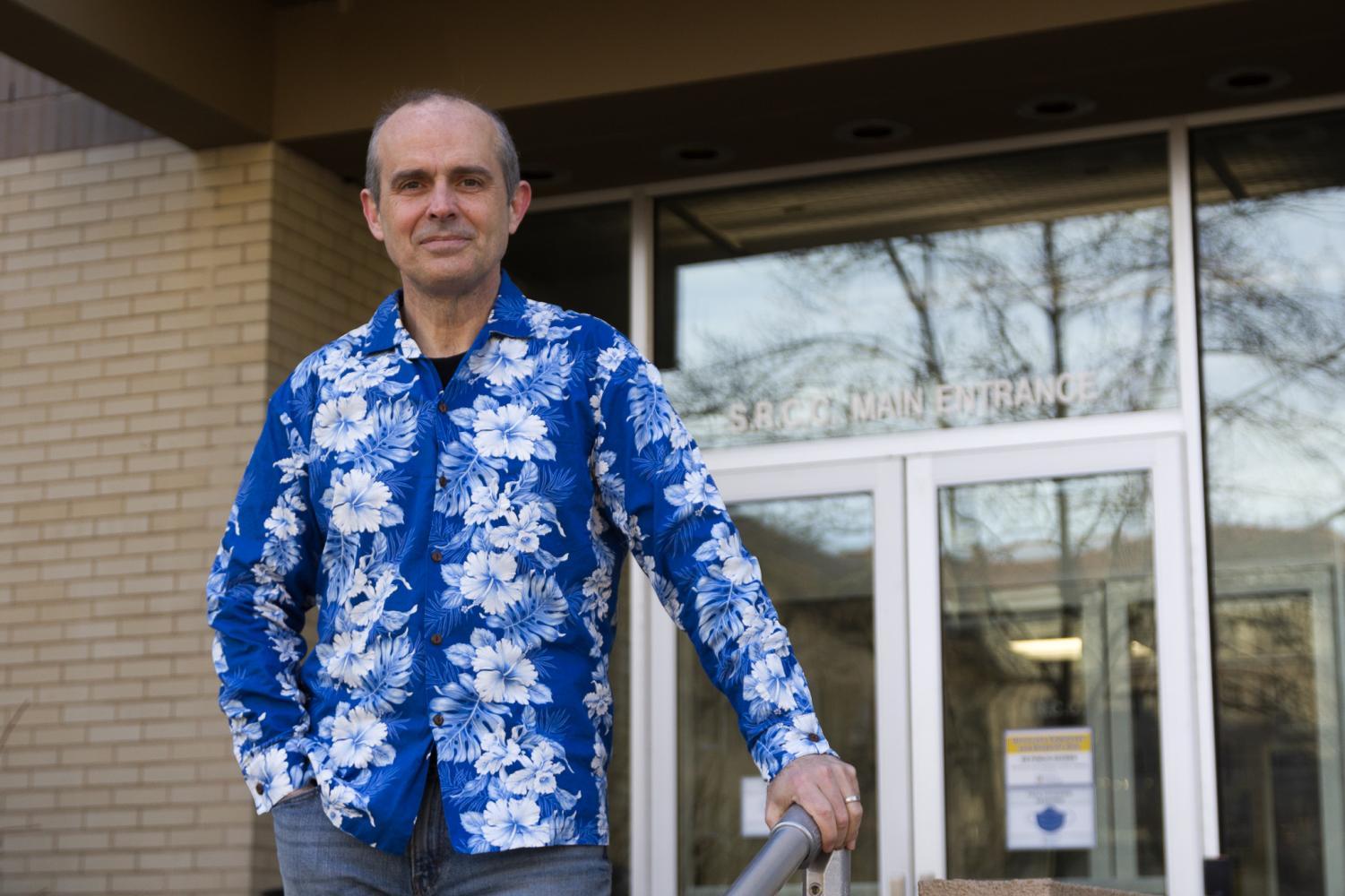 Ward Allebach: Rolling with the punches

Ward Allebach is a major force behind sustainability at Pitt, but beyond his groundbreaking work, students also know him for his passion, humility and Hawaiian shirts. Seth Bush, a 2012 Pitt alumnus, still keeps in touch with Allebach and thinks fondly of his wardrobe.

“One of the first classes, he's in his Hawaiian shirt — which is every class — standing up on a desk, orating about something,” Bush said.

Allebach, an instructor in the geology and environmental science department, has taught Pitt students how to make real change in their community since 2002. In his sustainability class, which he developed in 2008, Allebach guides students through projects aimed at improving sustainability on campus, which often last beyond just a semester-long course. Students pick up projects from previous classmates, so initiatives can continue even after their initial creators may have graduated.

“Our students are transient here. They're here for four years, and then they're gone. The work that needs to be done on campus is not,” Allebach said. “Students do the work, but they build for the future at the same time. And by doing that, projects tend to morph from students to students to students as time goes on.”

Clubs and initiatives that are now campus fixtures — such as the University of Thriftsburgh, Forbes Street Market and receiptless transactions at University food vendors — started as projects in Allebach’s class. According to him, all the credit goes to the students.

“I can't even begin to tell you how proud I am of the students that I've worked with. And it really is all about the students. I do what I can to inspire them and empower them, but really, what actually gets done is all them,” Allebach said.

Under his mentorship, several former students have gone on to their own careers as environmental advocates. Bush worked for the Sierra Club, a grassroots environmental organization, for six years, and now provides leadership coaching to activists through the Radical Support Collective. Eva Resnick-Day, also a 2012 Pitt alumna, worked as an organizer for 10 years at the Sierra Club, Greenpeace, Green Corps PennEnvironment and more and now works for the Pittsburgh Cultural Trust.

Both Bush and Resnick-Day were members of Free The Planet, a campus environmental club, for which Allebach was — and still is — the adviser. Resnick-Day recalled that during her time in the club, she had the idea to start the Pitt Green Fund as a way to finance student projects. While her fellow students questioned whether her idea was realistic, Allebach was the only person who didn’t dismiss it.

Resnick-Day was able to successfully start the fund, which still exists today.

“At the beginning, basically everyone laughed me off, and was like, ‘We'll never be able to do that on this campus.’ And Ward was one of the people who didn't. I think he's just someone who really believes that change can happen,” Resnick-Day said.

Allebach’s own advocacy career began in the late ‘80s when he was working as a journalist in Cape May, New Jersey — a coastal town at the southernmost tip of the Jersey Shore, which at the time was suffering its own environmental crisis.

“There were dolphins washing up dead on shore, red tides, there were a lot of sewage spills, a lot of stuff that really made a lot of news,” Allebach said. “[Since] it was an ecologically sensitive area, I wrote a lot about those things. I got very interested in it.”

Allebach left journalism and Cape May to begin a master’s program in environmental studies at California State University, Fullerton. While living and studying in southern California, he also  started a nonprofit called Green Networking for Orange County and, in 1995, began teaching classes on environmental advocacy to other students at Cal State Fullerton.

Both of Allebach’s parents were teachers, but he never considered an education career for himself because he saw his father struggle to enjoy his work.  But when Cal State Fullerton gave him the opportunity to teach a class, Allebach realized he loved working with students to help them reach their goals.

“I really got a bug for it. I think it's very largely because of the nature of the work, because it's really incredibly gratifying for me to be able to work with young people on things that they are passionate about,” Allebach said. “To be able to see them accomplish things is really empowering.”

Allebach moved to Pittsburgh in 2000 and began teaching at Pitt two years later. His courses have always centered around student-led projects, which oftentimes push for change in University policy. Allebach recalled the resistance he and his students felt from administrators in the early 2000s, which often made it difficult to enact change.

“Back in 2002, there was a large institutional resistance to that kind of change. And very often, students would go to University administration to advocate for change,” Allebach said. “First of all, the University was not very accessible. And when they finally did get through to people, after spinning their wheels for weeks and weeks and weeks, the response was very often ‘f— off.’”

Allebach said he has seen attitudes improve drastically over the past two decades, with higher-ups becoming much more receptive to sustainability initiatives. He attributes this change in part to the hiring of sustainability-focused staff members, from Aurora Sharrard, the University-wide sustainability director, to Erika Ninos, the sustainability program coordinator for PittServes.

“That gives students in my classes now easy access to decision makers and change makers on campus, and they can work together a lot better than they ever could before. It's not as much of an uphill struggle,” Allebach said.

As Allebach worked to change the University’s attitudes toward sustainability, his guidance also changed the way his students approach sustainability. Simon Joseph, a senior environmental studies major, took Sustainability Flash Lab with Allebach, a class that pushes students to make sustainable changes to their daily lives.

Joseph said his experiences in the class changed how he thinks about the world.

“I didn't know anything about sustainability. At least, I thought I knew something, but Ward quickly showed me that I did not,” Joseph said. “I've never turned on a light, taken a long shower, eaten meat, anything like that without always double checking myself because of that class.”

Allebach said his classes often have a similar effect on students — making them realize the gaps in their knowledge, then working to fill in the cracks. He added that it’s hard to start new projects without understanding the work that campus leaders are already doing to improve sustainability.

“There tends to be a lot of misperceptions, students who come in and they're angry about what's not being done on campus, without really understanding what is being done on campus,” Allebach said. “I want you to pursue what you want to do. But if your ideas don't change over the first three, four, five weeks of the class, then you haven't done enough research.”

While challenging preconceived views about sustainability, Allebach also focuses on teaching students the real-world skills needed for environmental activism — including how to roll with the punches.

Allebach works with students to coordinate Pitt’s annual Sustainability Symposium, an event with guest speakers and student research presentations. Resnick-Day recalled that before the 2012 symposium was set to start, campus shut down due to safety concerns from a series of bomb threats that year. The guest speakers weren’t allowed in campus buildings, so Resnick-Day and her classmates rushed to get a space on CMU’s campus at the last minute.

“Ward afterwards looked at us and he was like, ‘I didn't think that was gonna happen. You made that happen.’ And so I think there's been this mutual learning,” Resnick-Day said. “And I think that that spirit has lasted in our friendship.”

Allebach’s passion for sustainability has left a lasting impact both on campus and in the lives of his students. But he cautioned that even the most passionate people have their limits, and when it comes to activism, self-care is essential.

“If you put your heart and soul into it all the time, every single day, 24/7, you're going to burn out and then you're not going to be good for anybody. You have to be able to take care of yourself and you have to have a level of awareness in order to keep a handle on that,” Allebach said.