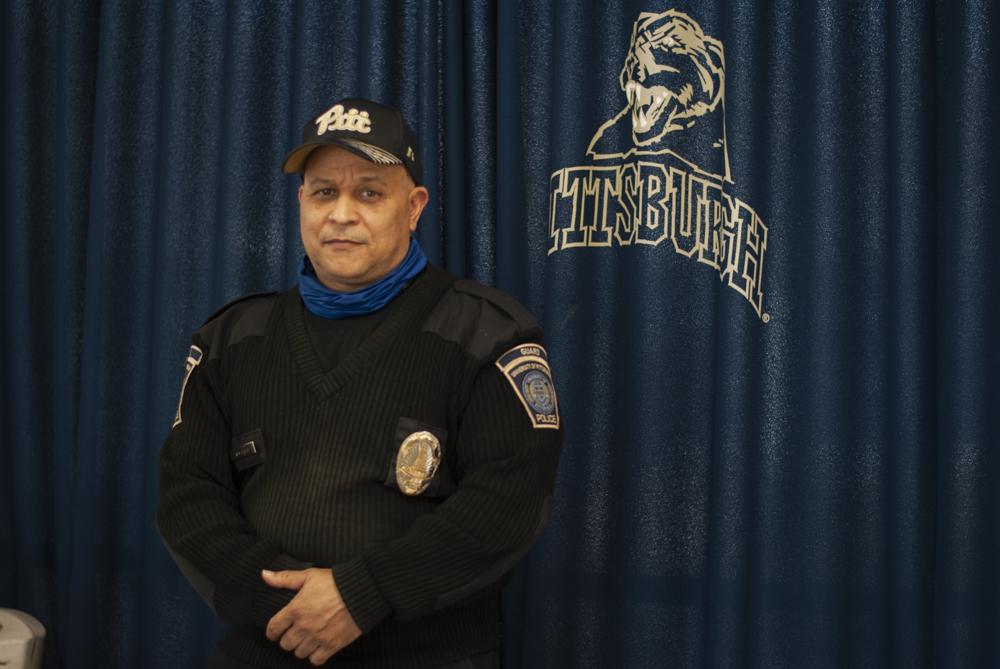 One cold, snowy night on Feb. 5, 2006, Tyrone Carter arrived at Pitt for his first shift as a campus security guard. The Pittsburgh Steelers went up earlier that day against the Seattle Seahawks in the Super Bowl — and they won. Excitement brewed all around the city, but in Oakland, the celebration played out a little differently than elsewhere.

“I was on Sunday nights at the Hillman library. It was the Sunday the Steelers were in the Super Bowl. We had to start at 6 o'clock. So I was in all this mess,” Carter said. “But when they won, in Oakland, they were turning cars over … they were spinning them. Couches burning in the middle of the streets. They busted windows. We had to lock the library, and that was my first day on the job.”

Despite his turbulent first day working for the University, Carter has remained a loyal employee for the past 16 years — and still continues to be a local sports fan. Carter laughingly declares, “Steelers, Pirates, Pitt. I’m always local,” but he will not work on another playoff game date.

Prior to his time at Pitt, Carter grew up in nearby Homewood with his five brothers and sisters. After graduating high school, Carter enlisted in the army, and was stationed at Fort Bragg, North Carolina. Carter said the time he spent in active duty was a relatively stable period, so he wasn’t directly exposed to the terrors of war. Regardless, his six years in the army still influences him today.

By the age of 23, he was a father to three young boys — Tyrone Jr., Topaz and Mike. After leaving the army, Carter took up any position he could in order to support his family, and Kaufman’s department store hired him as part of the warehouse staff. Carter later worked at the Veterans Affairs Medical Center on upper campus as a program clerk in radiology and in the housekeeping department.

Although Carter enjoyed the work environment and nurses at the VA during his 20 years there, he decided to leave the position because the stress from housekeeping management became too tiring.

“Once I went there, everything got cutthroat,” Carter said. “Everybody’s military, so the management part, they still wanna be gung-ho. You get tired of all that.”

After a few years of working security details for Heinz Field football games, Carter made his way to Pitt — thanks to the recommendation of his nephew, Robert. Carter said he has remained at the University for so long in part because he enjoys the stability his position provides him.

“This is stress free. [The University] don't mess with us. Come to work, do your job, everything's good. Plus, I like working with the kids,” Carter said.

Although Carter has worked around campus for many years, he is most recognizable for his position as the security guard for the Trees Hall Fitness Center on upper campus, a position he’s held for so long that he's almost a part of the facility as the walls and ceiling.

Sally Sherman, an assistant professor of health and human development, began working for Pitt around the same time Carter switched his post to Trees Hall. She recalled the many ways Carter has looked after the community during the years they’ve known each other.

“He does things, like if students or faculty are leaving the building at night — many of us have taught a lot of night classes — he won’t let you walk to your car by yourself,” Sherman said. “He will even stand out there and watch you get to your car. He is always looking out for everyone. That’s just who he is.”

Sherman also described times when Carter would call after students who would come through the doors and accidentally shut them on professors. She said Carter would tell them to go back and apologize for not holding the door open.

“He’ll say, ‘That’s Dr. Sherman! You turn around and you go open that door for Dr. Sherman,’” Sherman said.

Carter’s caring nature shines through in the way he often does seemingly small things to make the people around him happy. Before his dog’s passing in 2014, Carter said he would bring Little Bow Wow with him to work on weekends when children’s groups would use the facilities.

“He would sit up here with me because I was working weekends. And I will let him run in the back because we had little kid programs coming in. They loved him,” Carter said.

Carter’s role in Trees Hall became more appreciated a few years ago when he took an unexpected leave of absence.

Carter was playing basketball after work one day, an activity he would regularly do, but this particular game took an unexpected turn. He ruptured his quad and had to get stitches on his leg, just below his knee, and spent a week in the hospital.

Sherman said while Carter spent time recovering from his injury, Trees Hall was in a “frenzy.”

“We walk in and sure, it’s another great security personnel, but they’re not Tyrone. It’s literally the buzz in Trees Hall. When he’s not there, it’s an enormous loss,” Sherman said.

Unlike other security guards in University buildings such as Hillman Library and the Cathedral of Learning, Trees Hall requires much more attention to detail and expended energy. Since he is the only guard for the building, Carter is responsible for making sure all faculty members and students are acting appropriately and safely. Despite having the ability to choose a different post annually, Carter continues to renew his position in Trees.

Commander Shawn Ellies, director of security and emergency management at Pitt, has known Carter since they both attended Westinghouse High School — located in Pittsburgh’s Homewood neighborhood, a short bus ride from campus. Ellies said he has seen Carter’s dedication and eagerness to serve the community firsthand during the 16 years Carter has worked for Pitt.

“Guard Carter always volunteers for working other assignments. If there are extra assignments on campus, he is first to step into those roles," Ellies said.

When the campus security system went digital about six years ago, Ellies said Carter was keen to learn about the different tools and equipment he would have to interact with during his daily duties.

Carter’s role in keeping faculty and students safe goes beyond what’s necessary for his job. Though all campus security guards are trained in emergency response procedures, Ellies said Carter’s loyalty and familiarity with Trees Hall and the sports injuries that may occur allow him to handle intense situations.

“If a student is injured at Trees Hall, he is quick to contact first responders to respond to the injured student's location. He has training in CPR and first aid and has experience dealing with critical situations," Ellies said.

Carter said his job was just another part of his life, but Sherman said his presence in Trees Hall is more valuable than people, including Carter, fully realize.

“He sees what he does as unimportant,” Sherman said. “He has such an effect by being who he is, he doesn’t have to do anything crazy.”

Although Carter may describe his life as “boring,” his role in Trees is obvious to those around him. Sherman said without his efforts, Trees Hall would look much different.

“It is not a sexy building to be in. He is the only one — it is an enormous space, and when people sneak into the building, he has to go up there and chase people down,” Sherman said. “Again, it’s just about keeping the community safe.”