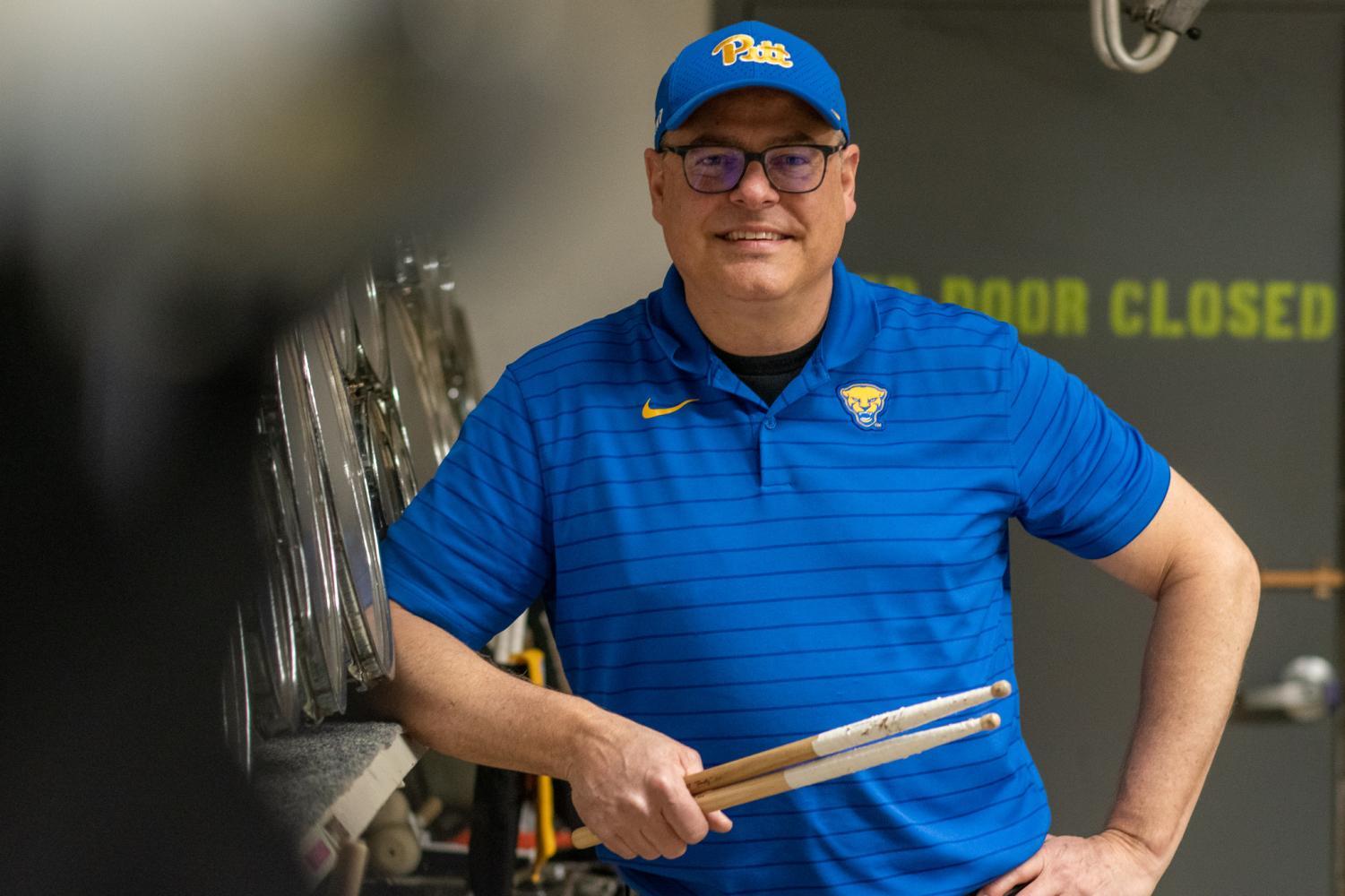 While Hartman’s friends were playing outside, he was learning an instrument that he didn’t much care for. But his father and mother made sure that their child would have music in his life at a young age.

“It wasn’t really inspiring,” Hartman said of the lessons. “But a seed was subconsciously planted.”

Clayton Hartman, Todd’s father, was the announcer for the Pitt band throughout Todd’s childhood. The elder Hartman began working with the band in 1953, and with the exception of a brief stint in the Air Force from 1957-60, didn’t miss a beat until his retirement in 2016.

Every so often, Clayton hosted band camps at Pitt-Johnstown during Todd’s middle school years. While the piano lessons didn’t stick for Todd, he developed a liking for the drumline and decided to join his father on his trips to Johnstown.

When it came time to head off to college, Hartman had little doubt about where he wanted to spend the next four years. Along with being from the Pittsburgh area, Todd wanted to play in the marching band — and he could do so alongside his father.

“I always knew I was going to go to Pitt,” Hartman said. “There was pride for the University of Pittsburgh by the time I was old enough to realize. Years and years of going to the old Pitt Stadium and seeing it packed — that did it for me.”

Hartman was initially enrolled at Pitt as an engineering major, but changed his major to music just before starting his first year. Despite being the only music major on the engineering floor of Litchfield Tower A during his first year, Hartman grew to enjoy college life in Oakland.

After graduating in 1990, Hartman enrolled in graduate school at Duquesne University, but couldn’t stay away from the Pitt marching band for too long. That summer, Hartman rejoined the program that he had spent four years with as a drumline instructor and ranger — working right alongside his father.

Working with his father helped bring the duo closer together. With all the time Todd had been spending on his studies, family time was sometimes a part of life that he had to sacrifice. Being on staff with his father had enabled the younger Hartman to get back some of that time, while still pursuing his passion in music.

“It was the Pitt connections that brought us back together. I always appreciated the time we had together and I felt proud to be on the same staff as my dad. We just really enjoyed our time together,” Hartman said. “He did his thing with the announcing and I did my thing with the drumline.”

Lou Rusiski, who has handled general operations for the band since 1985, worked with Clayton for more than 30 years. Rusiski still holds the same role for the band today, and has been able to work alongside both Hartmans throughout his career.

Rusiski said while there are some differences between the two, they had a similar effect on those around them.

“Clay was a calming influence — and same thing with Todd,” Rusiski said. “He exhibits a lot of Clay’s personality.”

Todd would remain on the Pitt band staff until 2005, when he left to take another significant step in his life — the birth of his first two children. Between the obligation to his family and job teaching music at Ambridge Area High School, there wasn’t enough time to continue his role with the Pitt drumline.

While Todd was away from the band, Clayton continued to do the same thing that he had since the early 1950s — announce. But after being a fixture for nearly 65 years at countless athletic events, Clayton soon stepped away and ushered in a new voice.

Todd began shadowing Clayton during the 2016 football season. Following his father around behind the scenes on gamedays not only gave Todd a better understanding of the job itself, but an even greater appreciation for his father and the impact he had on those around him.

Pitt Director of Bands Brad Townsend worked closely with both Hartmans during the transition period. Townsend said after working with Clayton, it was nice to see Todd shadowing his father and taking on the same duties that the elder Hartman had held for so many years.

“Todd is a Pitt band alumnus, so he knows all about the band,” Townsend said. “But it was kind of sweet to watch him work with Clayton as he was getting older and got to where he needed to be. That helped in a lot of ways.”

Todd noticed his father was familiar with nearly everyone in the press box, where media members and other behind-the-scenes staff gather at Heinz Field prior to kickoff. The vast quantity of people his father greeted prior to games initially surprised Todd. He emphasized this was one of his favorite parts of shadowing his father — getting to see all the connections he made over the years first-hand.

“That in and of itself was kind of cool because he knew everybody involved in the behind-the-scenes,” Hartman said. “He was a popular guy.”

Townsend also noticed both Hartmans worked well together during Todd’s time shadowing his father. Clayton was getting older, and having his son by his side in his final months on the job helped both with the process.

“You could tell he was taking care of his dad as well,” Townsend said of Todd’s time shadowing his father. “One of the things I noticed was that Todd knew exactly what to do, but what was kind of great was to watch him grow.”

Clayton eventually retired after the 2016 season. This was the beginning of not only a new job for Todd, but also not working alongside his father.

In his initial days working as the band's announcer, Todd was aware that people would question his filling the position formerly held by his father. This led to Todd’s first obstacle as the band announcer — finding his own voice.

Hartman initially felt like he had to replicate the voice of his dad to try and sound familiar. It took time and experience for Todd, but he eventually developed his own announcing style.

As Hartman continued to gain experience, he started putting more of a personal touch on announcing, instead of attempting to replicate his father’s signature voice.

“About halfway through [the 2017 season], I started becoming more of myself,” Hartman said. “I can remember Dr. Townsend saying ‘Hey, you’re starting to sound like Todd now.’”

As it turned out, “sounding like Todd” ended up being the key for Hartman.

Clayton passed away last August 2021, is remembered by generations of Pitt band members, staff members and fans alike. While Todd was able to put a personal touch on his work, he still felt his father’s influence. Even today, Todd continues to emphasize the word “varsity” when introducing the band at games — just as his father did.

“One of the things Lou wanted me to keep was emphasizing the word ‘varsity,’” Hartman said. “The transition from Clayton Hartman to Todd Hartman … I think you can hear in my delivery.”

Striking this balance has helped Todd become a recognizable voice to fans, while honoring Clayton.

“What has been great is that he is more and more comfortable,” Townsend said. “He’s putting his own personality in there — his own mark on the position.”

Hartman still holds the position of band announcer and loves every minute of it. He continues to teach music at Ambridge Area High School, where he is currently in his 22nd year. When it comes to his role at Pitt, Hartman has no plans of moving on from the school that helped make him the man he is today.

“I just look forward to just doing the same thing,” Hartman said. “I really enjoy it.”