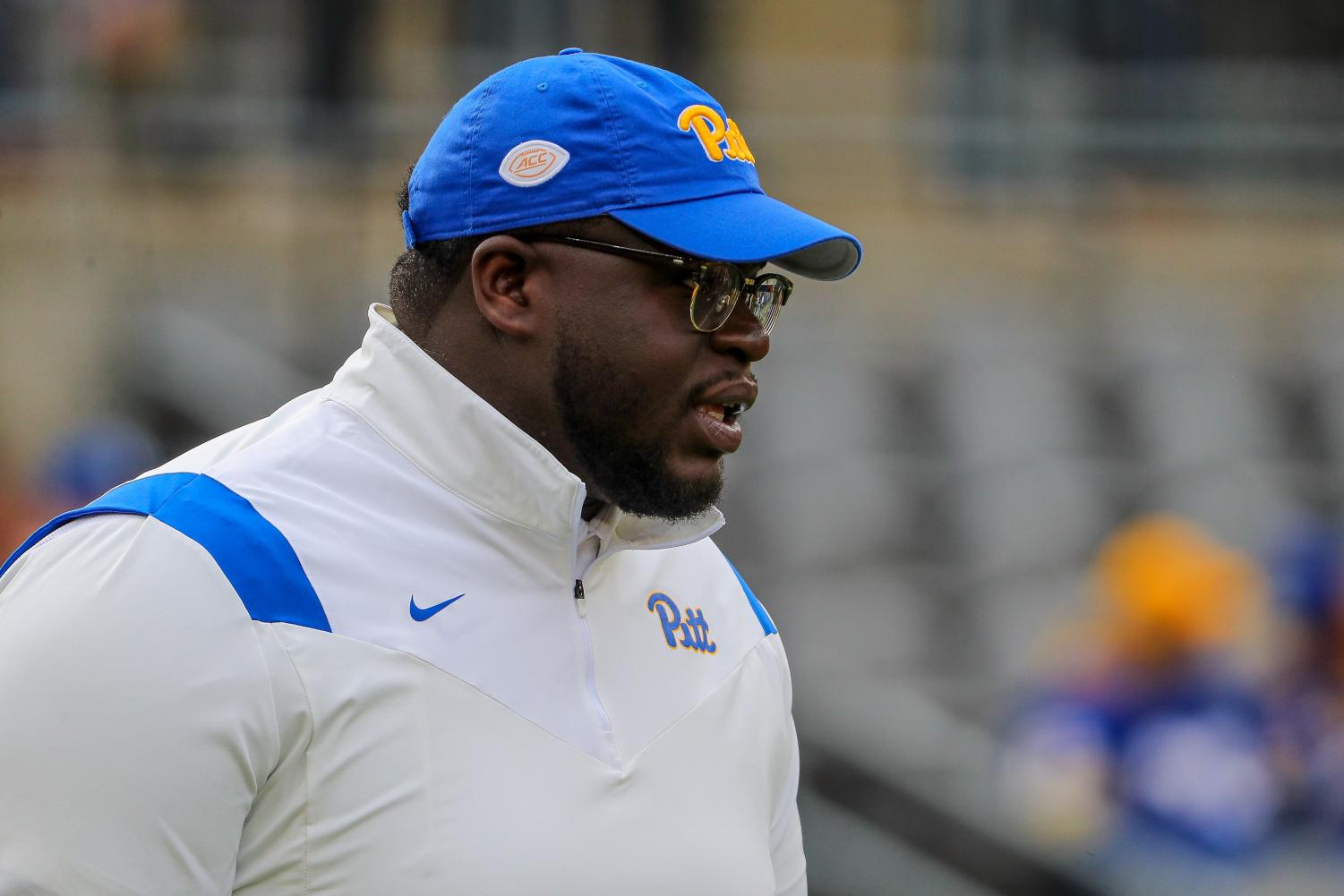 Former Pitt offensive lineman Alex Officer and his family sat stunned in the UPMC Hillman Cancer Center in September 2018. After going through a routine workout with the NFL’s Kansas City Chiefs, Officer’s knee swelled up to the point where he couldn’t walk. Upon further testing, doctors diagnosed Officer with osteosarcoma, a form of bone cancer.

According to his partner and “high school sweetheart” Elif Erturkmen, everyone in the room was sobbing — everyone but Officer. He sat calmly listening to the doctor, preparing to tackle this new challenge the same way he did every other time life presented him with an obstacle.

“All I could do was look at him, and he's just listening and taking everything in,” Erturkmen said. “All I could think about is, the least I could do is give him the same support, the same energy that he's giving all of us.”

The diagnosis dashed Officer’s hopes of playing in the NFL. But football was the last thing on his mind — he just hoped he’d be able to walk again.

“Once I found out the severity of what I had, I wasn't worried about football,” Officer said. “I was just hoping to walk again … I had a tumor on my knee, so a lot of people lose their whole leg.”

Members of his family said it would have been easy for him to take on a mindset that the world was out to get him. But he didn’t dwell on it. Officer said all the diagnosis did was open a new door.

“Going through all that, I think it just makes you a better person,” Officer said. “I don't think I got cheated out of anything. I just feel like another opportunity was given to me to accomplish my dreams.”

Officer’s love for football goes back to his youth, and he knew he always wanted to be around the game, he said. While he hoped he would play longer than he did, Officer also always hoped to coach when the day came. A little more than a year later, once his cancer was in remission without needing to amputate his leg, he began chasing that dream and called his former coach — Pitt football head coach Pat Narduzzi.

Narduzzi hired Officer as an offensive graduate assistant, tasked with helping develop the offensive line. Officer said one of the things he learned through his coaching experience is that showing he cares about his players can go a long way.

“I think a big thing for me also, watching these guys grow, is just that you don't realize how much the little things mean to some of these guys,” Officer said. “And those little things that you do for them, they'll remember and take them with them.”

As an offensive line graduate assistant coach, Officer also manages the defensive scout team. The team helps the offense prepare to face the opposing defense, and coaches can’t guarantee they’ll see the field come game day. But according to Officer, these players take on an important role in day-to-day preparations every week. Every once in a while, Officer will bring in snacks — sometimes doughnuts — as a token of his appreciation for the work they put in.

“They're probably the most hardworking guys in our building,” Officer said. “I mean, they do a lot of tough stuff every day … that little thing that you can do to kind of boost morale in that building once a week, it definitely helps.”

While Officer appreciates those willing to work hard, he’s always transcended his coaches’ and family’s expectations for him, according to his older brother Jerome Lewis. Lewis laughed as he reminisced about Officer playing his final high school season with a torn shoulder labrum. Lewis said his brother didn’t want anyone to find out or draw any attention to himself — especially from his mother, who wasn’t aware of the injury.

“Alex was crazy when his senior year he played the entire season with a torn labrum,” Lewis said. “It just kind of shows how Alex is. He knew that they needed him to win a championship. And rather than having the surgery and losing him for the year, he decided he was going to keep quiet because of who my mom was … she would’ve said, ‘You’re done with high school football.’”

Lewis said that’s just who Officer is — someone who is always going to work to achieve great honors, but who wants to do so quietly and under the radar.

“Alex is very introverted,” Lewis said. “The reason Alex played with a torn labrum is because Alex will have the torn labrum and won't say anything to anyone.”

Officer quickly turned heads playing high school football in his hometown of Rochester, New York, rising to the No. 6 overall prospect in the state. The high school three-star recruit held offers from multiple power-five teams, including ACC foes Syracuse and Boston College. But Officer said one aspect of Pitt’s culture set it apart from the rest and made him inclined to join the Panthers — family.

“When I first got here, my official [visit] was just a big family feel here,” Officer said. “As soon as I got here, they made me feel like home, and it was close enough for me to get away [from home] but close enough to still be around and enjoy my family.”

Officer said this tightknit and family-like culture has not wavered one bit since he came back as a coach.

“Once you step in [Pitt’s football facility] and come into Pitt, you know what love and family is like,” Officer said. “You get that every day, whether it's coaches or players. I feel like we have a great atmosphere. It's a great feeling around here. I think that’s why we were so successful last year.”

Narduzzi helped lead the charge to raise awareness for Officer, putting “A.O.” stickers on the Panthers’ helmets in his honor and endorsing a GoFundMe page to help pay for cancer treatments in 2018. Similar to his family’s view on Officer, Narduzzi said his former offensive lineman is always going to get the job done and do it quietly.

“Our hearts and prayers are with that family, with [Officer] … we’re trying to help him along this process because he’s a forever Panther,” Narduzzi said in 2018, when he learned of the diagnosis. “A.O. is quiet, he’s tough.”

Family plays a large role in Officer’s life, and having a “second family” in Pittsburgh was crucial for him when he was deciding where to commit. He said coming to Pittsburgh and joining the Pitt family was one of the best decisions he ever made. Erturkmen said having a city that was “family-oriented,” on top of the Pitt football program, in her partner’s corner during Officer’s cancer battle helped them immensely.

“I wouldn't have wanted any other school, team or city to have gone through this with or been a part of because truly, it's been such a loving experience in its own odd way given the circumstances,” Erturkmen said. “I know that even 10, 20 years down the line if we don't live here in Pittsburgh, I know that he can walk into those halls and into that facility and feel that same sense of home and family that he feels now.”

Narduzzi did not have to bring back Officer to help with his team, but the head coach makes an effort to build a close-knit family inside of his locker room, according to Lewis. Lewis said he and his family are forever grateful for everything Narduzzi has done for Officer before, during and after his battle with cancer.

“A lot of times these coaches preach that you're more than an athlete to them, but once you graduate, or once you're done playing ball, you can't feel the love,” Lewis said. “That's the complete opposite with Pat Narduzzi. My family and myself, we're completely indebted to him and what he's done and how much he's giving my brother an opportunity to continue doing something he loves.”

According to his brother, Officer has goals of one day leading a football program himself. Lewis said a perfect ending would be for Officer to someday become the head coach at Pitt.

“I talk to him about his dreams and how he wants to potentially come back one day and be the head guy at Pitt,” Lewis said. “You know, your story being you played here, the guys you played with and just the way things happened for you. That'd be a great story.”

The dreams and goals are lofty, but one of the sayings Officer lives by is “great things don’t come easy,” according to Erturkmen. Her partner has always had to deal with adversity from a young age, and she thinks if anyone can achieve these goals, it’s Officer.

“I just know that the greatness he wants to accomplish isn't going to come easy, it's not going to be something that happens overnight,” Erturkmen said. “I know, sometimes it gets really drawn out to say it like that, but truly he's been such a motivation and such an incredible person to really demonstrate all those things.”

His job description never explicitly says it, but Officer said one of the tasks he values the most is to guide and grow the next great Pitt men.

“I think a Pitt man is a tough guy,” Officer said. “He’s tough. He’s humble. I think he's willing to do whatever it takes to be successful.”

Lewis said his brother is just that — a Pitt man.

“We didn't know [Officer] would be coaching as soon as it was,” Lewis said. “Just seeing the work that he's putting in and how much he loves being around the University of Pittsburgh — when they say ‘proud Pitt man,’ he is a proud Pitt man.”